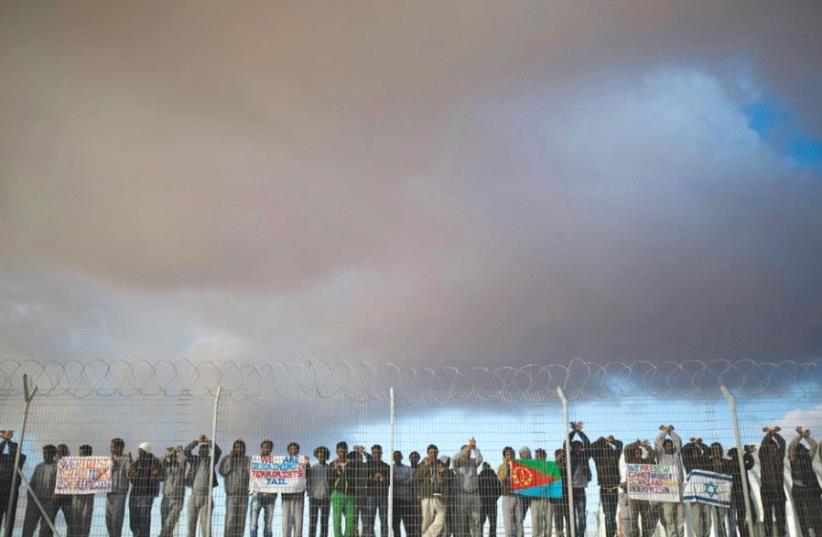 AFRICAN MIGRANTS being held at the Holot detention center in the Negev demonstrate last month for better conditions.
(photo credit: REUTERS)
Advertisement
The Anti-Defamation League and the refugee protection group HIAS have sent an open letter to Prime Minister Benjamin Netanyahu expressing “grave concerns” over a government plan to deport or imprison tens of thousands of African asylum- seekers in March.Approximately 35,000 Eritrean and Sudanese asylum- seekers live in Israel. Among their 13,764 asylum applications submitted since 2013, only 11 have been approved by the Interior Ministry as of July 2017 – 10 Eritreans and one Sudanese.The ministry’s Population, Immigration and Border Authority has yet to review the vast majority of applications amid an aggressive ongoing campaign to deport the endangered community, whom the prime minister’s coalition dismisses as illegal “infiltrators.”The government’s plan offers African migrants a $3,500 payment and a free air ticket to return home or go to “third countries,” which rights groups identified as Rwanda and Uganda. Migrants who decline face indefinite incarceration.“We understand that the option of deporting them by force is also being considered by the government,” wrote ADL CEO Jonathan Greenblatt and president and CEO of HIAS Mark Hetfield. “The sweeping nature of this deportation scheme, coupled with the extreme difficulty to access the Israeli asylum system, is having a devastating impact on the refugee community in Israel and betrays the core values that we, as Jews, share.”ADL and HIAS have advocated for a realignment of Israel’s refugee policies with international norms, including the 1951 Refugee Convention. This includes pursuing policies which seek to approve asylum requests of refugees who are genuinely fleeing from violence and persecution in their countries of origin, and allowing asylum- seekers and refugees the legal opportunity to earn a living in Israel until it is safe for them to return home.“Our objections to the new Israeli government plan stem from numerous reports which indicate that those asylum-seekers who previously left Israel have been unable to return safely to their home countries, and many have encountered violence and inhumane living conditions in countries they have sought refuge in,” the letter continued. “Testimonies of people who were relocated by Israel to third countries in Africa indicate that they did not find durable protection there and risked their lives by taking dangerous onward journeys through conflict zones in South Sudan, Sudan and Libya to seek protection elsewhere. Some have drowned at sea en route to Europe, while others were reportedly detained, tortured and extorted by human traffickers.”Those forced to leave Israel under the current Israeli plan, they said, will likely face similar conditions and challenges.“As American Jews, one of our greatest concerns is the well-being and security of Israel; we want to see it prosper and overcome all of the challenges its precarious location imposes on it,” the letter read. “We also care about our shared Jewish values and refugee heritage – a very human concern that reaches across borders and distances – and unifies us as a people.”The letter follows another that was sent to Netanyahu last week, and an initial one in November, urging him to allow North American Jews to help address the matter. Signatories of that letter included Hetfield; Rabbi Jill Jacobs, executive director of T’ruah: The Rabbinic Call for Human Rights; Rabbi Jonah Dov Pesner, director of the Religious Action Center of Reform Judaism; Jeremy Ben- Ami, president of J Street; and Nancy Kaufman, CEO of the National Council of Jewish Women.Daniel K. Eisenbud and Reuters contributed to this report.