VP of New Israel Fund: Country ‘was rejecting me’ 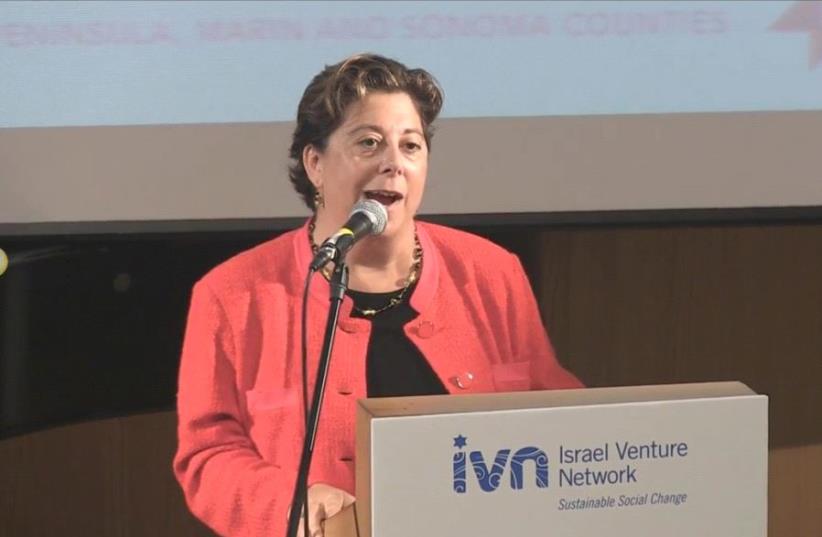 Jennifer Gorovitz, VP of the New Israel Fund
(photo credit: YOUTUBE)
Advertisement
New Israel Fund official Jennifer Gorovitz was delayed and questioned at Ben-Gurion Airport upon her arrival to Israel this week, in what the NIF has called an “apparent act of political targeting by border security.”Gorovitz is vice president for finance, operations and administration at the US-based NIF and was previously CEO of the San Francisco Jewish Federation. She arrived in Israel on Wednesday in order to participate in the annual meeting of NIF’s international board in Jerusalem.“It was a really terrible experience,” she told The Jerusalem Post on Thursday.“I did feel that this country, which I had learned from childhood was my ‘safe place’ as a Diaspora Jew, and for which I have advocated and raised money for most of my adult life, felt like it was rejecting and refusing me,” she said.Gorovitz arrived at passport control along with a friend from San Francisco, who went through first without any problems.“Then when it was my turn the passport control officer took my passport and started asking me many questions about my job, the organization I worked for, who I was going to meet with in Israel and so on,” she recounted.“I explained I am the VP for administration and operations for the New Israel Fund, that my planned meetings were with staff of NIF and Shatil [the NIF division that advises nonprofit organizations] – which he didn’t believe, he insisted I was going to do ‘field work,’” she said.At this point, the officer asked her for a list of every person she would be meeting with during her visit, and was not satisfied with her responses.“He asked what Shatil does, and I said we work on civil society, and he said: ‘Ya, civil society for Palestinians,’ and I replied: ‘No, for all Israelis,’” she said.According to Gorovitz, she told the officer that she was a “Jew and a Zionist,” to which he replied: “Zionist.... right” before transferring her to a holding area.Following a half hour wait she was interviewed for the second time, by a female officer.“I did notice that on her interview sheet, which was in Hebrew, were three English letters I know well – BDS. I told her that NIF is not a BDS organization, that as a matter of policy we do not fund any organizations involved in global BDS. I referred her to our website. She said she would check it,” Gorovitz explained.The officer also questioned her about her family before sending her to another holding area, where after another half an hour she was interviewed by two men in civilian clothes.“I was very forthright about my background, a long-time Zionist who has been raising money for Israel since my 20s and who served as CEO of the San Francisco Federation, someone who has led lay missions to Israel. None of this seemed to impress my interrogators, who were more interested in who NIF funds and other questions related to the organization,” she said.She was released after approximately 90 minutes in total and after pressure was exerted by several NIF-affiliated individuals, including NIF president Talia Sasson, former head of the Special Tasks Division in the State Attorney’s Office.Sasson was told that Gorovitz was being detained for “national security reasons.”“I do know that I’ve never heard of another leader of a well-known American Jewish organization stopped at the Israeli border, and that all the questions directed at me were related to my work for a progressive organization that has been outspoken in its criticism of many government policies,” Gorovitz said of her detainment.When asked if she was concerned regarding future visits to Israel or for her colleagues, Gorovitz said she was “angry and saddened by the atmosphere of intimidation of opposing viewpoints and free expression.“I’m concerned about an atmosphere in which a private gallery hosting Breaking the Silence can be threatened with shut-down by the mayor of Jerusalem. And that the prime minister thinks this small group of former combat soldiers is so worrisome that he has to threaten both the British and Belgian prime ministers about them,” she said alluding to a lecture given on Wednesday by left-wing NGO Breaking the Silence at the Barbur Gallery in Jerusalem.“I’m worried that the activists that we support are finding themselves threatened with personal lawsuits and that Arab protesters are confronted by police with guns while Jewish settler protesters who are behaving violently are handled gently,” she said.“All these things worry me for my Israeli colleagues and friends but even more for Israel itself, and the direction it’s headed in.”Amnon Shmueli, acting director-general of the Interior Ministry’s Population and Immigration Authority, spoke with Sasson on Wednesday, reiterating the authority’s stance that questioning Gorovitz was a routine procedure.He went on to apologize for any distress it may have caused her.In an earlier statement, the Population and Border Authority did not provide reasoning for stopping Gorovitz except to say that “the need arose to conduct a more professional questioning,” and that she was released after a “delay of less than one hour.”“The procedure is a required professional procedure and there was no intention to cause distress to the passenger,” the statement said.Sabine Haddad a spokeswoman for the authority, told the Post that the NIF official was not asked about BDS affiliation and the topic was not mentioned during questioning.On December 5, Israel denied entrance to an NGO official due to alleged BDS support for the first time – Dr. Isabel Apawo Phiri, a citizen of Malawi who is assistant general secretary of the World Council of Churches.At the time, Interior Minister Arye Deri said he would use his authority to prevent the entrance of BDS activists to Israel.