What did Netanyahu ask Dershowitz about the O.J. Simpson trial?

Dershowitz, who served as an appellate lawyer for Simpson, had unique insight into the trial and Netanyahu prodded for particulars. 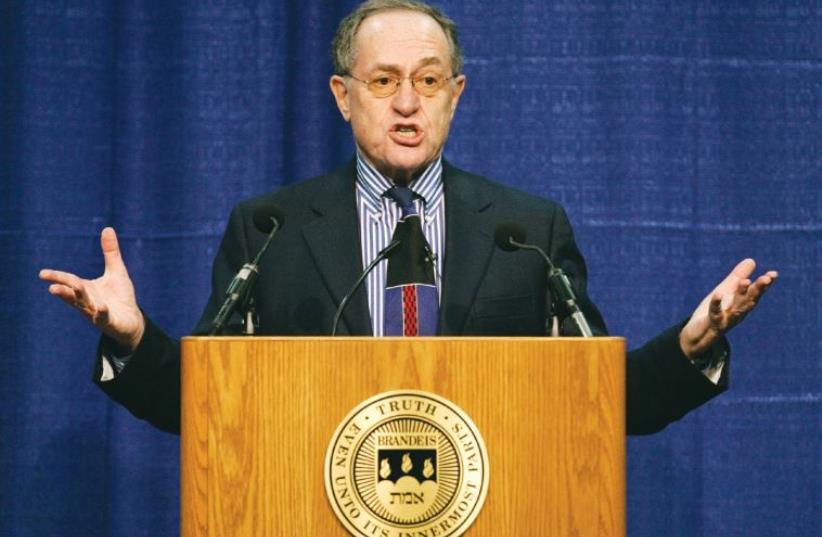 Alan Dershowitz
(photo credit: REUTERS)
Advertisement
Well known Jewish litigator and avid Israel supporter Alan Dershowitz revealed a number of excerpts from an upcoming memoir chronicling his illustrious career as a top-notch lawyer, The New York Post reported Thursday, detailing a number of anecdotal encounters centering on celebrities, dignitaries and politicians, including one story involving Prime Minister Benjamin Netanyahu and infamous former NFL running-back OJ Simpson. As Dershowitz recounts, the prime minister had once pulled the Harvard Law professor aside during a meeting to ask about the OJ Simpson verdict that captivated the US for a brief period in the 1990's. Dershowitz, who served as an appellate lawyer for Simpson during the trial, had unique insight into the case and Netanyahu prodded for particulars ."Benjamin Netanyahu had just been elected prime minister for the first time and I'm in Israel," Dershowitz recalls. "So he calls me into the office and he says, 'I want to go to the secret office where no one can can overhear. I want to ask you something'I thought he was going to ask me about Iran's nuclear program. He said, 'So, did OJ do it?'I said, 'Mr. Prime Minister, does Israel have nuclear weapons?' And he said, 'Alan you know I can't tell you that.' And I said, 'Aha! You know I can't tell you that."Dershowitz later reveals that the verdict acquitting Simpson had surprised him."I never thought we were going to win. I was always prepared to do the appeal," he said.Dershowitz also shares stories about famous Jewish figures such as Hollywood director Woody Allen and former chess champion Bobby Fischer.According to The New York Post, a mutual friend arranged a lunch between Dershowitz and Allen as a birthday present for the lawyer. When Dershowitz revealed this, Allen pondered who he would choose to have a meal with.“Louis Armstrong,” Allen began“He’s dead,” Dershowitz responded.“Exactly. Jimmy Hoffa would be my second choice.”“He’s missing.”“Exactly,” he repeated.Allen then asked Dershowitz which historical figure would he have liked to represent. “Jesus,” the lawyer replied.“Do you think you could have won?”“In front of a Jewish jury, maybe.”