Ayalon calls on UN to impose oil embargo on Iran

Deputy FM asks Colombia, which chairs the UN committee that oversees sanctions on Iran, to push for an embargo of Iranian crude "without delay," calls for increased energy output.

Deputy Foreign Minister Danny Ayalon called on the UN Thursday to implement an oil embargo on Iran to pressure the Islamic Republic over its controversial nuclear program.

Meeting with senior officials in the Colombian capital of Bogota, Ayalon said it was important the South American country push for an embargo of Iranian crude "without delay," according to a press release from his office.

Colombia chairs the UN committee that monitors UN sanctions on Iran and Sudan, and is a non-permanent member of the UN Security Council.

While the UN has slapped sanctions on Iran that include an arms embargo and the freezing of Iranian assets, the international body has yet to target the Islamic Republic's important energy sector, such as the European Union decided to do last month.

Addressing fears that increased sanctions against Iran may lead to a regional crisis that could send oil prices soaring, the deputy prime minister called on the Latin American nation, a major oil exporter, to increase its output to prevent such a shock to energy markets. 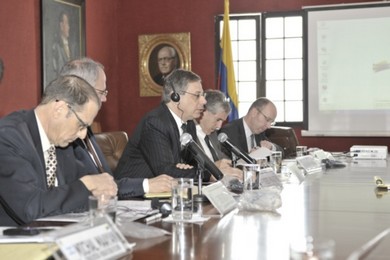 Ayalon meets with Colombia diplomats in Bogota
Ayalon thanked Colombia for supporting the diplomatic process with the Palestinians, and for its opposition to unilateral moves by the Palestinian Authority, such as the PA's bid to join the United Nations.

"Colombia is a strategic partner of Israel's in Latin America, and a strong partner for improving global security and stability," Ayalon told the Colombian diplomats.