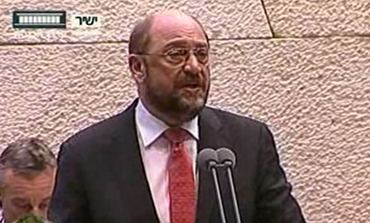 European Parliament President Martin Schultz on on Thursday defended the speech which he delivered to the Knesset Wednesday, saying, "I could not only say things which would please everyone, my job is to present the position of the [European] Parliament." Schultz's address to the Knesset on Wednesday was received with a stinging reaction from Economy Minister Naftali Bennett and his party, Bayit Yehudi, who stood up and walked out in the middle of the chairman's speech."I was surprised and concerned by the harsh reaction, because I have given a speech that was pro-Israel'" Schultz contended, stating to the German Newspaper Die Welt, "The extreme right wing party of the settlers" acted shamefully. The European Parliament president went on to say that the Israeli 'right wing' has received US Secretary of State John Kerry and his work on brokering a peace deal in similar fashion. The president's thoughts were mirrored by MK Eitan Cabel (Labor) who was quoted on Israel Radio as saying, "The departure of Bayit Yehudi was embarrassing" and that we must "cease to react with blind aggression to anyone who may disagree with our point of view. "During his speech, Schultz criticized the blockade of Gaza and Jewish settlements in the West Bank. However, his remarks regarding the consumption of water allowed to Palestinians was what set off the angry responses by some Knesset members. Schultz's statement was, "A young Palestinian asked me why Israelis can use 70 liters of water and Palestinians only 17. I didn't check the data. I'm asking you if it's right."

Schultz admitted that he had not checked the figures.Prime Minister Binyamin Netanyahu's response was regarded as "monotone" by Germany's Die Welt, quoting the prime minister's response, "The chairman, like many Europeans suffers from selective hearing," adding that "Schulz admitted that he didn't check if what he said is true, but he still blamed us. People accept any attack on Israel without checking it."Lahov Harkov and Sharon Udasin contributed to this report.
Advertisement
Subscribe for our daily newsletter