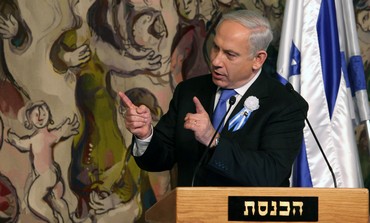 Prime Minister Binyamin Netanyahu makes Knesset address (Marc Israel Sellem)Several monumental bills that can make or break the coalition are on the Knesset’s docket for its challenging winter session, beginning Monday afternoon.The winter session will officially begin with speeches by Knesset Speaker Yuli Edelstein, President Shimon Peres, Prime Minister Binyamin Netanyahu and opposition leader Shelly Yacimovich of Labor.Tweets from @jpostdesk/knesset-winter-session
Netanyahu is expected to speak about diplomatic progress in months since the Knesset was last in session, focusing on peace talks with the Palestinians and the Iranian nuclear threat.Some of the issues lawmakers are expected to bring to a vote in the coming weeks include haredi enlistment, turning the requirement of a referendum on peace talks into a Basic Law, electoral reform, regulating Beduin land claims in the Negev and replacing the antimigration law overturned by the High Court of Justice last month.Coalition chairman Yariv Levin (Likud-Beytenu) said Sunday that he expects the bills to pass in the next month.“It is fundamental for the coalition’s stability that these bills pass together within a short time,” Levin said.Levin, who has one of the toughest jobs in politics, will have to find ways for the coalition’s parties – Likud, Yisrael Beytenu, Yesh Atid, Bayit Yehudi and Hatnua – to work together and follow coalition discipline despite their divergent views on matters ranging from peace talks to religion and state.“Yesh Atid and Hatnua will have to agree to vote for the Referendum Bill, Likud and the Bayit Yehudi will have to move toward Yesh Atid’s position on haredi enlistment, and everyone in the coalition will have to support more of Yisrael Beytenu’s electoral reform [for the coalition to survive],” Levin explained.“The parties have to find ways to compromise on these issues, or we won’t be able to work together,” he added.Levin pointed to the “deadlock” of the previous Knesset session, in which none of the aforementioned major bills were passed because of friction within the coalition.“I hope we won’t see more of that now,” the coalition chairman added.As for tension between Yesh Atid and Bayit Yehudi, who formed a partnership earlier this year, Levin said “their differences were obvious from the beginning, but they protected each other from [Netanyahu] throwing them out of the coalition and replacing them with Shas, UTJ and even Labor. That mutual interest is still there, so the collaboration will likely continue.”Each party may threaten to leave the coalition, Levin explained, but parties will have little reason to actually do so, unless real progress is made in peace talks leading to settlement evacuations or construction freezes, which Bayit Yehudi and much of Likud would not be able to abide.As for haredi enlistment, the coalition chairman posited that while Likud and Bayit Yehudi will have to give in to some of Yesh Atid’s demands, Finance Minister Yair Lapid’s party will have to stop turning the bill into a way to defeat the ultra-Orthodox parties.“Yesh Atid need this clash because they want to be seen as fighting for something, but it’s not good for Israel as a whole or even for solving this issue,” Levin stated. “We need more good will in the process.”Levin committed to trying to find a way for Yesh Atid to “achieve something and pass a good law” while “implementing the things that are important to the haredim.”Despite the challenges ahead, Levin maintained an optimistic outlook, saying “there will be obstacles, but we will manage to get past them and finish the session as we started.”
Advertisement
Subscribe for our daily newsletter