PM "not impressed with greetings coming from a regime that only last week threatened to annihilate the State of Israel."

By TOVAH LAZAROFF
SEPTEMBER 7, 2013 20:07
Netanyahu looking menacing 370
(photo credit: Marc Israel Sellem/The Jerusalem Post)
Advertisement
The international community should not be deceived by Iran’s Rosh Hashana greeting and should focus instead on Tehran’s continued pursuit of nuclear weapons, Prime Minister Binyamin Netanyahu warned on Saturday night in response to a surprise holiday twitter blessing from Israel’s arch enemy.“I am not impressed by the blessings uttered by a regime that just last week threatened to destroy the state of Israel,” Netanyahu said.On Wednesday, in a surprising move, Iran’s newly elected President Hassan Rouhani appeared to send out a Rosh Hashana greeting on a twitter account under his name, along with a photograph of a Jewish man praying with a skullcap and a prayer shawl.“As the sun is about to set here in #Tehran I wish all Jews, especially Iranian Jews, a blessed Rosh Hashana,” the tweet said in English. 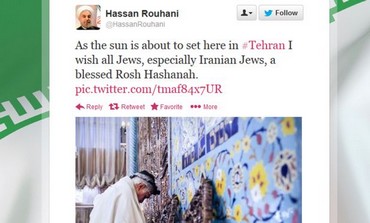 A Rosh Hashana greeting was sent out in Persian on Thursday from that same Rouhani account.The account also retweeted a message in English from Iran’s Foreign Minister Javad Zarif, who on Thursday simply wrote in English on his twitter, “Happy Rosh Hashana.”Zarif had just opened an English twitter account, and the Rosh Hashana blessing was his second tweet in the account.Christine Pelosi, the daughter of the American politician, House Minority Leader Nancy Pelosi (D-San Francisco), responded to Zarif’s tweet.“Thanks. The New Year would be even sweeter if you would end Iran’s Holocaust denial, sir. “@JZarif: Happy Rosh Hashana,” she wrote.

@sfpelosi Iran never denied it.  The man who was perceived to be denying it is now gone. Happy New Year.
&mdash; Javad Zarif (@JZarif) September 5, 2013

Zarif sent a twitter message back to her, that said, “Iran never denied it. The man who was perceived to be denying it is now gone. Happy New Year.”His message appeared to allude to the departure of former Iranian President Mahmoud Ahmadinejad who was known for denying that the Holocaust had occurred.According to Iran’s Fars News Agency Rouhani did not sent out a Rosh Hashana greeting. His adviser Muhammad Reza Sadegh told the agency, “Mr. Rouhani does not have a twitter account.” He explained that the twitter pages with Rouhani’s name on it were opened by his supporters during the election.“Of course, such activities are fully normal during election campaigns, and some of them might continue their operation even after the election,” Sadegh told Fars.“Any official news on him [the president] is released by the presidential office,” Sadegh told Fars.A close aide to Rouhani, however, told CNN’s Christiane Amanpour that while the president does not tweet from his account, people in his office do, so it is semi-official.According to Twitter there are two accounts for Rouhani, one with 7,498 followers and one with 34,491 followers. The Rosh Hashana greeting came from the larger account.Still, Netanyahu took the issue of holiday greetings from Tehran seriously enough to issue a response of his own.“The Iranian regime will be examined only in his actions and blessings that aim to divert attention from the fact that even after the elections, it continues to enrich uranium and to build a plutonium reactor with the aim of developing nuclear weapons that will threaten the state of Israel and the whole world,” Netanyahu said.“The international community must not fall for illusions. It must demand actions from Iran, not words. It must step up pressure,” Netanyahu said.
Advertisement
Subscribe for our daily newsletter