Peres: "Terror is a danger to Arabs as much as it is to Israel"; says nuclear policy on Iran should follow example of dismantling weapons in Syria.

By MICHAEL WILNER
President Shimon Peres with US President Barack Obama at the White House
(photo credit: OFFICE OF THE PRESIDENT)
Advertisement
WASHINGTON – Shimon Peres visited the White House on Wednesday for the last time as president, capping a career spanning decades in diplomacy with 10 American leaders.During the working meetings – which included a 45-minute roundtable with US President Barack Obama and American-Jewish community leaders followed by an hourlong lunch and private Oval Office sit-down with Obama – conversation focused on negotiations with Iran over its nuclear program, the harrowing developments in Iraq and the stalled peace process between Israel and the Palestinians. 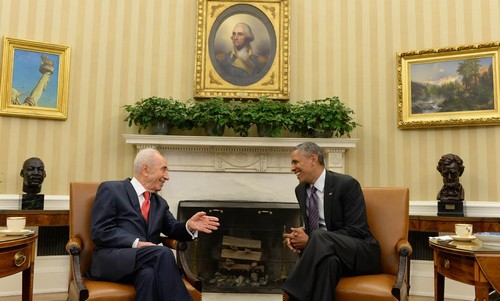 President Shimon Peres with US President Barack Obama at the White House/OFFICE OF THE PRESIDENT
“Terror is a danger to Arabs as much as it is to Israel,” Peres told members of the press after the meetings.Also in attendance at some of the sessions were US National Security Adviser Susan Rice, Israeli Ambassador Ron Dermer, US Ambassador to Israel Dan Shapiro, and Martin Indyk, America’s special envoy to the Middle East for Israeli-Palestinian negotiations.Obama began his conversation with Peres with well-wishes for the three teenage boys kidnapped in the West Bank, one Israeli official said.According to Peres, Obama told him: “Our hearts are with the kidnapped teens and the nation of Israel. From the moment the abduction occurred there has been coordination between the US and Israel. The US will continue to help and to do whatever it can together with the State of Israel in order to return the kidnapped teens to their homes.”Peres also updated Obama about Israel’s search for the teens.Obama told Peres he wanted the Israeli people to trust the steadfastness in his opposition to Iran’s acquisition of nuclear weapons.Israeli officials confirmed that the two discussed how they expected the negotiations in Vienna over the Iranian program to unfold – but said that details of that conversation would remain private.Negotiations between Iran and the P5+1 – the US, United Kingdom, France, Russia, China and Germany – toward a comprehensive solution to the crisis are set to expire on July 20.To journalists, Peres said the Israeli government hoped for a deal with Iran that would be similar to that reached with Syria over it’s chemical weapons – the complete dismantling of infrastructure and the removal of worrisome materials.“The best way to reach an agreement is [to] follow the example of Syria,” he said.His comments echoed those that Prime Minister Binyamin Netanyahu made over the weekend, in which he referred to the Syrian agreement, brokered by Russia, as a “good deal.”Israel would then, and only then, support the international community’s revisiting sanctions, Peres said.On Iraq, the two leaders agreed that the embattled country – facing an onslaught from the Sunni terrorist group ISIS – should remain united. But Peres said that sectarian concerns were a concern not just for the Arab world, but for the entire region – and for the United States.