Peres on Iran: We don't want another Hiroshima in our time 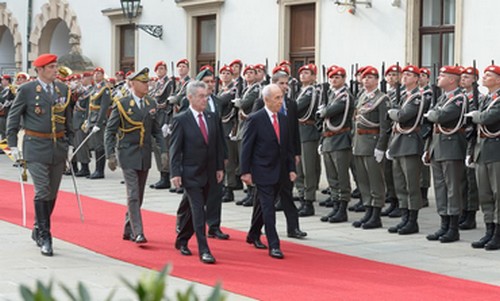 President Shimon Peres met with his Austrian counterpart Heinz Fischer in Vienna on Monday, discussing the present policies of Iran in the same breath as Adolf Hitler.Peres said that we must head from an old world of killing and violence to a world that will respect the life of all people without any discrimination or threat.Speaking of Iran as the greatest threat to world peace, Peres said, "They are building nuclear missiles that can go 2,000 kilometers. What for? Nobody in the world is threatening Iran. Iran is threatening other people, why should they threaten?"
Peres said that the change in tone by Iranian President Hassan Rouhani is not enough. He said that Iran supports Hamas and Hezbollah terror. "Why do they have to support killing and blood?" Peres asked.The president said that while diplomacy and sanctions will hopefully thwart Iran's nuclear ambitions, all options must remain on the table. "Nobody wants to see another Hiroshima in our time," Peres said, adding that Iran has the opportunity to become a "normal nation, like everyone else."The visit to Austria marks one of Peres's last trips abroad as president of Israel.
Peres and Fischer will also attend a memorial ceremony at the monument for victims of the Holocaust, proposed by Nazi hunter Simon Wiesenthal and unveiled in 2000. Located in the Judenplatz, the center of Jewish life in Vienna, it was created by British artist Rachel Whiteread in the form of books turned inside out, in defiance of the book-burning by the Nazis.
Following the ceremony, Peres will attend a festive gathering organized by the Jewish community of Vienna.Greer Fay Cashman contributed to this report
Advertisement
Subscribe for our daily newsletter