A dialogue with philanthropist and social activist Matthew Bronfman. 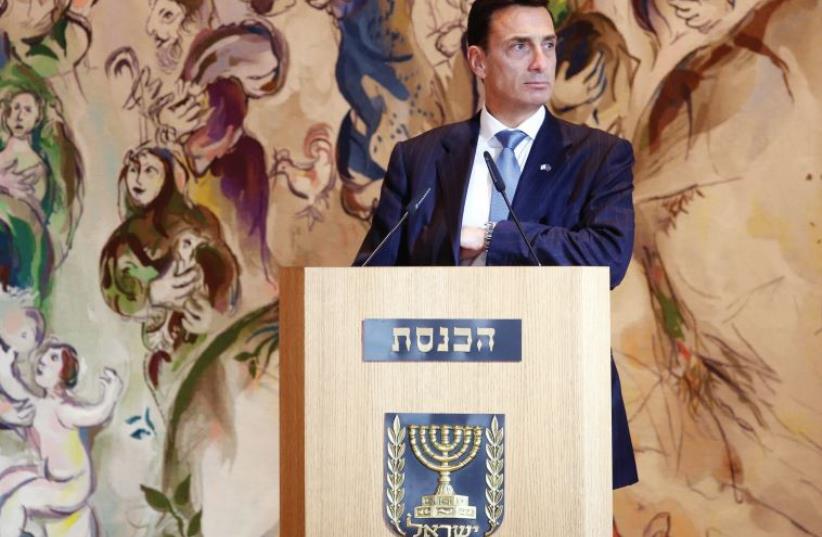 Matthew Bronfman
(photo credit: MARC ISRAEL SELLEM/THE JERUSALEM POST)
Advertisement
Matthew Bronfman comes by philanthropy and Jewish activism naturally. The son of former World Jewish Congress president Edgar Bronfman, Sr., Matthew sits on the boards of a range of Jewish organizations, including the Treetops Foundation, the 92nd Street Y, the American Jewish Committee’s ACCESS program and Limmud FSU, which focuses on connecting post-Soviet Jews with their cultural and religious heritage. Bronfman is also one of the largest foreign Jewish investors in Israel, holding major stakes in Israel Discount Bank, the local branch of IKEA and other corporate giants.He met with The Jerusalem Post in his capacity as chairman of the international steering committee of Limmud FSU at a recent Knesset ceremony marking 25 years of Russian immigration to Israel.Can you discuss some of the challenges facing the Jewish community and their relevance to the diplomatic community? I guess I would start by saying that the work that we do at Limmud FSU is geared toward trying to connect the Russian-speaking Jewish community to each other, to the Jewish community around the world, and to their Jewish heritage.We think that this is important because after 70 years of Communism, there is a lack of knowledge and understanding of cultural and religious history, which wasn’t able to be taught and passed down in a serious, thoughtful way. What we try to do at Limmud FSU is to take those young, smart Jews and try to reconnect them in some way. It can be through politics. It can be through Torah. It can be through dance. It can be through philanthropy. It can be through anything. In each case, we seek the avenue that will work best.One of the things that is successful and differentiates Limmud FSU (and Limmud in general) from most organizations is that it is participant-driven.It is not driven by the funders or the founders. And I think this is a key to success – to buyin – for any movement. If we are talking about diplomats and how one gets things accomplished, it needs to be from the ground up. People talk about leading from behind.We need to think, in a way, “Yes, we create the leadership committees, but then they must take over and own it.”As we look to the challenges that the Jewish community faces, both in terms of intermarriage and BDS [boycott, divestment and sanctions against Israel], the root challenge in the Diaspora is to figure out a way to connect Jews to Judaism. Then they can be involved in the broader challenges that the Jewish people face.There are those who say that the Russian speakers, with their own unique approach to Jewish identity (tribal rather than religious), could be more resilient in terms of their identity than those from the West.Is there any truth to that in your opinion? I agree with the first part of the proposition, which is that there is more of a cultural tribal element, partly because the religious part [of their identity] was repressed for two or three generations. They don’t have that as part of who they are. Hopefully we can re-reintegrate that. Not because we have to, but because it is part of who we are.I think that is the reason why, in the Diaspora, the Russian Jewish communities have not fully integrated into some of the broader Jewish communities, because their cultural component is more resilient. America and Canada are the great melting pots, [but] on the other hand we have seen a great wave of tribalism coming back throughout the world, whether that is a good thing or not.I think the way to describe Americans today is like a patch-quilt where you can be both Jewish and American and don’t have to give up the Jewish identity to be American. You can be bi-identified, dual-identified perhaps.I can be an American and I can be a Jew. I can be American and Italian.The real goal as someone involved in Jewish life is for the Jewish community to come together, because the challenges are formidable.One of the key challenges for Jewish communities in the Diaspora is to work with and be heard by the politicians and the diplomats in Israel, because we have a different perspective.Perspective is valuable. Not that we could or should ever tell the Israelis what to do, but I think they need to listen to what we have to say about how their actions affect our ability to help them in their quest for legitimacy when it comes to the forums of the UN, the EU, etc. I think that it is imperative for them to at least listen and understand the perspective of the Diaspora Jewish community.You are talking about a strengthened dialogue? Yes, I am.Do you believe this would allow for a stronger defense of Israel in international forums? Absolutely. There is no question that it would.I sit on the executive of the American Jewish Committee. We travel the globe fighting for Jewish rights, for Israel – for bilateral relationships between whatever country it is we are visiting and Israel. In all of the countries, we talk about support for Israel in international forums. That’s not always an easy task; I think that a more open and fruitful dialogue between Jewish leaders in the Diaspora and Israelis could help both sides.
The Jerusalem Post Diplomatic Conference, a prestigious forum where some 400 ambassadors, ambassadorial spokespeople and military attachés from around the world will convene, takes place at the Waldorf, Astoria Hotel in Jerusalem on Wednesday, November 18. The conference, featuring an array of speeches from Israeli newsmakers, including Prime Minister Benjamin Netanyahu, will be broadcast live on Jpost.com.