"The way in which animals suffer and die for fur violates Jewish principles," the actress and PETA activist writes to Netanyahu after second visit to Israel.

Following a trip to Israel last week, actress and PETA activist Pamela Anderson sent a letter on Wednesday to Prime Minister Binyamin Netanyahu asking that he support a bill to ban the fur trade.

“I am especially thrilled to know that your country is considering a bill to ban the sale of fur, similar to legislation passed in West Hollywood, California,” Anderson wrote.“I’m writing to urge you to do everything in your power to help pass this historic bill, which has been signed by 40 members of the Knesset and includes an exemption for religious purposes.” 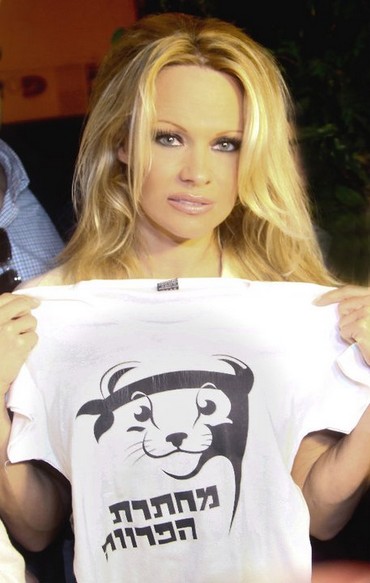 The bill in question, submitted by MKs Ruth Calderon (Yesh Atid) and Nitzan Horowitz (Meretz) in June, proposes adding a regulation to the Animal Welfare Law that would prohibit the sale – though not the import – of fur products, with an exception made for religious items like streimels and products necessary for scientific research. Initiated by the head of the Israel-based International Anti-Fur Coalition, Jane Halevy, the bill has garnered the support of approximately 40 Knesset members.

The proposed legislation follows in the footsteps of another anti-fur bill introduced in July 2012 by then-MK Ronit Tirosh (Kadima), which suggested a slightly stricter ban on fur sales and imports, with the same exceptions made for traditional religious customs and for scientific purposes. Tirosh’s bill received the support of eight Knesset members but failed to move forward before the change in government.Calderon and Horowitz’s bill discusses how hundreds of millions of animals reach their deaths each year due to the fur industry, in methods that involve “cruelty and unspeakable suffering.” Used primarily in the fashion industry, fur has little place in a hot country like Israel, and there are many synthetic replacements for cold weather, the bill argues.“In Israel, there is a broad public consensus that the killing of animals for their fur is an act contrary to morality,” the bill says.Advocating the anti-fur bill is not Anderson’s first participation in Israel’s animal rights movement. During a trip to Israel during March 2011, she participated in an animal rights demonstration in Tel Aviv in front of the vegan Buddha Burger restaurant. PETA vice president Dan Matthews joined her at the rally, distributing PETA flyers of a bikini- clad Anderson with different parts of her nearly naked body labeled in Hebrew, with the slogan, “in all living things, there are the same organs.”At the time, Anderson praised Israelis – and particularly the animal rights activists – for their passion, telling The Jerusalem Post that she enjoys that Israelis “talk about important things” rather than partaking in small talk.In her Wednesday letter to Netanyahu, Anderson quotes the prime minister himself as saying that he feels “committed to increase awareness to fight cruelty toward animals.”She also provides him with a link to a PETA video depicting workers in the Chinese fur industry, which shows animals being stepped on, electrocuted and skinned alive for their fur.“I hope you’ll agree that the way in which animals suffer and die for fur violates Jewish principles, which strictly prohibit causing animals unnecessary suffering,” she writes.“There’s so much violence among humans that is so difficult to stop, but passing a ban on fur is one easy way to eliminate some of the senseless violence that we inflict on animals.”
Advertisement
Hot Opinion