Relations between Cairo and Hamas have been strained for months, but with Egypt's decision to begin work on an anti-smuggling barrier, tensions have now reached a boiling point.

By KHALED ABU TOAMEH
JANUARY 14, 2010 21:32
Palestinian Hamas supporters throw stones
(photo credit: AP)
Advertisement
Hamas representatives who visited Cairo in November and December for talks on a possible prisoner exchange agreement with Israel and reconciliation with the rival Fatah faction asked government officials about the nature of the construction work that had been taking place for several weeks along the border between the Gaza Strip and Sinai.The Egyptians, according to one of the Hamas representatives, sought to allay the group's concerns by assuring them that this was only routine "engineering" work.Hamas's suspicions regarding Egypt's true intentions grew when Palestinians living on the Egyptian side of the border were told by some of the laborers employed in the project that it was actually aimed at building an underground steel wall."The workers said that Egyptian security officers had warned them against talking to anyone about the project," said a Hamas legislator in the Gaza Strip. "The Egyptian authorities were evidently concerned about how the wall would be perceived in the Arab and Islamic world and that's why they wanted to build it without drawing attention." 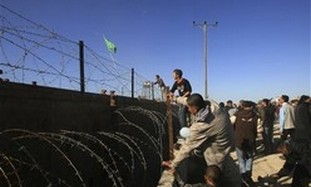 Seeking to embarrass the Egyptians and exert pressure on them to halt the construction of the barrier, Hamas has in the past three weeks managed to mobilize major media outlets in the Arab and Islamic world against the project.Hamas began organizing tours for local and foreign journalists and photographers to the Palestinian side of the border so that they could see with their own eyes the "engineering" work. Al-Jazeera, the Arab world's most popular TV network, which has long been extraordinarily sympathetic toward Hamas, took upon itself the mission of depicting the Egyptians as being part of a US-Israeli conspiracy to "strangle" the Palestinians in the Gaza Strip.Al-Jazeera has since dedicated many of its popular programs to live debates about the controversial wall, providing a free platform to almost anyone willing to condemn the Egyptian regime and President Hosni Mubarak. The controversy over the wall has even divided the most prominent scholars of the Islamic world, triggering a "war of fatwas" in favor of and against the project.Hamas officials are convinced that Mubarak decided to build the wall not only under pressure from the US and Israel, but also to punish the movement for its negative position on the issues of reconciliation with Fatah and the case of IDF soldier St.-Sgt. Gilad Schalit. They also insist there is no justification for the building of the steel wall, because Hamas has never posed a threat to Egypt's national security."When Egypt talks about a threat to its so-called national security, it's actually talking about a threat to its regime," argued Prof. Abdul Sattar Kassem, a West Bank academic and Hamas supporter. "Egypt anyway has limited self-rule in Sinai because of the Camp David Accords, which prevent the Egyptians from having a large military presence there."He and other pro-Hamas spokesmen categorically dismiss claims that the Egyptians are worried that Hamas would smuggle weapons into Egypt with the purpose of undermining the regime."It's true that we don't like Mubarak's regime, but we are not trying to occupy Cairo," said a Hamas legislator in the Gaza Strip. "Our conflict is with the Israeli enemy, not Egypt or any other Arab country."According to the legislator and several other Hamas spokesmen, the Egyptians are seeking to "punish" Hamas for its refusal to sign an Egyptian-brokered reconciliation accord with Fatah in Cairo last October.Hamas cancelled its participation in the signing ceremony at the last minute to protest Palestinian Authority President Mahmoud Abbas's decision not to back a resolution in the UN Human Rights Council that would have condemned Israel for allegedly perpetrating "war crimes" during Operation Cast Lead in the Gaza Strip.The Hamas boycott is said to have enraged Mubarak, who was hoping to score points among Arabs and Muslims for succeeding where the Saudis, Yemenis and other Arabs had failed, namely in ending the power struggle between Hamas and Fatah.RELATIONS BETWEEN Cairo and Hamas had already been strained over the case of Schalit. For the past three years the Egyptians have been trying, thus far unsuccessfully, to negotiate a deal between Hamas and Israel to release the soldier in return for several hundred Palestinians held in Israeli jails.Late last year Hamas decided to substitute the Egyptians with a senior German diplomat, who is now acting as the main mediator. The Hamas decision to dump the Egyptians in favor of the German is also said to have angered Mubarak and his General Intelligence chief, Omar Suleiman, who was personally involved in attempts to persuade Israel and Hamas to agree to a prisoner swap.A Hamas-Fatah reconciliation accord and a Hamas-Israel prisoner exchange deal would have bolstered the standing of Mubarak's regime in the local, regional and international arenas. Mubarak was hoping to reestablish Egypt's role as the Arab world's most influential country, but Hamas has clearly destroyed his dream.The anti-wall campaign in the Arab media, as well as Palestinian demonstrations against what has become known on as the "wall of shame," has caused severe damage to the Egyptian regime's reputation throughout Arab and Islamic countries, where Mubarak is being dubbed a pawn in the hands of the US and Israel. This, of course, does not help his dream of having his son, Gamal, succeed him as president.The new steel wall has put Egypt on a collision course with Hamas, whose supporters are now promising to escalate their campaign to stop the "engineering" work along the border. Palestinians in the Gaza Strip said this week that increased pressure on Hamas could force the movement to make every possible effort to tear down the underground barrier, including the use of explosives.With increasing tensions and skirmishes along the border, Egypt could one day be forced to launch its own Operation Cast Lead.