Grapevine: A little piece of Boston

By GREER FAY CASHMAN
Deval Patrick with Eliezer Shkedi 311
(photo credit: Sivan Farag)
Advertisement
FOR ISRAELIS, rain is a blessing, but Steve Leibowitz, president of the Israel Football League, would have preferred the rain to hold off for a little while when he had 70 VIP guests from Boston, including Massachusetts Governor Deval Patrick and Robert Kraft, owner of the New England Patriots and benefactor of the Kraft Stadium in Jerusalem. The special guests included two Massachusetts delegations, one from the Boston Jewish federation and the other of senior government, business and education leaders who accompanied Patrick.Kraft, who is being followed around by a CBS television crew which is preparing a segment on him for its long-running documentary 60 Minutes and for ESPN Showtime, was present in multiple capacities, and neither he nor any of the other Bostonians seemed to mind the rain as they stood under umbrellas watching a game of tackle football being played by the Leyad Ha’universita team from Jerusalem and a team from Kfar Saba. Also present were a number of American expats from Boston. When Leibowitz asked them if they were Patriots fans, he got a roar of assent.Kraft, speaking in Hebrew and English, said how happy it made him, when coming to the Kraft stadium, to hear both “The Star Spangled Banner” and “Hatikva.” It always brought tears to his eyes, he said. Leibowitz presented football jerseys to both Patrick and Kraft.Patrick’s had the number 71, because he is the 71st governor of Massachusetts, and Kraft’s had the number 18 for obvious Jewish reasons.Patrick said that although he couldn’t speak Hebrew as well as Kraft, he was glad to hear that the word football was the same in both languages. More than that, he was proud that a little piece of Boston – Kraft Stadium – was located in Jerusalem.Kraft threw the ball that started the game in the direction of Kfar Saba coach Itay Ashkenazi who also plays quarterback. If the name sounds familiar, it’s not by coincidence. His dad is Gabi Ashkenazi, who up until the middle of last month was chief of the General  Staff. 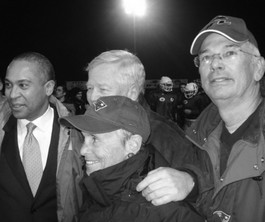