Visiting Canadian Prime Minister Stephen Harper takes to the stage to dazzle the audience with his rendition of the Beatles "Hey Jude."

On the eve of his last full day in Israel, Canadian Prime Minister Stephen Harper took to the stage at the state dinner at the David Citadel Hotel in Jerusalem on Tuesday evening to show off his singing talents and his love for the Beatles.

Harper courageously performed "Hey Jude" in front of the audience, with Prime Minister Binyamin Netanyahu and his wife Sara gleefully sitting near the stage humming along.

Harper, along with his wife, Laureen, arrived Sunday for a four-day visit at the head of a massive 250-person delegation that includes six ministers and six parliament members. 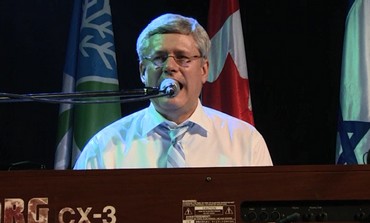 In addition to visiting the Palestinian Authority on Monday, Harper will also – after he leaves Israel Wednesday afternoon – travel to Jordan for meetings there as part of what his office is billing as Harper's "first trip to the Middle East."

Harper has been in office since 2006.