The Numbers Crunch: Gingrich on the rise

JPost readers want Gingrich for president, Washington-Tehran relations take 3% of the US news.

By ELANA KIRSH
Numbers Crunch 311
(photo credit: Mrkay Design)
Advertisement
Republican presidential hopeful Newt Gingrich made serious noise online this past week, on both mainstream and social media. Jerusalem Post readers were specifically interested in his comments on Palestinians, and they garnered significant interest and coverage in the US.The Pew Research Center dubbed Gingrich the top newsmaker of the week, featuring in almost half (47 percent) of news stories relating to the 2012 election campaign. Across the board, he was a dominant figure in 10% of stories studied. The PRC’s News Coverage Index found that the elections were the topic of the week, accounting for 24% of the newshole.Possibly as a result of the spike in coverage, JPost readers indicated resounding support for the GOP front-runner in a quick vote earlier this week, with almost half of respondents naming him their top choice for Israel. The only other candidates who managed to pull more than 5% of the vote were US President Barack Obama (9.83%) and Mitt Romney (11.56%). 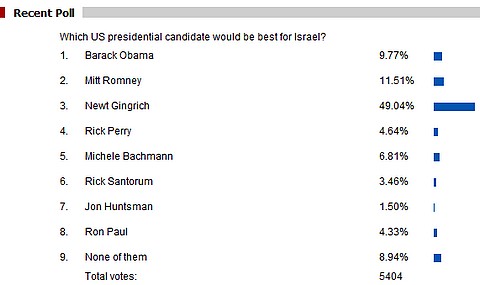 US presidential candidate poll resultsIn other news, Washington-Tehran accounted for 3% of US coverage in the past week, according to the PRC. The spike in interest came after a US drone fell into Iranian hands, sparking a flood of reactions from both sides. The story was the fourth-most interesting to US readers, according to the News Coverage Index.It seems JPost readers were far more interested in the Iran story than in US elections, by a quick look at the Top Five list. Four of the top five stories related to Iran, three of them directly to the drones story.JPost Top Five most-read stories:1. US army: Iran is in possession of our spy drone
2. Iran state TV shows pictures of downed US drone
3. Our World: An ally no more
4. Eight killed in mysterious blast at Iranian steel plant
5. 'Technical problems, not Iran, downed drone'On the talkback forums, however, Gingrich stories attracted far more attention, with two news stories and a column on his comments making it to the list. Diplomatic and security stories, as usual, sat at the top of the list.JPost Top Five most-active threads:1. Israeli call to resume direct talks rebuffed by PA
2. IDF says 10 rockets fired at southern Israel from Gaza
3. Rivals slam Gingrich over Palestinian comments
4. Gingrich calls Palestinians an 'invented' people
5. Our World: Gingrich’s fresh hopeOn social media, meanwhile, Egyptians were still flooding Twitter with tweets, as votes were cast in the second round of parliamentary elections on Wednesday and Thursday. The trend was the most popular across the Middle East, as seen on Trendsmap.

Trendsmap.com screenshotNext week on the Crunch, the New Year’s countdown begins, starting with a collection of Top 11s of 2011.From news sites to blogs, tweets to videos, The Numbers Crunch is a weekly column which zooms out and brings you the big picture online, from Israel, the Middle East and around the world, and poll results from JPost.com.The writer is the Internet desk manager at The Jerusalem Post.
Advertisement
Subscribe for our daily newsletter