By elana kirsh
DECEMBER 30, 2011 13:07
Numbers Crunch 311
(photo credit: Mrkay Design)
Advertisement
Although much of the world shut down for Christmas-New Years, it was business as usual in Israel this week, with the majority of local new coverage focused on domestic matters. Simmering tensions between varied elements of the religious spectrum in Israel bubbled to the surface, sparked by multiple reported incidents of haredi (ultra-Orthodox) violence against women. A rally against such extremism brought thousands together in Beit Shemesh on Tuesday, and made the top Jerusalem Post story of the week.JPost Top Five most-read stories1. Thousands protest ultra-Orthodox extremism
2. Sudanese media report on Israeli air strikes
3. Gingrich condemns Ron Paul for abandoning Israel
4. IDF strikes two Gaza targets, at least three dead
5. Bunker buster bombs from US may be defectiveDespite the parallel of the top Post story with the biggest Israeli news story of the week, the rest of the Top Five spanned various topics, from violence in the South to reports in Sudan and more on the US presidential campaign. Likewise on the talkback forums, readers jumped from the Iranian threat to the peace process to Israel’s settlement policy, without a clear joining thread.JPost Top Five most-active threads: 1. Gingrich condemns Ron Paul for abandoning Israel
2. ‘US, Israel discuss ‘triggers’ for Iran attack’
3. Thousands protest ultra-Orthodox extremism
4. PA negotiator: We may withdraw recognition of Israel
5. Security Council members line up to criticize IsraelOver 3,000 JPost readers cast their votes on the issue of religious extremism in Israel, in a recent poll. Over 70 percent of respondents opined that the spread of extreme ultra-Orthodox ideology endangers Israeli democracy, and that leaders must take a hard stance against it. Less than 10% disagreed, saying that such extremism does not threaten democracy, and that haredim are an integrated part of Israeli society.

In the US, meanwhile, foreign stories dominated much of news coverage throughout 2011, according to the annual overview released by the Pew Research Center this week. The PRC found that the Japanese earthquake and nuclear scare in March was the most interesting story, with 55% of Americans following the story “very closely.” Similarly, the killing of Osama bin Laden in May was followed by 50% of those surveyed. The story of the US Navy SEAL raid which resulted in bin Laden’s death filled 69% of the newshole on the week it broke, making it the biggest one-week story of the year, according to the PRC report.

Despite the media storm which accompanied the Arab Spring throughout the year, individual Middle East issues were relatively low on the PRC’s list, but combined they accounted for 12% of news coverage. The report noted that the Middle East uprisings were “the second-biggest annual foreign story on record since the Project for Excellence in Journalism began analyzing the news agenda five years earlier. The only bigger international story was Iraq in 2007, the year of the "surge" under president George W. Bush.Interestingly, the biggest component of the story was Libya, taking into account international military intervention, the search for Muammar Gaddafi, and his subsequent capture and killing. The fall of Egypt's Hosni Mubarak and the ongoing violence in Syria came in second and third, respectively.The Israel-Palestinian conflict took a back seat in US news coverage in 2011, despite Palestinian efforts for statehood at the United Nations in September and efforts to restart peace talks throughout the year. Only 1% of news coverage was devoted to the issue, and likewise for news on Iran.

The 2012 presidential campaign took 9% of the news hole, ranking as the third biggest news topic in the US for 2011.Moving from traditional to social media, figures from the past year revealed significant differences in how users of different platforms interact with the news. Twitter users, for example, showed more interest in technology, whereas bloggers forged what the PRC called “a hybrid news agenda that shares elements with both Twitter and the mainstream media.” 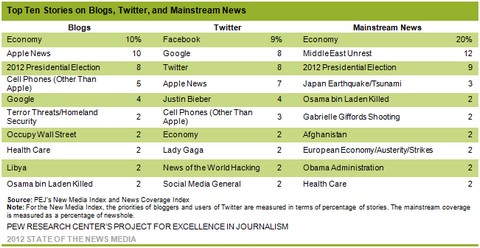 The report highlighted that five of the top 10 blog stories of the year paralleled stories covered by mainstream news media.On the topic of social media, meanwhile, JPost.com’s Twitter feed recently passed 40,000 followers. The feed posts a combination of links to articles and videos, and retweets from Jerusalem Post reporters.And in Egypt, tweets coming from the protest center of Cairo's Tahrir Square seemed to have died down after dominating the region for several weeks. Tweets coming out of Jordan, Israel and Syria were of a similar volume to those out of Egypt, according to Trendsmap. 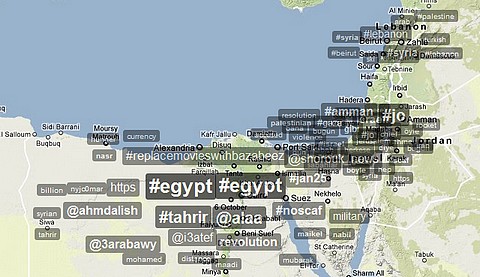 Last up, statistics from a recent study on global cellphone usage, in 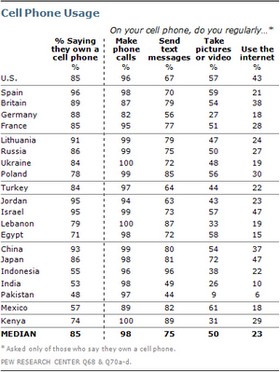 which Israel stood out boldly in the region.• Globally, 75% of cellphone owners regularly text, 50% take pictures and video, and 23% use the Internet.
• In Israel, 73% text, 57% take pictures and video, and 47% use the Internet.
• Israel was one of only six countries, along with Japan, the US, Britain, China and Poland, in which over 30% of cellphone owners use the devices to access the Internet.
• 53% of Israelis use social networking sites, putting the country at the top of the usage list.
From news sites to blogs, tweets to videos, The Numbers Crunch is a weekly column which zooms out and brings you the big picture online, from Israel, the Middle East and around the world, and poll results from JPost.com.The writer is the Internet desk manager at The Jerusalem Post.
Advertisement
Subscribe for our daily newsletter