The Numbers Crunch: #j14 back in Tel Aviv

By elana kirsh
JUNE 29, 2012 09:30
Numbers Crunch 311
(photo credit: Mrkay Design)
Advertisement
Tel Aviv was heating up both literally and figuratively this week, with dozens of demonstrators detained in a heated protest and the social protest movement’s hashtag #j14 spiking at over 5,000 Twitter mentions in a single day. The hashtag was the top term in Tel Aviv, according to mapping site Trendsmap, and followed a heated demonstration on Saturday night and further protests planned to coincide with Tel Aviv’s White Night events. 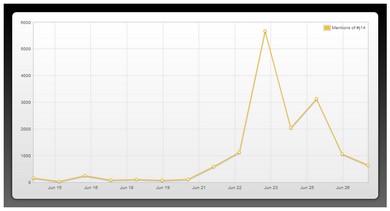 Topsy LabsDespite the movement’s resurfacing and the question of whether this summer will bring the return of the tent cities that covered the country last year, Jerusalem Post readers showed more interest in diplomatic- and security-related stories, and pieces from the Jewish World. This week’s list was topped by reactions to renewed violence in and around the Gaza Strip, followed by the story of a gay Holocaust survivor which went viral on social media, particularly on Facebook, where it was shared over 4,000 times.JPost Top Five most-read stories:
1. IDF: Quiet, violence to be met in kind
2. Last gay Jewish Holocaust survivor dies
3. Former Hamas man to ‘tell truth’ about Muhammad
4. Report: 'Senior Syria regime figures trying to defect'
5. Female soldier harassed by haredim becomes modelOn the talkback forums, readers commented on similar topics, though there were no stories common to both lists. Reports stirring up conversation also spanned diplomatic and security issues, religious tensions in Israel, and an exclusive interview with veteran Labor politician Binyamin Ben-Eliezer.JPost Top Five most-active threads:
1. Author won't let Israeli publishing house print book
2. Turkey vows response after Syria downs warplane
3. Hamas: We'll stop rockets if Israel ends aggression
4. Woman detained at Kotel for wearing tallit
5. Ben-Eliezer: 'Israel has no choice but to talk to Muslim Brotherhood'While the regional news of newly elected Egyptian President Mohammed Mursi’s victory hardly figured in the stories of the week, JPost readers remained pessimistic. In a quick vote taken this week, over 40 percent of some 2,000 respondents voiced their belief that Israel will have to increase its presence along the southern border as a result of the Muslim Brotherhood candidate’s victory, and a further 33% believe the result will spell the end of the peace treaty and lead to war.

The news from Egypt also made waves on the Post’s social media channels, with an analysis by military reporter Yaakov Katz on the results topping the list of most-viral posts on our new Facebook page.To wrap up this week, some statistics for readers tuning in from mobile devices, from the Pew Research Center:• Just over half of cellphone owners in the US (53%) have a smartphone.
• 17% of cellphone owners in the US do most of their online browsing on their phone.
• The 25-34 age group is the fastest growing group to start using cellphones to go online.
• One in 10 cellphone users surveyed say their phone is the only access they have to the Internet.From news sites to blogs, tweets to videos, The Numbers Crunch is a weekly column which zooms out and brings you the big picture online, from Israel, the Middle East and around the world, and poll results from JPost.com.
The writer is the Internet desk manager at The Jerusalem Post.
Advertisement
Subscribe for our daily newsletter