Come to the Table: How to be a Balaboosta

Translated as 'woman of the house' or 'housewife' and originally meant as an honorific, the term implies to some being a slave to family demands.

By GAYLE SQUIRES
DO NOT USE
(photo credit: Quentin Bacon)
Advertisement
Einat Admony calls herself a balaboosta. Translated from Yiddish as 'woman of the house' or 'housewife' and originally meant as an honorific, the term implies to some being a slave to family demands, valued only for domesticity. Eschewing these negative connotations, this Israeli chef-owner of Taim and Balaboosta restaurants in New York City chooses to embrace the label. Admony writes in her cookbook Balaboosta: Bold Mediterranean Recipes to Feed the People You Love that the term balaboosta was “reserved for the most energetic of women who tirelessly cooked and cleaned while taking charge of the spiritual and emotional well-being of their husbands and kids. A balaboosta made sure her table was crowded not just with food but also with laughter.” For Admony, being a balaboosta is a way of life both personally and professionally. Case in point: after long days running her businesses and kitchens, she manages to bake challah on Fridays with her two young children, invite friends over for dinner several times a week, and steal away with her husband for a few moments over cocktails. And the vibe of her restaurants, from the food to the atmosphere to the service, makes you feel like you’re part of her extended family. Balaboosta the cookbook is organized to reflect this generous lifestyle with sections such as casual parties, family dinner, comfort foods, and restaurant favorites. No matter which of these situations you’re in, it’s easy to find the right recipes to show you care. Admony shares an eclectic mix of foods. With a Persian mother and a Yemenite father, she naturally leans towards Sephardic flavors and provides recipes for harissa, s’chug, preserved lemons, and other fiery building blocks of these cuisines. Having grown up in a religious household (one of her first kitchen jobs was inspecting lettuce for tiny bugs on Friday afternoons under her mother’s careful watch), Admony appreciates traditional dishes like hamin (the Sephardic equivalent to Shabbat chulent) and Hanukkah jam-filled sufganiyot doughnuts. Her travels have also influenced her cooking and many of her recipes benefit from the unexpected twists that make her restaurants so successful: beets flavor pink-hued gnocchi, smokey chorizo intensifies chicken soup. Though the cookbook isn’t kosher, over 90% of the recipes can be made in an observant home without modification. Admony’s infectious personality permeates the book with stories that range from funny to intimate to heartwarming and head-notes that make you want to cook alongside her. And while the photographs alone could entice you into the kitchen, it’s Admony’s instruction, encouragement, and laughter that guide you to gather your spices, your pots and pans, and most importantly, your loved ones. Sweet Potato Wedges with Rosemary and Mustard Seeds
Serves 4 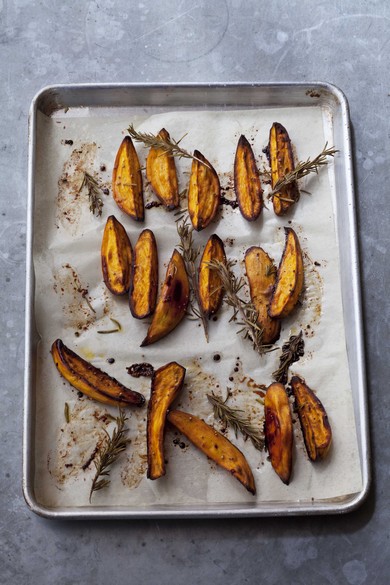 Sweet potato wedges are the perfect side to steak, and they’re a nice (and healthy!) change from the usual mashed potatoes or fries. The mustard seeds give these crunch, the honey a dab of sweetness. They almost taste like you’re eating candy.3 tablespoons olive oil
2 tablespoons honey
2 teaspoons mustard seeds
1 ½ teaspoons kosher salt
Pinch of freshly ground black pepper
1 fresh rosemary sprig
1 ½ pounds red-skinned sweet potatoes or yams, peeled1. Preheat the oven to 375°F.2. Whisk together the oil, honey, mustard seeds, salt, and pepper in a large bowl. Pick the leaves from the sprig of rosemary and add them to the honey mixture.3. Cut the sweet potatoes into 1-inch-thick wedges and toss them in the bowl. Mix well to coat the sweet potatoes evenly.4. Line a baking sheet with parchment paper and place the sweet potato wedges side by side in a single layer. Use a rubber spatula to scrape any remaining mixture from the bowl and drizzle it on top of the sweet potatoes.5. Bake the sweet potatoes until tender, about 1 hour, flipping them during the last 15 minutes of cooking.Zucchini Patties
Serves 4 to 6 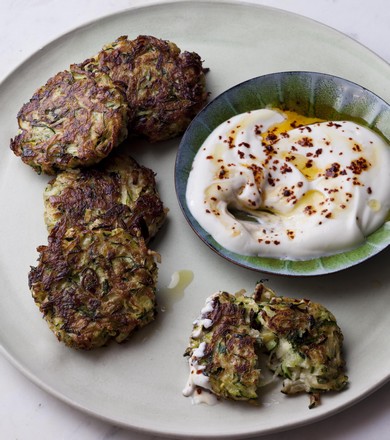 This dish is so incredibly simple to make, but the results are exquisite. Serve with plain yogurt or, better, with the same Wild West Dressing you made for the kids (page 59). In a pinch, bread crumbs from store-bought challah are fine too.3 medium zucchini
1 medium yellow onion
1 leek, white and light green parts only, finely chopped
2 ½ tablespoons finely chopped fresh dill
⅓ cup crumbs made from challah (page 24)
1 large egg, beaten
Canola oil
Kosher salt1. Finely grate the zucchini and onion. Wrap the grated vegetables in a clean dish towel and twist both ends over the kitchen sink to squeeze out all the excess moisture.2. Combine the zucchini, onion, leek, dill, and bread crumbs in a large bowl. Add the egg and use your hands to mix everything together. Shape the mixture into 2-inch patties.3. Add ½ inch of oil to a large skillet and heat over medium heat. Cook the zucchini patties in the hot oil until both sides are golden brown, 3 to 5 minutes. Drain on paper towels and season with salt.Excerpted from Balaboosta by Einat Admony (Artisan Books). Copyright © 2013. Photographs by Quentin Bacon.

Gayle Squires publishes recipes and photographs on the blog, Kosher Camembert. Her cooking and baking is inspired by international travel .
Advertisement
Subscribe for our daily newsletter