Come to the Table: Salad days of winter

For the next few weeks, follow this basic formula for winter salads and don't let the best of the season pass you by.

Arugula salad with pear, goat cheese, pomegranate, walnuts
(photo credit: Gayle Squires)
Advertisement
As February rolls around and Punxsutawney Phil predicts mild months ahead, cravings for spring and summer produce sneak up on us. But before jumping into warm weather salads - a celebration of a ripe vegetable or two and a few delicate greens adorned with just a splash of olive oil and lemon juice - savor the lingering vestiges of winter. Though winter salads take a little extra planning and some imagination to coax out the flavors of hardier greens and root vegetables, their complexity might leave you longing for them as the first few buds push their way through the melting snow and the farmers markets reopen.While there's no rule that salad must contain greens, most do. Case in point, Shakespeare's Cleopatra inextricably linked salads with the color green, reflecting on her youthful "... salad days, / When I was green in judgment, cold in blood." Winter leaves tend to be more bitter and thicker than their summer counterparts. On first blush, this probably doesn't sound like much of an endorsement. But winter salads were made for dressing, which, etymologically speaking, may indicate that they are closer to the origins of salad than their summer brethren. The word salad is derived from the Latin sal (salt) and refers to the salty pickling brine that dressed Roman greens. Peppery arugula, radicchio (purple, but still in the greens category) and mustard greens can stand up to a more assertive dressing with extra acid, and a little sugar can tame the piquant spice. Give anything that you're used to seeing cooked - kale, collards, cabbage -  a little extra time to soak up the dressing in order to soften and wilt the greens. If you want to keep things basic, squeeze a lemon over the greens, and then let a fried egg do the work, its creamy yolk coating the leaves.Winter vegetables are transformed by roasting, which brings out their natural sweetness. Crank the oven above 200°C (400°F) and throw in the vegetables, doused in the holy roasting trinity of olive oil, salt, and pepper and spread out on foil-covered cookie sheets. The trees - stalks of broccoli and cauliflower - take fifteen to twenty minutes. Most roots - chopped carrots, parsnips, squash, and potatoes - should roast for thirty to forty-five minutes. And tightly-wrapped parcels of beets need up to ninety minutes, depending on their size, until a sharp knife or toothpick can pierce the flesh easily. Don't be daunted by the extra preparation time; instead, uncork some wine and pop in a movie while you roast loads of vegetables at the same time. Then keep them in the refrigerator for three to four days, grabbing one or two for salad or to mix with pasta or to serve just as they are alongside a steak.Cold weather salads benefit from contrast. Bright colors excite the eye and prepare the palate: think fuchsia beets and golden squash atop dark green leaves. Add unexpected texture from beans, lentils, or chewy grains such as wild rice, farro, or barley. Check out Cook’s Illustrated's recently published “beyond rice” guide for helpful hints on preparing grains that you may be less familiar with. For a burst of juice, top with pieces of apple or pear, sections of grapefruit, or pomegranate seeds. Shave or crumble some cheese, such as Parmesan or feta, for added richness. And then, what truly elevates any salad is something crunchy: Toast some nuts or seeds in the oven (a toaster oven works great here too) or in a pan. And that stale bread? Chop it into cubes or grind it into coarse crumbs, season, and brown in the oven.Before you know it, you'll be greeted by those first fiddleheads ferns and morels in the US, white asparagus and artichokes in northern and southern Europe. But for the next few weeks, follow this basic formula for winter salads and don't let the best of the season pass you by.Bitter greens with pink grapefruit and sumac This salad is adapted from a Yotam Ottolenghi recipe published earlier this year in The Guardian. You’ll probably have leftover dressing that you can store in the refrigerator. 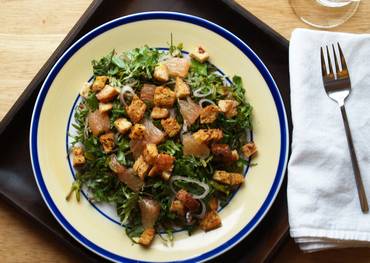 Serves four
- 1/3 stale baguette or 3 slices of stale bread
- 5 T olive oil, divided
- 1 T sumac, divided
- ¾ C grapefruit juice (I used juice from a carton)
- 2 T sugar
- 1 t harissa
- 1 lemon for 2 T juice
- 3 pink or red grapefruits
- 1 shallot
- 4 large handfuls of bitter greens (here I used a mix of tender mizuna and arugula; kale, endive, radicchio would also work well)
- salt Toast. Cut the stale bread into bite-sized cubes (approximately 1 cup). Toss with 1 tablespoon of oil, 1 teaspoon of sumac, and a pinch of salt and grind of pepper to taste. Spread in a single layer on a cookie sheet and toast in a 150°C (300°F) oven until golden, about 10 minutes. Simmer. Mix the grapefruit juice, sugar, and harissa in a small saucepan and bring to a boil. Lower the heat and simmer until the sauce thickens and you have about 4 tablespoons-worth of juice left; this could take up to 20 minutes. Set aside to cool down, then whisk in the remaining four tablespoons of oil, lemon juice, remaining two teaspoons of sumac and a quarter-teaspoon of salt. Dip a leaf into the dressing and adjust the seasoning.Peel. Peel the grapefruits and separate each segment like you would with an orange. Separate the flesh from the membranes and break into a few pieces. Cut. Slice the shallot into very thin rounds. Roughly chop the greens into bite-sized pieces
Assemble. In a large bowl, mix the grapefruit segments, shallot, and greens. Pour over ¼ cup of dressing and toss gently. Add more dressing to taste. Sprinkle with croutons and serve right before serving.Kale and barley salad with beetsThis recipe is based on a salad recently featured in Bon Appétit. It would be great with feta, as the original indicates. I typically make a large batch of barley (or other grains) and freeze the leftovers, one cup per bag, and then pull out what I need for a quick dinner. 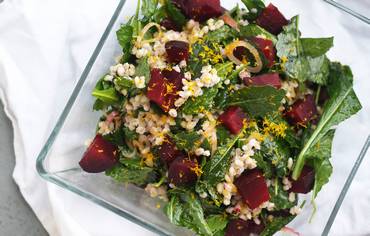 Serves 4
- 2 medium beets
- 5 T olive oil, divided
- 3/4 C uncooked barley
- 2 T unseasoned rice vinegar
- 2 t light brown sugar
- 1 orange for zest
- 1 shallot
- 1 big bunch of Tuscan kale (also called lacinato or dinosaur kale) or 5 oz (4 big handfuls) baby kale
- salt and pepperPreheat oven to 220°C (425°F.)Roast.  Wash and dry the beets, place on a large square of aluminum foil, and drizzle with oil. Wrap up the beets really well and roast for 45 minutes to 1 hour 15 minutes. The beets are done when a sharp knife can easily pierce through to the center without hitting much resistance. Take them out of the oven, making sure that they foil is still tightly covering the beets. Let them cool covered before handling them. When they are cool, use a peeler, a paring knife, or your fingers to peel off the skin. I like to wear disposable gloves so that my fingers don’t get stained pink. Cut the beets into 1/2-inch cubes.Simmer. Bring a large pot of water to a boil (at least 3 cups). Salt the boiling water and then add the barley. Stir once and then reduce the heat to a medium simmer (there should be a few bubbles every second, but you don’t want a full on violently roll). Cook for 45 minutes to an hour. The barley is ready when it is al dente – just barely tender. If the barley feels like it has a little hard grain inside, it’s not quite ready yet. (If your barley comes with different directions, it’s probably best to follow them.)Dry. Drain the barley and spread it onto a cookie sheet to dry out and cool.Shake. In a glass jar, shake together the remaining ¼ cup of olive oil, vinegar, sugar, and orange zest (put aside a pinch or two of zest to sprinkle on the assembled salad). Very thinly slice shallots into rings, and add them to the jar and keep shaking. Dip a kale leaf into the dressing and adjust the seasoning, adding salt and pepper to taste. 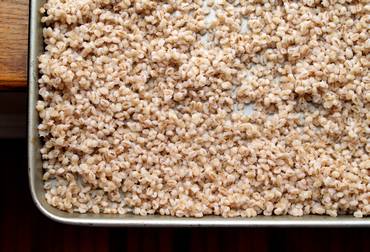 Wilt.  If you’re using Tuscan kale, separate leaves from ribs and cut the leaves into bite-sized pieces. If you’re using the baby kale, rough chop the leaves, also into bite-sized-pieces. Add half the dressing (including some of the shallots), and massage it into the kale. Let sit for three hours until the leaves start to wilt and become tender.Assemble. Gently toss the wilted kale with the barley and another tablespoon of dressing, or to taste. Top with beets and the reserved orange zest.Arugula salad with pear, goat cheese, pomegranate, and walnutsServes 4
- 1/3 C walnuts
- 6 T olive oil
- 1 T pomegranate molasses
- 1 T lemon juice
- 2 t brown sugar
- 3-4 large handfuls of arugula
- 10 sprigs of parsley
- 1 scallion
- 1 pear (I used Bosc)
- ½ pomegranate for ½ C seeds
- 2 T goat cheese
- salt and pepper 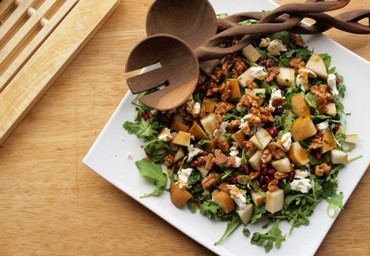 Toast. Spread the walnuts in a single layer on a cookie sheet and toast in a 200°C (300°F) oven until fragrant, about 10 minutes. Shake. Put olive oil, pomegranate molasses, lemon juice, and sugar in a jar and shake to mix. Add salt and pepper to taste. Dip an arugula leaf into the dressing and adjust the seasoning.Cut. Rough chop the arugula into bite-sized pieces. Mince the parsley. Slice the scallion on a bias. Cut the pear into ½-inch cubes. Tap. To remove the seeds from the pomegranate, slice the fruit in half, hold a piece cut side down over a large bowl, and hit the outside skin with a wooden spoon. Most of the seeds will fall out and you can gently pry out any remaining ones. Juice will splatter, so don’t wear white.Assemble.  Mix together the arugula and parsley and arrange on a large plate. Scatter the scallion, pear, pomegranate seeds, and walnuts over the greens. Crumble the goat cheese. Drizzle with a few tablespoons of dressing. The dressing is intense, so drizzle sparingly.Gayle Squires publishes recipes and photographs on the blog, Kosher Camembert. Her cooking and baking is inspired by international travel .Follow @JPost_Lifestyle
Advertisement
Subscribe for our daily newsletter