Try these foolproof recipes for doughnuts from around the world, including Moroccan sfinge, baked American doughnuts and Italian panzerotti.

By NERIA BARR
Sfinge
(photo credit: Dan Peretz)
Advertisement
Doughnuts abound everywhere; we decided to try a few versions at home.True, they are not as impressive as those found in the best bakeries – not filled with Belgian chocolate mousse or topped with exotic crust – but they taste fabulous and can be prepared at home for our guests.
MOROCCAN SFINGECourtesy of Sahar Raphael from Kramim and Kadita restaurants✔ 1 kg. cake flour
✔ 1 egg
✔ ½ cup oil
✔ 50 gr. yeast
✔ 1 tsp. salt
✔ 1 cup sugar
✔ 800 ml. lukewarm waterMix yeast and flour in a large bowl. Add sugar and salt and mix. Begin by adding half the water and kneading by lifting the dough and turning for about 1 minute.Gradually add the rest of the water and continue kneading 1 minute more. Cover the bowl and let rise until double in size.Knead again and let rise for the second time until double in size.Heat oil. Grease your palms and pinch a small ball of dough with one hand while cutting it from the rest of the dough with the fingers of the other hand. Make a hole in the ball using your finger and stretch the dough. Quickly place the stretched ring in the boiling-hot oil. Continue with the rest of the dough, working quickly. Oil your palms from time to time. Fry each sfinge about 2 minutes on each side until golden.Transfer them to a paper towel.Spread sugar on a plate and dip the still hot sfinge in the sugar until coated. Serve warm.
YOGURT-FILLED DOUGHNUTS
Makes about 30 small doughnutsThe following recipe was given to us by chef Barak Hai Horesh, courtesy of Müller Yogurt.✔ 1 kg. flour mixed with yeast
✔ 1⁄5 cup sugar
✔ 2 eggs
✔ 200 gr. butter, soft
✔ Pinch salt
✔ 2 cups natural yogurt (400 gr. – we suggest the Müller 1.7% fat or the 2.8% fat
✔ 1 Tbsp. brandy
✔ Oil For the filling
✔ Fruit yogurt
✔ Coconut flakes for garnish (optional) In a mixer bowl, knead together flour and sugar. Add eggs, butter and salt and knead.Add yogurt and brandy and continue kneading until a sticky but smooth dough forms.Leave the dough in the bowl covered with a kitchen towel until double in size (about 1 hour). Transfer to a lightly floured work surface and roll until 1 centimeter thick. Using a glass or cookie cutter, cut rounds. Arrange the rounds on a lined baking sheet and leave to rise until doublein size and ball shaped.Heat oil in a large pot to 180 and fry doughnuts until golden brown. Let cool briefly on a paper towel and inject the filling using a pastry syringe. Garnish with coconut flakes or powdered sugar.Note: The doughnuts are great with or without filling.
ITALIAN PANZEROTTI 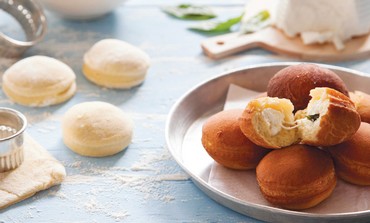 Panzerotti (Dan Lev)Chef Mena Strum specializes in Italian cuisine. His version of the holiday delights is a take on the traditional Neapolitan panzerotti he created for Gad Dairies. The original dish is served filled with savory cheese and any additions one likes, such as tomatoes, green peas or fresh herbs.

For the dough
✔ 4 cups flour
✔ 4 eggs
✔ 4 or 5 tsp. salt
✔ 6 tsp. sugar
✔ 75 gr. butter
✔ 100 gr. potato puree (about 1 large potato, peeled, cooked and mashed)
✔ 20 gr. dry yeastMix ingredients together and let rise for three hours. It is good to cover and refrigerate the dough overnight.When the dough has tripled in size, knead and roll out until about ½ cm thick. Divide the dough in two. Mark rounds in one half using a glass or cookie cutter. Place a little filling in the middle of each round. Cover with the rest of the dough and, using the glass or cookie cutter, cut the filled rounds.The recipe can be prepared up to this point ahead of time.Just before serving, heat oil in a deep pot and fry the panzerotti until golden brown.If serving sweet panzerotti, garnish with powdered sugar.Fillings
Any cheese fillings, either savory or sweet, go well with panzerotti, as do other fillings.Here are two options.Savory cheese mix
✔ 200 gr. ricotta cheese
✔ 100 gr. grated mozzarella cheese
✔ 20 gr. Parmesan cheese
✔ 2 egg yolks
✔ A few leaves of fresh basil, chopped Mix together and fill.Sweet cheese and fruit filling
✔ 1 cup ricotta cheese
✔ 4 Tbsp. fruit jam (blueberry or cherry) Mix together and fill.
BANANA DOUGHNUTS
Courtesy of The White Chef, Tnuva.
Makes 15-20 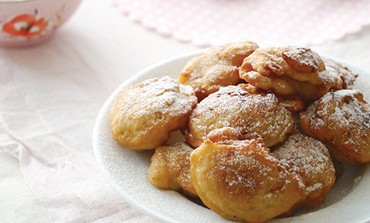 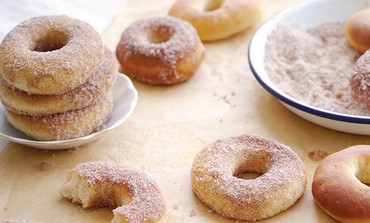 Baked American-style (Naomi Abliovitz)This recipe, courtesy of Tnuva’s The White Chef, is for traditional round doughnuts with a hole; but unlike the beloved oily ones, these are baked and are fantastic for a holiday breakfast.✔ 2⁄3 cup lukewarm milk
✔ 25 gr. fresh yeast
✔ 10 gr. butter, melted
✔ ⅓ cup sugar
✔ 1 egg
✔ 2½ cups flour
✔ Pinch nutmeg
✔ Pinch salt For coating
✔ 40 gr. butter, melted
✔ 3⁄4 cup sugar
✔ ½ Tbsp. cinnamon In a large bowl, dissolve yeast in 3 Tbsp.milk. Set aside.In a separate bowl, mix together the rest of the milk, butter and sugar. Add to the yeast mixture. Add egg, flour, nutmeg and salt and, using a fork, mix only until smooth.Transfer to a mixer bowl and knead for a few minutes. If the dough is too sticky, add a little flour. If it is too dry, add a little milk. The dough should be smooth and not too sticky.Transfer the dough to a work surface, knead by hand a little and make a ball. Place in a greased bowl, cover and let rise for 1 hour or until double in size.Transfer the dough to the work surface, knead and roll to a 1½-cm.-thick leaf. Using a glass or cookie cutter, create 5- to 7-cm.rounds.Place the rounds on a lined baking sheet. Using a small cutter, create small holes in each doughnut. Cover and let rise again for 45 minutes.Heat oven to 190°.Bake doughnuts until the bottoms are browned, about 8 or 10 minutes.To prepare coating: In a small bowl, mix together sugar and cinnamon. Put the melted butter in a separate bowl. When the doughnuts are cooled a little, dip them in the butter and roll in the cinnamon mixture.Serve warm.
BAKED LOTUS DOUGHNUTS
Makes about 30 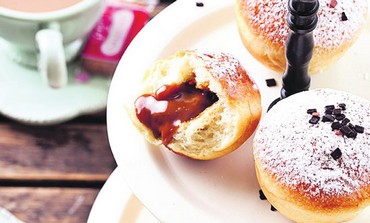 Lotus spread filled doughnuts (Kfir Harbi)These can be prepared and frozen, and they have a surprise inside – a Lotus spread filling.Courtesy of Amit Donskoy for LotusFor the filling
✔ 1 jar Lotus spread For the dough
✔ 1 kg. flour
✔ 1 bag of dry yeast (11 gr.)
✔ ¼ cup sugar
✔ 4 eggs
✔ 1 cup water
✔ 1 cup milk
✔ 300 gr. soft butter
✔ 1 tsp. salt For brushing
✔ 1 egg, beatenUsing a pastry bag, squeeze small dollops of the Lotus spread on a baking sheet and place in the freezer. You may also use two teaspoons to create small balls from the spread. They should be about the size of 2 cherries.To make the dough: Mix together flour, yeast and sugar. Add eggs, water and milk and knead until smooth. Add butter and salt and knead about 8 more minutes. Cover dough with a damp towel and let rise in a warm place for 90 minutes or overnight in the refrigerator.Divide the dough into plum-size balls.Using your finger, make a well in each and place the small frozen Lotus ball inside. Close the dough over the filling.Place the doughnuts on a lined baking sheet, leaving enough space between them to expand. Cover with plastic wrap and let rise for 30 minutes.Brush the doughnuts with egg and bake in a preheated 180° oven for 15 minutes.Remove from oven, let cool a little, sprinkle with powdered sugar and serve warm.
Advertisement
Subscribe for our daily newsletter