Cook up a great winter meal for friends and family.

By NERIA BARR
Warm and wonderful
(photo credit: Anatoly Michaelo)
Advertisement
Some people can afford to hire a chef to come to their home and prepare a perfect meal for their special guests. Harel Azikri is a private chef who specializes in creating “concept dinners” for his clients. He has been cooking at private events in his clients’ homes for the last six years, creating special menus tailored to his clients’ wishes. He presents Israeli haute cuisine, influenced by international trends.Azikri agreed to give us a few of his favorite recipes that anyone can prepare at home and make their guests feel as if a chef had prepared the meal for them.“I chose four easy recipes that take very little effort and time but will no doubt earn you many compliments,” says Azikri. “I chose chestnuts, great cheeses, herbs and oranges – all ingredients that for me spell ‘winter.’ FILO PASTRY CHEESE PARCELS
Makes 36 small parcels 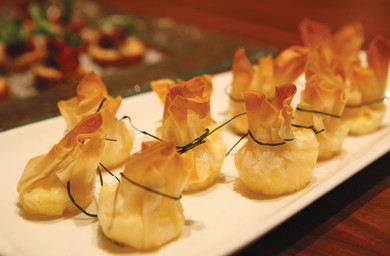 ✔ 8 filo pastry leaves
✔ 150 gr. grated cheddar or other hard cheese
✔ 150 gr. sheep’s feta cheese, crumbled
✔ 1⁄2 cup milk
✔ 1 egg
✔ A pinch nutmeg
✔ 100 gr. butter
✔ Bread crumbs
✔ Chives Defrost filo pastry. Heat oven to 200º.To prepare cheese mix: Combine together the 2 cheeses, egg, milk and nutmeg until smooth.Melt butter in a small skillet. Remove from heat.Place a filo leaf on a clean work surface. Brush the leaf with melted butter. Place another leaf on top and brush it. Cut the two leaves into 9 equal squares.Sprinkle each square with a small amount of bread crumbs and place a heaping spoon of the cheese mix on each square. Using the chives as string, tie each square into a parcel.Place the parcels in a buttered muffin baking form to keep the parcels from losing their shape and the filling from running out. Bake the parcels in the oven for 10-12 minutes or until the edges begin to brown slightly. Serve with green salad.

For the vegetable broth:

✔ 6-7 garlic cloves, minced
✔ 1 large onion
✔ 1 celery stalk and leaves
✔ 1 large zucchini or squash
✔ 2 large carrots
✔ 10 seeds black pepper
✔ 3 sprigs thyme
✔ 2 bay leaves
✔ 1⁄5 liter waterPeel the vegetables and roots. Wash well and chop roughly.Place all the vegetables in a big pot, fill with water and bring to a boil. Lower the heat and continue to simmer about 11⁄2 hours until you get a deep-colored clear broth. Strain and reserve the broth.To prepare soup: Melt butter in the pot. Add leek rings and sauté for 5 minutes. Add sage and cook 1 more minute. Add chestnuts and cook, mixing for 2 more minutes. Pour the vegetable broth back into the pot with the chestnuts and leeks and bring to a boil. Lower heat and simmer gently for 45 minutes. Season the soup with salt and pepper. Remove from heat, cool a little and puree, using a hand blender. Return to heat, add the puree and heat only until the soup reaches a gentle simmer. Stir from time to time. Serve hot, garnished with parsley or chives. 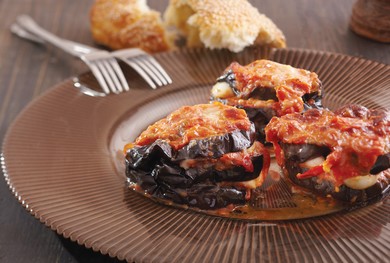 Melanzane is an Italian layered pie made from layers of eggplant, mozzarella cheese, tomato sauce and basil, with a crust of Parmesan cheese.✔ 2 eggplants
✔ 1⁄2 kg. cherry tomatoes, halved
✔ 1 onion, chopped
✔ 3 cloves garlic, minced
✔ Basil
✔ Salt and pepper
✔ 2 tsp. sugar
✔ 2 balls fresh mozzarella
✔ 100 gr. grated Parmesan cheese
✔ Canola oil for frying
✔ 2 Tbsp. olive oil Slice the eggplants to 1.5-cm thick rounds. Place on a baking sheet. Salt generously and leave to “sweat” at least 1 hour. Pat dry the eggplant slices with paper towels. Heat canola oil in a large skillet and fry the eggplant slices about 3 minutes on each side. Place fried slices on a paper towel to soak up the excess oil. Continue until all eggplant slices are fried.To prepare sauce: Heat olive oil in a small pot. Add onion and sauté until transparent. Add garlic. Add tomatoes and sugar and cook over high heat about 15 minutes until sauce thickens. Add chopped fresh basil, salt and pepper. Taste the sauce and correct seasoning if necessary.To arrange the dish: In a deep baking dish, create six circles using a little of the sauce. Place a slice of eggplant on each circle. Place a slice of mozzarella on top. Again put some sauce on the mozzarella, a slice of eggplant and a slice of mozzarella. Put a spoonful of sauce, another slice of eggplant and finish with a little more sauce. Prepare the other five melanzane the same way. Sprinkle a generous amount of grated Parmesan cheese on top.The recipe can be prepared up to this stage in advance and kept in the refrigerator.About 30 minutes before serving, bake in a 180º oven for 25 minutes or until Parmesan cheese is browned. Serve hot with fresh basil leaves.

✔ 200 gr. soft butter
✔ 2 cups sugar
✔ 4 eggs
✔ 500 gr. flour
✔ 2 tsp. baking powder
✔ 1 tsp. instant coffee
✔ 1⁄2 cup milk
✔ 1 cup sour cream
✔ 1 cup yogurt
✔ 1 tsp. vanilla extract
✔ Zest of 1 orange
✔ 150 gr. bitter chocolateHeat oven to 170º. Blend butter and sugar at medium speed until mixture is smooth (about 5 minutes). Lower speed and add eggs one at a time.Mix the dry ingredients together, then add to the egg mixture and blend briefly at low speed. Gradually add milk, sour cream, yogurt, vanilla extract and zest. Continue mixing about 1 minute until batter is smooth.Melt chocolate in a double boiler or in the microwave. Spray baking sheets or grease them. Pour 1⁄3 of the mixture to the baking form, pour half the chocolate over it and cover with the rest of the batter.To create the marbled effect, insert a knife halfway into the batter and move forward in circular motions along the baking form.Bake 1 hour and check with a wooden toothpick.Cool and frost with the rest of the chocolate. Recipes and photos courtesy of Harel Azikri Boutique Cuisine, 050-910-7149Follow @JPost_Lifestyle