World of mouth: A Hot Pot for a cold day

The column that brings you festivals from around the world; this week,salmon and vegetable stew from Japan’s Sapporo Snow Festival. 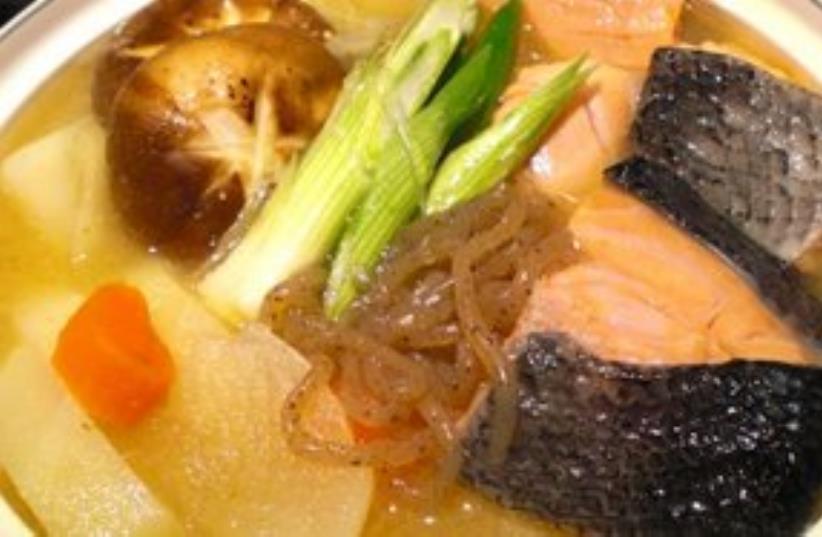 Fish staw_311
(photo credit: Norio Azumi)
Advertisement
Johanna Bailey is a blogger, freelance writer and student at the Hofmann Culinary School in Barcelona, Spain.
What do the White House, the Spinx, the Brussels Stock Exchange, Hello Kitty, Michael Jackson and the Stature of Liberty all have in common? They have all been sculpted out of snow at Japan’s Sapporo Snow Festival! The festival  takes place from February 7-13 in Sapporo, the capital city of Hokkaido, Japan’s northernmost island. It started in 1950 with 6 snow sculptures made by a group of high school students. Since then the festival has grown to the point that it now features some 250 ice and snow sculptures, and attracts up to two million tourists every year. I’ve actually been to the Sapporo Snow Festival. I remember wandering around a surreal winter wonderland populated primarily with frozen cartoon characters (by far, the most popular sculptural theme at the festival). I remember that it was very cold, and that there were lots of shivering bare-legged Japanese school girls clad in very short plaid mini-skirts. Most of all though, I remember the food. Because although the snowy sculptures are definitely the main attraction, for many attendees, wandering around the festival’s “Hokkaido Winter Food Park” and sampling Hokkaido’s many varieties of regional cuisine, is an integral part of the experience.Hokkaido is famous for its dairy products, especially milk and cheese, so naturally these products figure into a number of local specialties. The island is also famous for its beer, with the “Sapporo” brand being the most well-known. Unfortunately for Hokkaido’s dairy farmers, milk consumption has been steadily decreasing in Japan over recent years. One savvy Hokkaido businessman found a way to take advantage of the milk surplus when a few years ago, he developed a new milk-beer which he called “Bilk” (I suppose it was either that or “Meer”). Bilk contains 30% milk and supposedly looks and  tastes just like regular beer aside from its “milky scent.” Given the frigid temperatures during the festival , the idea of downing an ice-cold “Bilk” probably doesn’t hold much appeal for many. Luckily there are several warming dishes as well to snack on in the Winter Food Park. The island is famous for its ramen so there are always plenty of stalls selling bowls of tasty hot broth and noodles, ready to be slurped up by chilly tourists. A more unique local culinary specialty is the Jingisukan, “Genghis Khan Hot Pot.” The dish is a sort of stew, made with thinly sliced mutton (which is sometimes marinated beforehand), grilled with vegetables (pumpkin, mushrooms, cabbage) on top of a dome-shaped grill. The meat is then dipped into a specially seasoned sauce before eating. The dish is actually Chinese in origin but was brought to Japan at some point before World War II and quickly became popular in Hokkaido where there was an agricultural tradition of raising sheep and eating mutton (unlike in the rest of Japan where mutton and lamb are not part of the traditional diet). Hokkaido is also famous for its fish so it isn’t surprising that the Winter Food Park is full of regional specialties such as Monbetsu City’s Kani kourayaki (crab meat grilled and served in a crab shell), Rumoi City’s Unimeshi (sea urchin on boiled rice), Oshamanbe Town’s Kanimeshi (boiled rice mixed with crab meat), and Setana Town’s Hotate Kaigarayaki (scallop grilled and served in a scallop shell). One of the most popular seafood dishes is Ishikari City’s Ishikari Nabe, a rustic stew made with salmon and vegetables and seasoned with kelp broth and miso. Even if you haven’t just finished viewing an icy tableaux of Pokemon characters, this is the perfect meal to warm you up on a chilly day. If you’d like to make it yourself, try this recipe from Ishikari native, Norio Azumi of the Japanese food blog “Norio on Wine and Food.” Norio says that the two secrets to making a delicious ishikari nabe, are to put the miso seasoning in after the broth is cooked, and to not cook the salmon for too long. You can also add other ingredients such as fish cakes and tofu. Ishikari Nabe (Salmon and vegetable stew)
(Serves 2)Ingredients

Directions
Read more of Johanna's thoughts on food at: www.johannawrites.com
Advertisement
Subscribe for our daily newsletter