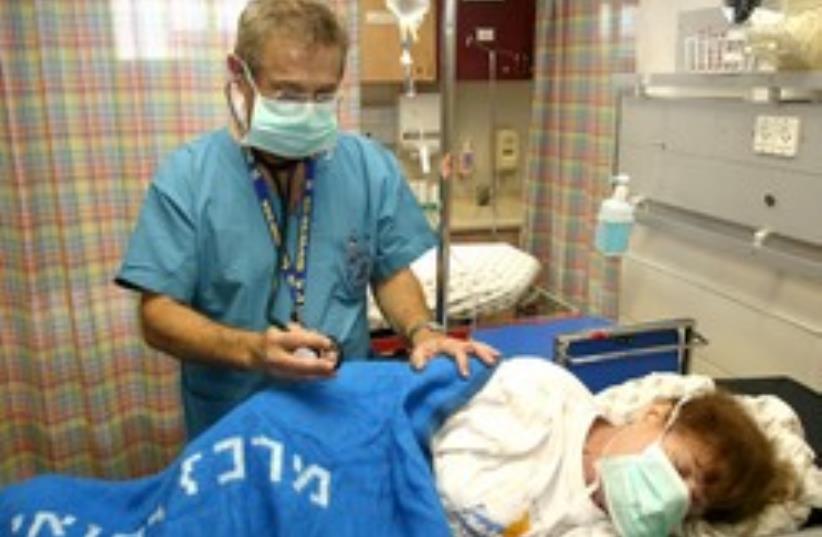 A fifth death of swine flu complications was announced in Israel on Friday morning.

The Health Ministry said the latest victim was a 50-year-old man who died in Jerusalem's Sha'are Tzedek Hospital.

The man, who had been suffering from diabetes and had high bloodpressure, was hospitalized a week ago after being diagnosed with theH1N1 virus, and due to his condition, he was immediately admitted tothe intensive care unit. He eventually succumbed to pneumonia, thehospital said.

Meanwhile, President Shimon Peres has promised Deputy HealthMinister Ya'acov Litzman to use his connections with one of the foreignpharmaceutical companies that has produced an untested vaccine againstswine flu, to reserve supplies for protecting Israelis against thevirus.

Litzman said Thursday he feared that Israel might beleft behind because it had not yet ordered supplies from any of thehalf-dozen pharmaceutical companies, mostly in the US, that aredeveloping vaccines.

H1N1 affects mostly children and people under 50, and producesmild symptoms in 99.9 percent of the cases. But in some high-riskpatients, such as pregnant women, people with chronic diseases,smokers, and the obese, it has caused serious complications and evenproven fatal.

In ameeting Thursday night, Prime Minister Binyamin Netanyahu, FinanceMinister Yuval Steinitz and Litzman agreed that the Health Ministrywould, in the coming days, purchase options to buy vaccines worthapproximately NIS 20 million from a leading European pharmaceuticalconcern. The vaccines are due to be available at the start of 2010.

Swine flu vaccine manufacturers are on track to startdelivering the first batches in September, the World HealthOrganization said Thursday.

Marie-Paule Kieny, WHO's vaccine director, said severaldrug-makers had started testing swine flu vaccine in humans, and thatearly safety results should be available next month, clearing the wayfor its use. Kieny also insisted that speeding the vaccine to themarket would not compromise its safety.

Litzman and Peres also discussed how the health system wasbracing itself for the winter, when the ordinary seasonal flu - whichis more much deadly and hits unvaccinated elderly and weak individualsthe hardest - is expected to arrive. The ministry said the H1N1 flucould cause the deaths of 700 Israelis in 2010, but that this was onlyan estimate.

Last week, Netanyahu gave orders to purchase enough H1N1vaccine - at a cost of NIS 450m. - to protect every Israeli, eventhough public health experts inside and outside the Health Ministry sayit should be given only to people at high risk for complications. TheTreasury insists that the vaccine be covered by the NIS 430m.allocation previously agreed upon for expanding the 2010 basket ofhealth services, but Litzman insists that it be paid for by a separateTreasury allocation, as the basket expansion is needed for morelifesaving and life-extending drugs.

In addition, vaccinating the population involves a number ofserious problems. The vaccine would be new and customized for the H1N1strain, unlike that for seasonal flu, in which safety has been provenin hundreds of millions of people who have received it - with slightvariations - every year for decades. The experimental vaccines are onlynow beginning to be tested on relatively small groups of healthypeople, but not on adults and children suffering from chronic diseasesor on pregnant women.

Although seasonal flu kills about 1,000 elderly, infants andchronically ill Israelis each winter and the protective vaccine isrecommended for a large portion of the population, only hundreds ofthousands of people go to their health funds in a given fall or winterfor the free vaccination.

The Health Ministry has not conducted a public survey todetermine whether Israelis - made nervous by reports of a handful ofcomplications and deaths - are willing to roll up their sleeves for twoshots of H1N1 flu vaccine and one shot of seasonal flu vaccine.However, the ministry is planning such a poll. Yet even if a fractionof Israelis say they want the vaccine, the ministry will order all thesupplies needed to protect the public.

In addition, the H1N1 virus could mutate by the time a vaccineis marketed, making the shots useless, or supplies may arrive too lateto have any protective effect.

Litzman, who was planning a short visit to the US startingSunday for other official purposes, told Peres he intended to meetAmerican health officials as well and ask for Israel to have a chanceat obtaining some of its future H1N1 supplies, despite being incompetition with the larger countries that have already put in theirorders.

Asked why the US would be willing to share some of its supplieswith Israel when other countries may be in greater danger, one ofLitzman's spokesmen said, "Is it forbidden to ask for it?"

He declined to disclose the original reasons for the deputy minister's visit to the US.

Since a 12-year-old girl suffering from a serious geneticdisease died of cardiac arrest Wednesday after recovering from an H1N1flu infection, the Health Ministry has decided to change the way itcounts victims of the virus.

The girl, who died at the Schneider Children's Medical Centerin Petah Tikva, was originally named by the ministry as the thirdfatality from the flu outbreak. But on Thursday, the ministry said ithad decided to include in the list the 44-year-old man who died lastweek at Tel Aviv's Sourasky Medical Center (Ichilov Hospital) afterrecovering from the infection.

"In some cases, there is doubt, and we can't absolutely ruleout the possibility that H1N1 infection was involved in a case ofdeath," the ministry spokeswoman said. "So we now regard four Israelisas having died from H1N1 complications."

The girl, who suffered from chronic illnesses, was treated lastweek with the anti-viral drug Tamiflu, which can reduce complicationsof H1N1 flu. She was sent home, but then suffered cardiac arrest. Shewas rushed back to Schneider and admitted to the intensive care unit.

The ministry said the government had no plans atthis time to keep schools and kindergartens closed after the end of theschool vacation on September 1 due to the H1N1 outbreak. But teachersand caregivers will be asked to teach the children to wash their handswith soap and water at regular intervals.

On Wednesday, day-care centers and after-schoolprograms under the Industry, Trade and Labor Ministry received strictdirectives on how to reduce the threat of swine flu among children intheir care.

"Children are at a greater risk of contracting the virus," saidTamar Almog, director of the Department of Day-care Centers andKindergartens in the ministry. "We need to take precautions."

The instructions from the ministry included keeping children athome if they exhibited any signs of illness; watching vigilantly forinitial signs, such as a high fever or runny nose; immediatelyquarantining children who did turn out to have the flu; and immediatelycontacting the local health care department if more than one childcontracted the virus.

Meanwhile, the half-dozen companies in the race to produce safeH1N1 vaccine for a world population that would break their doors downto get supplies are seeking healthy individuals to try it out.

IPS Research, a company in Oklahoma City, is accepting 200participants aged three to eight and over 65 for its clinical drugtrial. Without proof of safety, no vaccine will receive approval fromthe US Food and Drug Administration.

ABoston vaccine company called Replikins has a synthetic vaccine thathas not yet completed human clinical trials. A Virginia-based company,MedImmune, has announced that it could have more than 200 million dosesof its H1N1 vaccine - an unusual nasal spray rather than shot - withinweeks of getting FDA approval. The Swiss pharmaceutical companyNovartis AG has also developed an experimental vaccine based on usingcells as a medium and a wild-type virus rather than chicken eggs as theplace for growing it.

Ruth Eglash contributed to this report.