New tool helps home buyers get a glimpse of the future 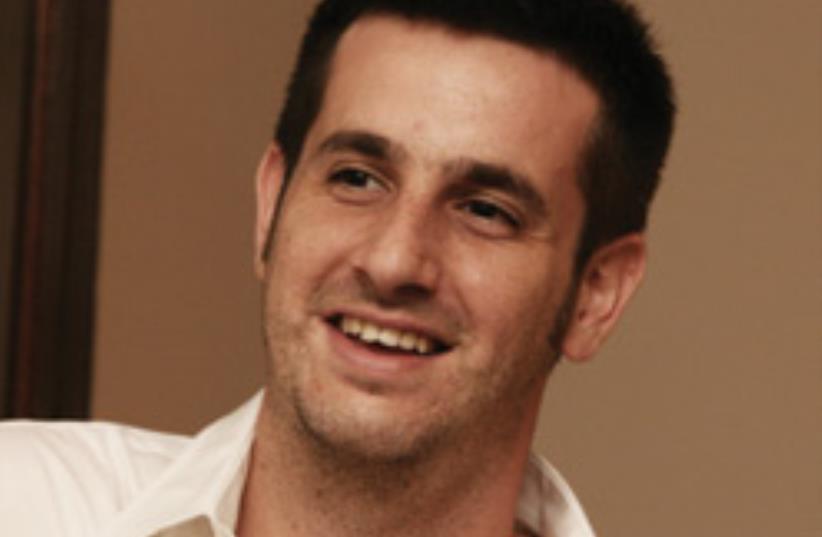 Asaf Engel, owner and CEO of 3-Dig marketing techn
(photo credit: Ron Friedman)
Advertisement
Construction on Gindi Investment's new luxuryapartment complex in Ramat Aviv is only scheduled to be completed in2012, but with the aid of a first of its kind three-dimensionalinteractive imaging system, interested buyers can already see, walkthrough and make alterations to their potential home.
"Think of it as a first-person-shooter videogame, only instead of killing zombies and monsters, you use thetechnology to help visualize and design, your new home," says AsafEngel, owner and CEO of 3-Dig marketing technologies, the company thatdesigned the first interactive simulator for the real estate industry.
Gindi's sales center in Ramat Aviv features a coffee bar,chandeliers and water fountains, but the most eye catching feature, isthe state of the art screening room, where sales executives givepotential buyers virtual tours of the apartments, lofts and penthousesuites that are currently for sale.
The multimedia room is dark and cool. A large screen that takesup a whole wall dominates the room. When senior project manager, MordiShabat, starts up the program, the room becomes illuminated by imagesof the yet to be constructed luxury towers projected on the screen.After a brief virtual elevator ride to the proper floor, the door opensto a life-sized three-dimensional simulation of the apartment. Shabatreaches for a joystick sitting on the table. As he pushes it forward,on the screen, it appears as if you've walked a few steps forward.
"We call it the interactive simulator, it's been running for the last three weeks," said Shabat.
The images are crystal clear. As you "walk" through the room,light reflections on the floor and surfaces changes accordingly. Withthe aid of the easy to use joystick, potential buyers can move aboutthe rooms, view the apartments from any angle they choose and even makealterations to the design. By pressing a button on the controller theoperator can switch between different flooring patterns, change thecolors of the doors and doorframes or lower or raise the height of theceiling. Another button shows you an overhead floor plan, indicatingthe user's location within the room.
Shabat said that Gindi prefers the use of theinteractive simulator over sample apartments, as is common in mostother projects, because it offers more flexibility and variety. "With areal apartment you only get to see one version, with this program, wecan show people many different types of units and modify the look ofthe apartment according to the client's tastes. Also, with a virtualapartment, there's no wear and tear."
The current system is a pilot project and shows only three ofthe 17 available apartment options. Customers get to take a compactdisk with a movie of their virtual tour home with them. Though the diskdoesn't include all the interactive features, clients can show thevideo to family and friends and get a real feeling for where they planto live.
"In this project we limited the program to suit the client'srequirements, but theoretically there is no limit to the possibilitiesthis tool can provide," said Engel. "Here we made it possible to alterthe floors and ceilings, but using our services, you can changeeverything from the kitchen design to the paint on the walls to theview outside the window."
"What this program gives you is the chance to turn the viewinginto an active process. Instead of passively sitting and watching avideo, you get to control where you go and what you look at and you canalways go back and look again if you want to. We find that this grabsthe potential buyer's attention to longer periods of time. A movie willhold your interest for a minute or two, but with this, they can playfor hours," said Engel.
According to Engel, the program used to design and operate theinteractive simulator is a novel marriage of two worlds, a graphicengine from the world of computer games and the architectural spaces ofthe real estate world.
The process of programming the interactive simulator took 3-Digthree months to complete, starting from when they received the nakedarchitectural designs from the architects. Slowly, programmers startedadding the design elements like furniture, artwork, textures andlighting, all of which change depending on your location in theapartment. This work is done by a group of talented programmers whocombine special computer skills with artistic creativity and an eye fordetail. In later stages the interactive elements are added as well assounds and the whole thing goes through a three-day rendering processon powerful computers.
Engel, who opened his company four years ago, said that the useof three-dimensional imaging in the real estate sector has changeddramatically over the last few years. From a tool used mainly by ahandful of innovative architects to help them visualize a structurebefore it's built only half a decade ago, until nowadays when nocompany goes without high-resolution three-dimensional photos andvideos of their properties, to show off to their potential clients. Forhim, the interactive element is the natural next step. "We pitched thisidea to real estate companies two years ago, only now the market isresponding," said Engel. "As far as we can tell, this project is thefirst in the world to combine gaming technology with real estatemarketing. We believe the potential is huge."
Engel said that since completing the project for Gindi, he hasreceived requests for similar programs from other real-estate companiesboth in Israel and abroad. "Something like this is too good to keepquiet for long. I'm guessing, you'll start seeing more and more of thisin the future."
Advertisement
Subscribe for our daily newsletter