By JUDY SIEGEL-ITZKOVICH
DECEMBER 17, 2013 16:39
Boy with burnt face 370
(photo credit: Courtesy photo from Kaplan Medical Center)
Advertisement
Surgeons at Kaplan Medical Center in Rehovot are warning against a dangerous “game” spreading via the Internet, setting steel wool alight to make sparks that causes skin burns.Assaf Mizrahi, a 13-year-old boy from Ness Ziona, suffered second-degree burns to his face when he tried the “experiment” out on Monday. His doctors said he was lucky that major bodily systems were not harmed.“I felt that my face was melting. Now that it happened, I wanted children to see what happened to my face so they will not do it,” Mizrahi said, as his parents agreed to the publication of his photos. 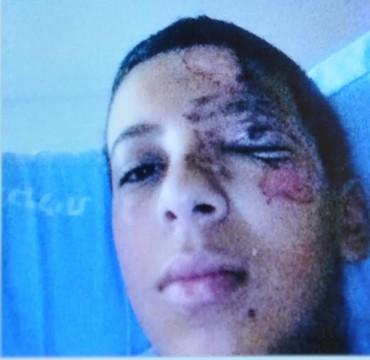 Brought to the emergency room with serious burns on his face, he was admitted to the plastic surgery department where he was treated him and doctors tried to prevent a bacterial infection.Mizrahi told the doctors that a friend of his, who saw the “game” online, lit the steel wool and threw it on the ground. Mizrahi picked it up as it burned, and sparks hit his face. There are videos and whole web sites that show the “fireworks” caused by the burning steel filaments.It was not the first time that he and his friends had been playing this “game,” he admitted.Dr. David Mendez, a plastic surgeon at Kaplan, said the boy had burns spread over his forehead, eyelids, nose and cheek. He needed painkillers, as well as creams to prevent irreversible damage to his face.“Assaf had a lot of luck that his trachea, nose, eyes and other organs were not permanently hurt,” Mendez said. “I call on children, their parents and teachers to avoid contact with burning steel wool. As the filaments are so thin, they reach high temperatures very fast and can cause much damage.”Mizrahi took to Facebook to warn other children not to try it. “I learned my lesson. This game could have ended with a much worse situation, so I decided to be an ambassador of goodwill so children will not be hurt.”
Advertisement
Subscribe for our daily newsletter