A DNA double helix is seen in an undated artist's illustration released by the National Human Genome Research Institute to Reuters on May 15, 2012. A group of 25 scientists June 2, 2016, proposed an ambitious project to create a synthetic human genome, or genetic blueprint, in an endeavor that is b
(photo credit: REUTERS/NATIONAL HUMAN GENOME RESEARCH INSTITUTE/HANDOUT)
Advertisement

In the US alone, there are about 7,000 “orphan diseases” – conditions that affect fewer than 200,000 people – and 95% of them have no known treatment. One of them, called Field's Disease, is considered to be the rarest orphan disease, as only three people are known to have ever had it, two of them being the twin sisters Catherine and Kirstie Fields from Wales.

Since the number of patients is so small and treatments are not moneymakers, such disorders are not studied by researchers, and pharmaceutical companies are unwilling to invest the money, time and manpower to develop treatments.

Allan-Herndon-Dudley Syndrome (AHDS) is a rare disorder of brain development that causes moderate-to-severe intellectual disability and problems with movement. This condition only affects males, disrupting their development from before birth. They have impaired speech and a limited ability to communicate, but seem to enjoy interaction with other people.

Most boys with AHDS have weak muscle tone (hypotonia) and underdevelopment of many muscles (muscle hypoplasia). As they get older, they usually develop joint deformities called contractures that restrict the movement of certain joints. Abnormal muscle stiffness (spasticity), muscle weakness and involuntary movements of the arms and legs also limit mobility. As a result, many people with AHDS are unable to walk independently and become wheelchair-bound by adulthood. 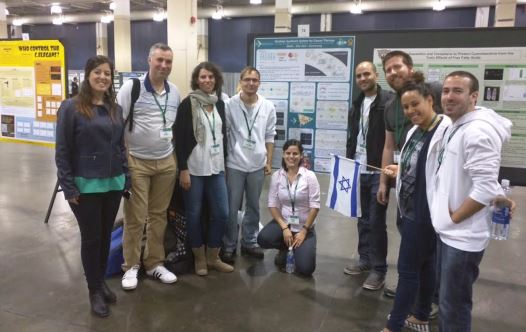 Geneticists discovered that mutations in the SLC16A2 gene – also known as MCT8 – cause the syndrome. The gene provides instructions for making a protein that plays a critical role in the development of the nervous system. The protein transports a hormone produced by the butterfly-shaped thyroid gland located in the lower neck called triiodothyronine (T3) into nerve cells in the developing brain.

Mutations change the structure and function of the SLC16A2 protein, making it unable to effectively transport T3 into nerve cells. A lack of this critical hormone in certain parts of the brain disrupts normal brain development, and because T3 is not taken up by nerve cells, excess amounts of this hormone continue to circulate in the bloodstream. Such high levels in the blood can be toxic to some organs and contribute to the signs and symptoms of AHDS.

Named eponymously for William Allan, C. Nash Herndon and Florence C. Dudle, the condition is inherited in an X-linked recessive pattern because the mutated gene that causes the disorder is located on the X chromosome, one of the two sex chromosomes.

Males are affected by X-linked recessive disorders much more frequently than females. A characteristic of X-linked inheritance is that fathers cannot pass X-linked traits to their sons, while a female with one altered copy of the gene in each cell is a carrier who can pass on the mutated gene but does not experience the signs and symptoms. Carriers of SLC16A2 mutations have normal intelligence and do not experience problems with movement.

New discoveries in Israel and abroad

Two recent discoveries by a scientist at Ben-Gurion University of the Negev (BGU) in Beersheba and his international colleagues may lead to new ways to treat patients with AHDS.

In the study, published in the peer-reviewed journal Thyroid under the title “AAV9-MCT8 Delivery at Juvenile Stage Ameliorates Neurological and Behavioral Deficits in a Mouse Model of MCT8-Deficiency,” researchers at BGU, Cedars-Sinai Hospital in Los Angeles and the University of Chicago identified a gene therapy approach that can potentially help prevent or reduce the devastating neurological symptoms in patients diagnosed with AHDS.

“The ability of this gene therapy approach to provide long-term rescue of neurological phenotypes in this mouse model is an important proof of concept to move this therapy to humans,” said lead author Dr. Gad Vatine of BGU’s department of physiology and cell biology and the Regenerative Medicine and Stem Cell Research Center. “This study helps pave the way for promising treatments that could alleviate the neurological symptoms in AHDS patients.”

“There currently are no successful therapies for treating the neurological symptoms that occur as a result of this condition,” said co-author Prof. Clive Svendsen of biomedical sciences and medicine at the Los Angeles hospital. “However, we’re finding gene therapies to be a promising new way to treat developmental neurological disorders, like AHDS.”

The team tested the potential of the viral gene therapy AAV9-MCT8 to see if it could correct brain defects in mice that carry the mutation and possess symptoms of the disease. The AAV9 vector acts as a carrier that helps deliver genetic material, like MCT8, into cells.

“We thought we might be able to get the transporter back with an AAV9 vector by genetically modifying it so it will produce the protein MCT8,” said Svendsen. Once the vector was encoded with MCT8, the team infused it into the bloodstream of juvenile male mice.

“While earlier work showed expression of the MCT8 protein in the brains of newborn mice, it was uncertain whether this would also happen when given to young male mice, at a time similar to when most children are diagnosed with the disease,” said co-author Prof. Samuel Refetoff, director of the endocrinology lab at the University of Chicago. “In fact, the mice showed an improvement in their learning curve, suggesting that the treatment has beneficial effects on cognitive and motor functions.”

The second study, also published in Thyroid under the title “Sodium Phenylbutyrate Rescues Thyroid Hormone Transport in Brain Endothelial-Like Cells,” was a collaborative project led by scientists at the Institut fur Biochemie und Molekularbiologie in Germany.

That team previously found that the drug sodium phenylbutyrate could help restore MCT8 function in mice that are deficient in it, but they wanted to expand on the work and find out whether the drug could potentially work in humans. Cedars-Sinai scientists had already created a human cell model of AHDS using induced pluripotent stem cells (iPSC), a special kind of stem cell that can produce any type of cell in the body with an individual’s blood sample.

Using cells from AHDS patients, the team was able to model patients' neurons and the blood-brain barrier in a laboratory dish. The team in Germany then used this model to test if the drug could also correct MCT8 in human-derived cells. The investigators found that the drug was able to activate the protein and restore the thyroid hormone transport function by stabilizing the MCT8 expression and activating additional thyroid hormone transporters.

“We now have two exciting breakthroughs for treating MCT8 deficiencies that might really have an impact on the disease,” Svendsen said. Both options call for future clinical studies to investigate these treatments in patients with AHDS.