HPV: Virus affects 90% of population, and most are unaware

It might surprise you to know that the papilloma virus will affect almost every one of us. HPV, as it’s commonly known, won’t affect most of the people infected with it, but some will have a higher risk of developing various cancers. Two experts from Hillel Yaffe Medical Center in Hadera discuss the virus and its effects, the vaccine and how each of us can manage it. Read the comprehensive advice here.

HPV has been in the headlines in recent years and awareness of it has grown, especially in light of the vaccine that is now administered to young teens.

The vaccine aims to significantly reduce cases of cervical cancer that the virus can cause, and protect against genital warts. We asked Prof. Ilan Baruchim, director of the Department of Gynecology and Gyno-Oncology, and Dr. Tomer Bar-Noy, a senior physician in the Gynecology-Oncology unit at Hillel Yaffe, to explain all aspects of HPV.

What is human papillomavirus (HPV) and how dangerous is it?

HPV is a group of over 200 species of viruses belonging to the Papillomaviridae  family. Some varieties, like the HPV6 and HPV11 strains are low risk and can cause conical warts - so-called "condyloma.”

This is a problem that is primarily aesthetic and not dangerous or linked to cancer. Warts are transmitted through sex via direct contact with a partner who has active or dormant condyloma. In some cases only individual warts are seen, but widespread infection can also occur.  Warts can be present in the vulva, vagina, cervix, anus and/or penis. Treating the warts depends on the location and areas affected.

If there’s a limited number of warts or a limited infected area, usually the treatment is topical, like ointments or gels.

In the case of more advanced cases with widespread warts, the proposed treatment will usually include using a laser or freezing with cold nitrogen that will “burn” off the warts, or surgical removal in cases where there is no adequate response to the various treatments, explained Dr. Bar Noy.

He added that these methods aim to destroy the condyloma lesions while trying to preserve the surrounding healthy tissue.

Even in these cases the strains are transmitted by sexual contact.

How contagious  is HPV?

"It should be noted that the rate of infection with the papilloma virus is very high, and in fact more than 90% of men and about 80% of women will be infected during their lifetime.  According to the Centers for Disease Control and Prevention in the United States about 50% of new cases of infection occur each year among young people aged 2-15. But Prof. Baruchim said that the good news is that in most cases the body's immune system can defeat the virus and eliminate it.

In a small proportion of cases (about 5%) in which the immune system won’t eliminate the virus, it will remain in the cells of the cervix or vagina for a long time, and then it’s called asymptomatic.

Usually at this stage there will be no signs of HPV in the body, so most of those infected with it may be unaware that they have been infected. If it’s one of the strains that is a high risk factor and it stays in the body, it may develop into pre-malignant cells first and later malignant cells. The process of developing from infection to a malignant tumor may take between 10 and 15 years, the professor added.

In Israel, every year, about 5,000 women develop a precancerous condition and about 200 new patients are diagnosed with cervical cancer. The average age is 40.

There is difficulty in predicting which of these cases will “persist” and become a premalignant or malignant condition. Yet, various risk factors are known to affect the chance of the disease progressing to a malignant condition, including the strain of the virus, duration of infection, smoking, chlamydia infection, dietary factors, use of hormonal birth control and more. 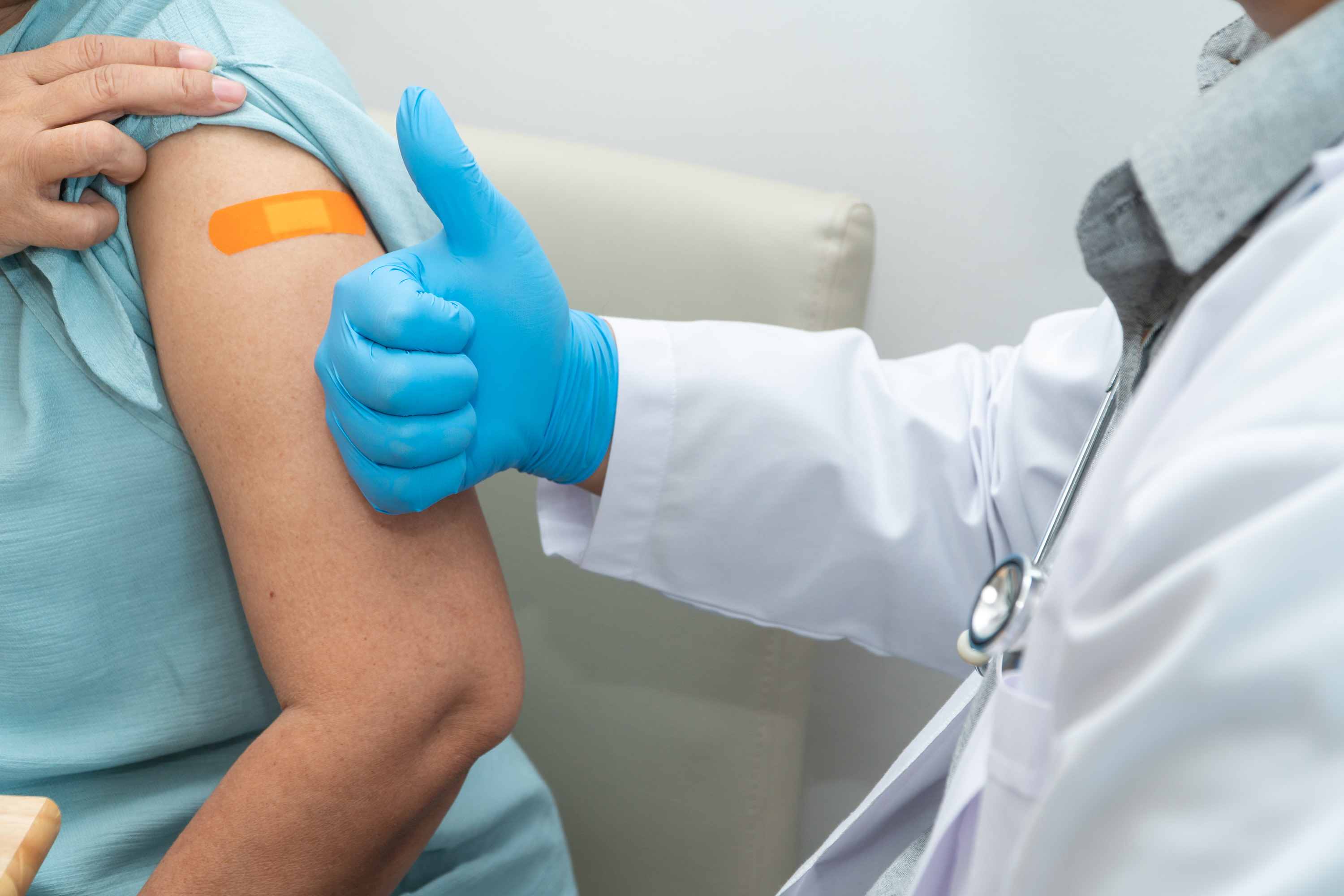 How to deal with papillomavirus

The only safe way to avoid infection is to abstain from any form of sex. However, in recent years we have witnessed a revolution in the field with the advent of the HPV virus vaccine.

This vaccine is considered a scientific breakthrough that allows for the initial prevention of pre-malignancy of cervical cancer and even prevention of condyloma. This synthetic vaccine is injected into a muscle in two or three doses over a period of six months.

The vaccine consists of treated parts of the virus and is therefore effective in producing antibodies, but won’t cause infection or disease. The vaccine is approved in most countries worldwide and is included in 58 different countries as part of the recommended vaccination routine for boys and girls.

Today there are three vaccines that protect against different strains. One is against the two high risk strains mentioned, the other is against these two strains and against HPV6 and HPV11, which don’t cause cervical cancer but are responsible for most cases of condyloma.

Both of these vaccines provide close to 70% protection against precancerous tumors and cancers of the cervix. The third (newer) vaccine protects against nine strains of HPV that are mainly involved in cervical cancer, and provides protection of close to 90%.

At what age can you get vaccinated against the papilloma virus?

In Israel, the vaccine has been included in the health basket since 2013 and is given to eighth-grade boys and girls free of charge in order to protect adolescents from infection before the start of sexual intercourse, as the effectiveness of the vaccine decreases significantly after exposure to the virus. In addition, it’s been verified that vaccination at younger ages leads to a better, more effective immune response.

Sexually active women can also be vaccinated even if they have had a pap smear that showed infection or conical warts, as the vaccine may prevent conditions caused by the virus strains to which they haven’t yet been exposed. One can be vaccinated until age 45, although in Israel the health basket subsidizes the vaccine until the age of 18 (for girls and boys) and up to the age of 26 for men at increased risk.

Most supplementary health insurance programs subsidize vaccines for men and women over the age of 26, and from the age of 27 to 45 you can consult a doctor to assess risk factors and the need to receive the vaccine.

How safe and effective is the vaccine?

Despite several press reports of unusual side effects, the vaccine's safety profile is high and the World Health Organization has determined that the vaccine is safe and effective, and the known and side effects after testing are local only and include redness, pain and swelling at the injection site. More rare side effects can include fever, headache, nausea, dizziness and even fainting. During pregnancy, studies show that receiving the vaccine won’t harm the fetus, but the information about it is considered partial, so at present, it isn’t recommended for a pregnant woman to receive a vaccine until after pregnancy.

It should be noted that resistance to vaccines isn’t new and some people avoid vaccinating their children with any vaccine, and rely on theories and opinions which cause unnecessary anxieties and fears, the experts clarify.

Are there other ways to reduce the risk of exposure to the virus?

The Israeli Society for Cervical Colposcopy and Pathology recommends a routine scan of all women to prevent cervical cancer. It is recommended to perform a Pap test from age 25 once every 3 years.

The Pap is a good screening test, but its sensitivity as a single test amounts to only 50 percent reliability. HPV strains can now also be tested from the age of 25 once every 3 or 5 years. The test is performed by taking a vaginal or cervical surface and sending it for PCR where the results will provide information on whether there is a carrier of the virus and if so which strains are present. If an incorrect finding is obtained in the Pap or the test is positive for high-risk strains, further investigation or close follow-up is required, depending on the results, states Prof. Baruchim.

In conclusion, HPV is very common  and there is a high probability that most of us will "meet" it during our lives. Also, this virus can cause warts (condyloma) and there is even a risk that the cervical cells will be transformed into pre-malignant and even malignant conditions if infection with high risk strains occurs. Today there are many ways to diagnose, treat and most importantly - prevent by vaccination. Therefore, be aware of the virus, its various strains, the screening and diagnostic tests and of course - coping and prevention. It’s possible that in the not-so-distant future, through immunization and prevention, we will be able to eradicate the severe disease, cervical cancer.