“We live in a health system with stresses and shortages, but we want to hear more than just to add panic buttons and more security guards." 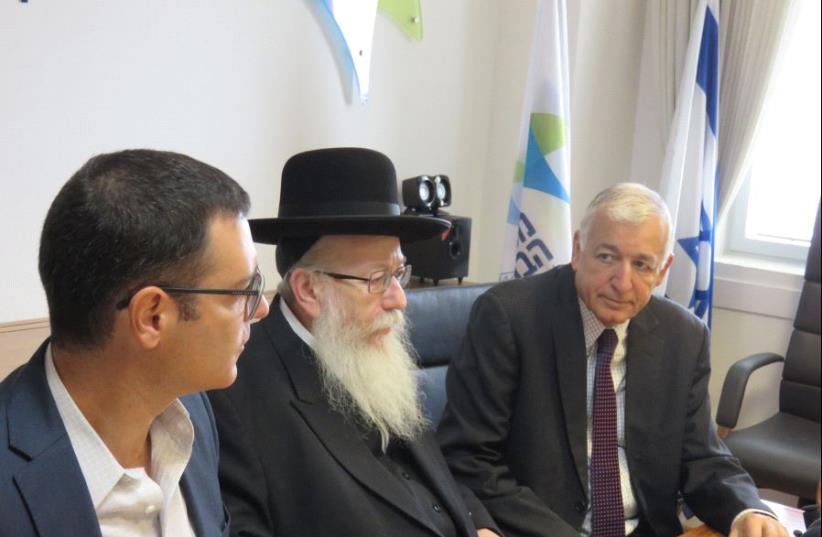 Bar Siman Tov (left), Litzman, and Mor-Yosef.
(photo credit: JUDY SIEGEL-ITZKOVICH)
Advertisement
Four months after Tova Carrero, a 56-year-old Clalit Health Services clinic nurse in Holon, was burnt to death on March 14 by a crazed 78-year-old patient, the threats of violence have become even worse, according to Carrero’s daughter Nofar. “I was told by nurses there that some stressed patients threaten them by saying: “If you don’t do what we want, we will burn you like they did to that nurse.”Carrero was speaking on Monday in the meeting room of Health Ministry director-general Moshe Bar Siman Tov who, along with Health Minister Ya’acov Litzman, has appointed a committee with the purpose of minimizing violence of all types in the health system and give medical teams a greater sense of security on the job.The murdered nurse’s daughter recalled the good her mother did for patients all the time, even inviting women undergoing fertility treatment to come to her house for injections when the clinic was closed. She also remembers her mother mentioning violence by drug addicts who tried to steal syringes. “My mother’s unnecessary death could have been prevented.”The committee, which was asked to formulate its conclusions by November, is headed by Prof. Shlomo Mor-Yosef, the former head of the National Insurance Institute and before that, the longtime director-general of the Hadassah Medical Organization.
Litzman said in advance that he would accept all the recommendations made by the committee, which is asking for significant public involvement in proposals to fight verbal and physical violence against nurses and doctors.Mor-Yosef said the phenomenon is worldwide and has long existed in this country, but the horrifying murder triggered the need to do something, which led to the establishment of a committee to investigate and recommend ways to improve the situation. Besides Carrero, public representatives on the committee include officials of the Health, Education, Internal Security and other ministries; the health funds; the Israel Medical Association; the Israel Nurses Association; and others.“We want to include the public, to hear what they think. We are recording and filming everything, including round-table discussions we will have in the field. We will hardly edit them, and we will put the proceedings on the website,” which will be in Hebrew only, the chairman said. “We live in a health system with stresses and shortages, but we want to hear more than just to add panic buttons and more security guards. We have wide authority to do more.”Litzman, who spoke briefly, said a nurse is the person who spends the most time with hospital patients, much more than a doctor does. He added that he was shocked by Carrero’s murder and that it was unacceptable when a radio reporter after the tragedy said that “sometimes medical staffers bring violence upon themselves.” Litzman added that due to the urgency of the matter, he would be pleased if the recommendations were prepared before November.Bar Siman Tov said there were signs that violence and threats have gotten worse. “The murder was not due to crowding in a hospital emergency room. It was in a health fund clinic in the community. Anybody with Facebook or a smartphone can make threats or carry out shaming of medical staffers,” he said. “Just as the health system creates solidarity in Israel, the system should also improve itself to reduce violence. We can’t solve every problem in the health system, but we want to do something significant that will change the long-term situation.”Ilana Cohen, the veteran head of the Nurses Association, said she was at first reluctant to be a member of the committee, because she had been on many committees in the past relating to health that did not accomplish anything. “I’ve sent many messages to the ministry, but nothing resulted from them. Nurses are fed up with committees. They want action. After the murder, the amount of violence in the system has increased.”There have been some 3,000 formal complaints filed about violence against medical staffers per year, which is apparently a very low figure because the majority do not complain, thinking nothing will come of it. A survey has shown that 85% of medical staffers have suffered some kind of violence and a third were exposed to verbal or physical threats in the past year.
Amit Sharir, the coordinator of the committee, said: “We know that decision-makers don’t have all the answers. So we decided that we want the public to speak up. They can make proposals, but the committee will decide in the end. We hope to meet in the field with residents in the periphery, people with low incomes, Arabs and ultra-Orthodox Jews who have less access to the Internet. Our website, is a major tool to collect information and disseminate it.”
The ministry has hired a private company named Tovanot to maintain the website.