A report comparing deaths from accidents in Israel to those in other OECD countries reveals that Israel has not succeeded in improving its situation over the years. 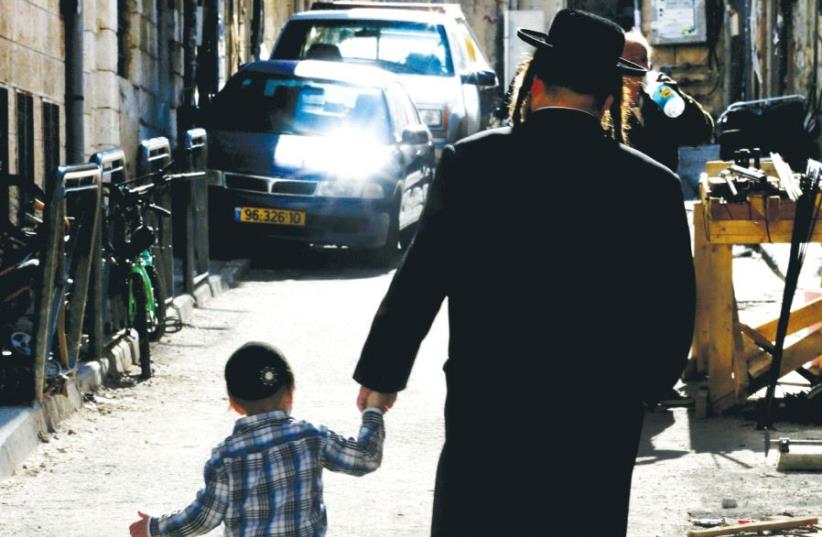 A Hassidic man with his child walking in Jerusalem
(photo credit: MARC ISRAEL SELLEM)
Advertisement
A report comparing deaths from accidents in Israel to those in other OECD countries reveals that Israel has not succeeded in improving its situation over the years.Even though Israel is very child-oriented, it ranks only 22nd among the OECD countries in child mortality rate out of the 53 member nations, with no significant change in ranking over the years.This is the sixth time that Beterem, the Israel Center for Child Safety and Health, has reported on accidents among children, but the first comparing Israeli levels with its OECD counterparts. The report is based on data processed from various sources including Beterem’s own database, the Central Bureau of Statistics, the Health Ministry’s hospitalization database, information on emergency room visits and comparative international data.The mortality rate from unintentional injury in Israel is slightly higher than the median mortality rate in all OECD countries and significantly higher than the mortality rate in the five countries with the lowest rates.Countries with a very sharp drop in mortality rates over the years are Estonia, South Korea, Portugal, Latvia and Luxembourg.If there had been a similar decline in Israel, the mortality rates would have been about half the actual figure, according to Beterem.The decline in the accidental mortality rate in Israel is similar to the median decline in the OECD countries. The drop for infants stands at about 55%, similar both in terms of the rate of decline overall and in different periods.Toddlers up to age four and teens aged 15 to 17 are most commonly involved in preventable accidents at home, then in the neighborhood, on the roads and least of all in public places. There was only a moderate decline in recent years for children under the age of four (28%), compared with a significant decline among those between the ages of 15 and 17 (64%).Toddlers and infants are more affected at home while children and youth are more at risk on the roads and in other public places. Boys are hurt much more often than girls in all measures of injury – mortality, hospitalization and emergency rooms.This gender gap increases as the severity of injury increases and as they grow up.Beduin children and ultra-Orthodox (Haredi) children coming from large families have a particularly high risk for injury.The risk of Bedouin children dying from injuries is almost twice as high as among all children in Arab localities.Children from Bedouin localities are more affected in the home and near the home, while other Arab children are more likely injured in road accidents.Deaths from accidents among Arab children are highest in the southern district. Efforts to reduce children’s deaths have been significantly more successful in the Jewish sector than the Arab sector.Haredi children are more likely to die in accidents than other Jewish children. The risk of death among those up to four years of age and between 15 and 17 is twice that of other Jewish youngsters.Road accidents are the main cause of infant deaths, while falls, injuries, and lacerations are the most common causes of injury resulting in ER visits and hospitalization. The most frequent cause of death for children, especially among Arabs, is their being run over by cars whose drivers go into reverse.As reported previously in The Jerusalem Post, this is because they don’t have anywhere else to play except in places where cars park. Other common causes include: choking, burning, smoke inhalation from fires, drowning and falling.The decrease in child mortality from accidents is 1.5 times greater than it is from illness.While the decline in death rate from unintentional injury is significantly higher among Jewish children than among Arab children, the decline from disease is similar in both populations.
Sign up for the Health & Wellness newsletter >>