Jerusalem to wheel and deal at unique bicycle exhibition

An amazing array of twowheeled vehicles of various sizes, materials and purposes is on display, with interactive exhibits, special performances and workshops. 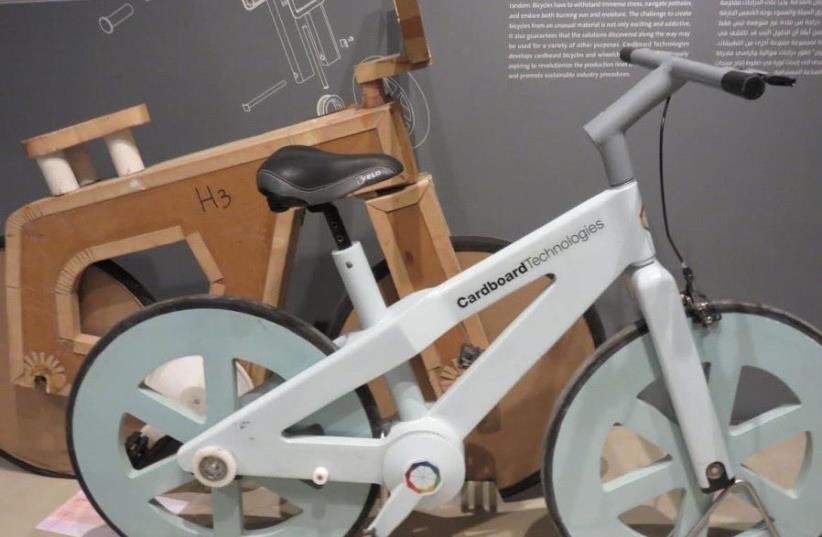 Photos fromJerusalem to wheel and deal at unique bicycle exhibition
(photo credit: JUDY SIEGEL-ITZKOVICH)
Advertisement
A unique, “legs-on” exhibition has opened at Jerusalem’s Bloomfield Science Museum to mark its 25th anniversary and the 200th anniversary of the invention of the bicycle.An amazing array of twowheeled vehicles of various sizes, materials and purposes is on display, with interactive exhibits, special performances and workshops.The largest international bicycle exhibition ever seen in Israel, it is spread over some 1,500 square meters both inside the museum and outside it, near the Israel Museum. They include dozens of bicycle exhibits from Israel and abroad, including unique and rare bicycle wheel models; historic collections from Canada, Holland, the US and Israel; innovation and technology; leading trends and directions in the field of bicycle riding; hands-on construction workshops for all ages; works of art and more.The exhibition regards bikes as wonderful machines originating in the 19th century with the invention of pedal-less bicycles, and, developing ever since, culminating in today’s innovative two-wheelers. A separate section of the exhibition deals with the human rider and his ability to learn and never forget a series of complex and synchronized actions. The third section of the exhibition relates to the effect of bicycles on urban and social changes: the hippie movement and the 1970s invention of the mountain bike; the bicycle as a tool to improve the situation of third-world populations; and the current use of bicycles that changes cities and urban lifestyles.The exhibition highlights the Wright brothers, who were bicycle builders and repairmen who used bicycles for their experiments before they invented the airplane.Also shown is the invention of the car by the German Karl Benz, who attached a motor to a tricycle.A section of how the bicycle emancipated women around the world who were suddenly able to leave homes and get around is include, along with a bike that can be ridden in a wind tunnel and two bikes facing each other that make music when peddled.Electric bicycles are not part of the exhibition.A cycling arena for children and adults has been set up in the Wohl Plaza, with dozens of strange and special bicycles, which include a unicycle, bicycles whose steering goes in the reverse direction, bikes with square wheels and more.There is an arena for children aged three to six years to ride through giant tubes, jump over bumpers and try to keep their balance. Visitors can also experience riding historic bicycles as well as “weird” ones such as tandem bicycles, a pedal bicycle for couples, hand-powered bicycles for people with disabilities, a “boneshaker” bicycle and more.Demonstration and construction workshops for the entire family will be held daily, and include a chance to make spinners whose center is a bicycle ball bearing and assemble and dissemble bicycle chains.Stands have been set up in the workshop area in which you are invited to continue studying the spinner you built – measuring the speed of its spin, listening to the rate at which it turns and watching it blink under a stroboscope.As part of the exhibition, a family-oriented tour dealing with the social aspects of bicycles will take place every hour during the summer and telling stories of pioneering inventors. One can also see bikes made of cardboard and others constructed with 3D printers. There are also movies of riders doing incredible acrobatics on their bikes.A rhythmic music and motion show by the Tararam band, including artists, musicians and dancers who combine drumming and dancing on and with bicycle parts, bringing them to life on stage. The show will take place several times a day.The 2 x 200 Bicycle Exhibition’s curators are Prof. Ido Bruno, an industrial designer and cycling enthusiast at Jerusalem’s Bezalel Academy of Art, and Dr. Amir Ben Shalom, Bloomfield’s chief exhibit developer.It is the result of an international collaboration headed by Bloomfield, joined by the Canada Science and Technology Museum in Ottawa, the Universum Science Center in Bremen; and the Città Della Scienza (City of Science) in Naples. The Canadian, German and Italian museums are partners in the exhibition funding and program and will present it themselves in the coming years, after the exhibition closes in Jerusalem in May next year.