They're motives for getting tattoos and piercings are also different! 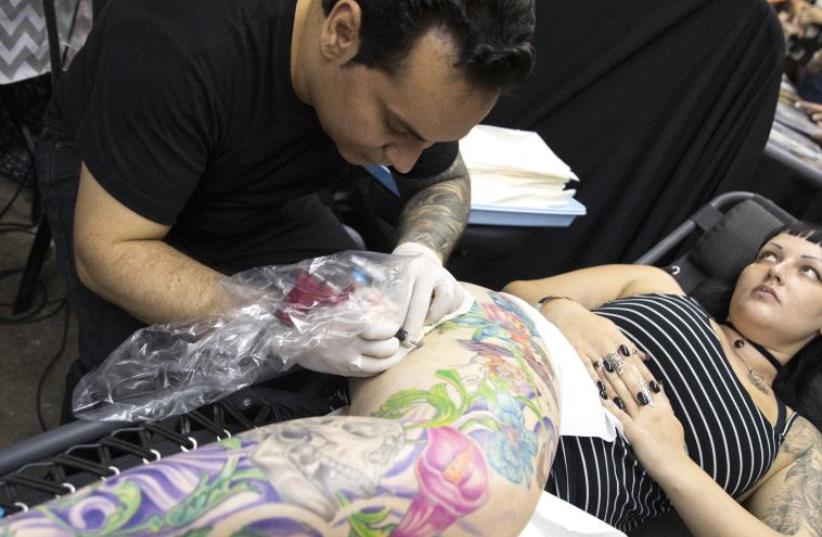 Third Annual Tel Aviv Tattoo Convention
(photo credit: JACK GUEZ / AFP)
Advertisement
Women who get permanent tattoos on their body receive more negative reactions from their family, employers and friends than men do, according to a study by Ariel University researchers.The study of 1,000 adults deals with the phenomenon of body decoration including tattoos, piercing and subcutaneous implants, which has not been sufficiently studied in scientific literature.The Torah prohibits tattoos and certain other permanent changes in the body’s appearance, because it was an ancient pagan practice. The prohibition of tattooing is in the book of Leviticus: “You shall not make gashes in your flesh for the dead or incise any marks on yourselves: I am the Lord.”The purpose of the study was to examine the phenomenon in Israel: patterns, motives, knowledge, attitudes and social perceptions of people who underwent body decoration compared to those who did not and gender comparison. It was conducted using a quantitative and structured self-report questionnaire, with the participants evenly divided between the genders, with the average age 35. Tattoo parlor owners were also queried.The vast majority knew that tattooing and piercing posed health risks such as infections, transmissions of HIV, Hepatitis C and hemorrhaging, but fewer than half of those who had tattoos said that they had been informed beforehand about the risks. Women said they suffered more complications from tattooing than the men did. Women also said that their parents, siblings, close friends, boss, colleagues and children were more negative about their having gotten tattooed than the reactions when men did it. Men also reported that it was more common for them to have tattoos on their feet or face, genital piercing or subcutaneous facial implants.People who are tattooed are exposed, especially at work, to perceptions that they are less professional and are asked to comply with a dress code that prohibits exposure to other body modifications that may offend other people. In some cultures, people with tattoos are more likely to be identified as delinquents and criminals.Tattooing, said the researchers – Dr. Rachel Nissenholtz-Ganot and Dr. Liat Koren of the department of health systems management, and Dr. Hagit Bonny-Noach of the criminology department – was accepted as far back as the 12th century for identification or showing that one belonged to a tribe or class. In more modern times, it became an act of rebellion and protest, and some even became addicted to the pain involved in carrying out the procedure.The main reasons the Israelis polled gave for getting tattoos were because they were “fashionable” (45%) and distinguished themselves from others (40%). Women reported more frequently about the motive of looking different to others (43% vs 37% for men). Foreign studies show that there has been an increase in body decoration in recent years, especially among the young. In the US, a quarter of the population has tattoos, compared to 8.5% in Germany and 10% in France.The researchers recommended that the Health Ministry find ways to educate youngsters and young adults on the medical and legal problems related to this issue, especially in boys. They also suggested that the ministry formulate stricter regulations and legislation on body decoration similar to what is happening in other countries around the world and closer supervision of tattoo parlors.
Sign up for the Health & Wellness newsletter >>