A look at households 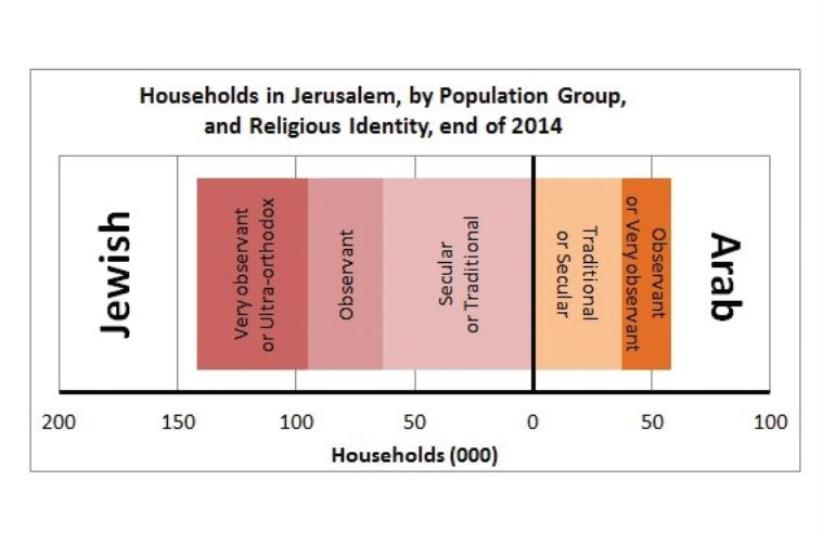 Households in Jerusalem, by population group, and religious identity, end of 2014
(photo credit: JERUSALEM INSTITUTE FOR ISRAEL STUDIES)
Advertisement
Every year, on the occasion of Jerusalem Day, JIIS publishes the annual Statistical Yearbook of Jerusalem – the main data source on the city, used regularly by the writers of this column.While this column usually tends to examine population data, today’s focus is on households. When trying to estimate demand for housing, as well as for other services, household data are sometimes more important than data on people.Of Israel’s 2.3 million households, 210,100 are found in Jerusalem.
Read More...
The capital’s share of the country’s households is lower than its share of population (8.8 percent compared with 10%), due to Jerusalem’s relatively large household size (3.9 persons compared with 3.3 in Israel).The balance between the Jewish and Arab households is also different than the population balance, with Jewish households forming 71% of total households, compared with 63% of the population.While average Jerusalem household size may be large, 38% of households are still comprised of just one or two people. These include the capital’s many students and other young adults.Among the Jewish households, this figure rises to almost half of households – 47% – slightly higher than the figure for Jewish households in Israel (46%).With such a high percentage of small households, it may be asked why the city’s average household size is larger than that of the country as a whole. The answer lies in the high percentage of households sized seven persons and above in Jerusalem (15%, compared with 5.9% in Israel).As of this yearbook, thanks to changes in the Labor Force Survey undertaken by the Central Bureau of Statistics, data are available about the breakdown of households by religious affiliation.Among Jewish households, secular and traditional households form 45%, the “very religious” and ultra-Orthodox form 33%, and observant (religious) households, 22%.Among Arab households, traditional and secular households form 64% (the majority of whom stated they were traditional); observant (together with a very small percentage of “very religious”) households, 36%.