No one can miss the four red drooping bags of garbage that are ineptly described as an “urban installation” by the city, which installed them in the fall of 2014. 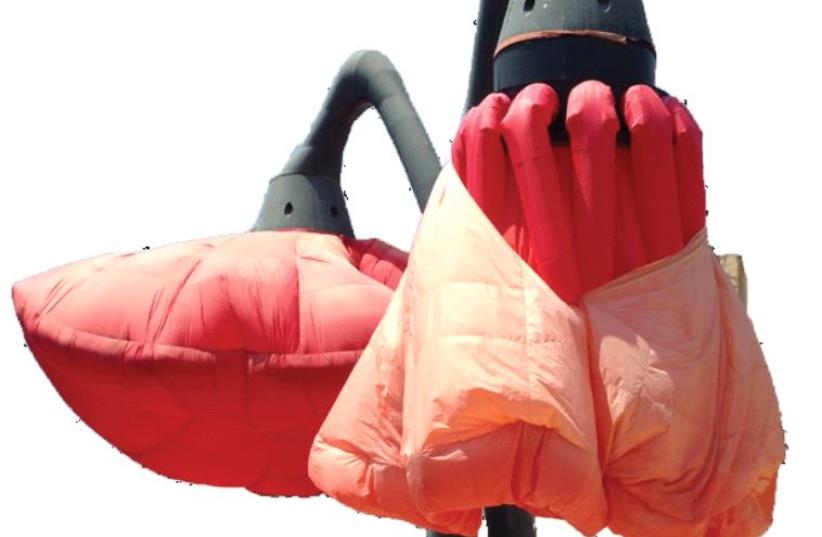 ‘Mayor Nir Barkat and city council, please remove these drooping bags, so ill-fitted to our climate and expensive to maintain.’
(photo credit: ERICA SCHACHNE)
Advertisement
The ribs of the giant red beast lay exposed to the sun, at once immodest and ghastly. It has been dying for more than a year and a half. The final ignominy is to see its innards left to dry in the baking Jerusalem sun.Unfortunately, this is not some sad animal, but the ill-conceived, ugly eyesores that sit across from the iconic Mahaneh Yehuda market.

No one can miss the four red drooping bags of garbage that are ineptly described as an “urban installation” by the city, which installed them in the fall of 2014.Conceived as part of the redesign of Jaffa Road after the light rail was inaugurated, the “drooping flowers” were supposed to be an interesting, European-style public art piece that would “bloom” when passersby walked under them and the light rail went by. But less than two months after they were installed on 12-meter-high metal tubes, the red “flowers” were damaged, as Judy Siegel-Itzkovich reported in February 2015.Costing the city around NIS 2 million, it was never clear in the first place why such a public art installation so ill-fitting to the climate was chosen. In a city with intense seasons, why were colossal bags that inflate – which are easily susceptible to damage from rain, snow and the strong Middle Eastern sun – installed? Instead of absorbing the loss and transforming the metal tubes into nice, giant lampposts, the city has persisted in throwing good money after bad into this gross installation. I’ve documented the continuous damage, and apparent repair, to the red monstrosities month after month. Now, once again, the fabric has been ripped away on one of the flowers, and the inner tubes that inflate the “bloom” are revealed – as the dirty urban embarrassment squats there for all to walk under.Every city makes mistakes and installs urban art that looks good on paper, but doesn’t actually work well. Tucson, Arizona, once installed open sewer pipes with cement “sewage” bursting forth in a certain neighborhood. After a vocal rebellion by residents, the terrible public art was removed. The same outcry followed the installation of the “rusted metal wall” installed in 1981 in Foley Plaza in New York City, and later removed.The worst problem with the drooping red flowers across from Mahaneh Yehuda is that they are eyesores that do not blend into their space, sandwiched between the light rail, dumpsters, a few shops and a religious neighborhood. They are incongruent and don’t suit the area.They continuously fall apart and are in need of repair to merely maintain them.If city hall likes them so much, it should move them to Safra Square and install them there for the glory of Jerusalem. One suspects that their blight would never be accepted at such an exalted venue, and they have been dumped on the people of the shuk, ignored and left limp, month after month, a victim of the elements.This unwillingness shows a lack of imagination. Mayor Nir Barkat and members of the city council, remove them or change them into something sensible, such as large lampposts with fixed shades – rather than flaccid bags so ill-suited to the climate here.