For one of the most powerful men on the planet, it is an unsavory truth to ponder as he polishes his electoral armor to win a Kremlin return in the March 4 presidential vote.

By REUTERS
DECEMBER 5, 2011 09:10
Vladimir Putin_311
(photo credit: Reuters)
Advertisement
MOSCOW - One of the worst election results of his 12-year rule has exposed Vladimir Putin's Achilles heel: his vulnerability to a mood change among the Russian people.For one of the most powerful men on the planet, it is an unsavory truth to ponder as he polishes his electoral armor to win a Kremlin return in the March 4 presidential vote.RELATED:
Putin's party clings to reduced majority in Russia
Russia: Watchdog complains of election violationsWin he may, but Sunday's parliamentary poll showed millions of Russians are growing tired of a leader who plans to rule for at least six more years. Such a souring of mood, in a system without credible rivals, had seemed inconceivable as recently as September when he announced his plans to reclaim the presidency.Putin's party won about half of the vote, far less than the 64 percent it won in 2007 when Putin, now 59, was riding high on Russia's longest economic boom in a generation.Many Russians were so fed up on Sunday that they even voted Communist, 20 years almost to the day since the Soviet hammer and sickle flag was lowered over the Kremlin for the last time.Though Putin remains Russia's most popular politician, the disenchantment exposed by the election bodes ill for the long term stability of a political system crafted around his personal popularity and patronage, some businessmen and politicians said. 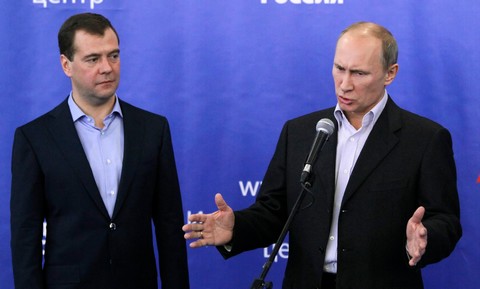 "Listen, for the ruling circle, he remains the leader. There is no question about that whatsoever," said one Russian businessman on condition of anonymity because of the sensitivity of being seen to criticize Putin."There is a change in the way he is seen on the ground but it would have to get much sharper for there to be any move to find an alternative. And there is no alternative."But others whisper that Putin and his ruling circle of former spies, billionaire oligarchs and Kremlin officials have been troubled by the shift in public opinion."He is not losing power, but he realizes he is losing the people," said one Russian source.Putin gets booed...times have changedFor supporters and opponents alike, the election has shown the winds of change may be starting to blow against Putin, who ruled Russia as prime minister in late 1999, then as president from 2000-08 and then again as prime minister since 2008.A turning point in popular perceptions came just two weeks before the election when sports fans booed and whistled the macho former KGB spy as he stepped into the ring at a martial arts fight in Moscow.Allowing just a blink of bewilderment as he peered around the stadium, Putin pressed on to hail fighter Fyodor Yemelyanenko's victory over American rival Jeff Monson. One fan screamed "leave" as Putin spoke.Three days after the outburst at the martial arts fight, Putin grimaced when some lawmakers failed to stand up as he entered the lower house of parliament for its last session before the election, a rare sign of insolence towards Russia's most powerful man. 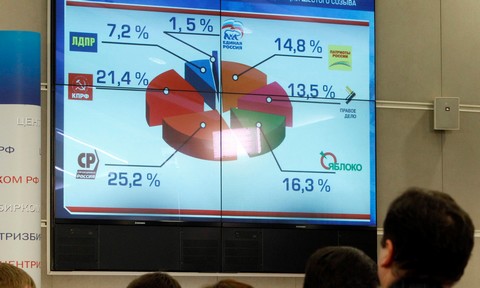 For the Kremlin's political managers that is serious. Putin assumed role as anchor of Russian stability for everyone from billionaires to pensioners getting along on 8,289 rubles ($270) a month depends on his popularity.Without it, Putin becomes vulnerable. And until now, Putin's carefully cultivated macho image -- riding a horse bare chested, tracking tigers, flying a fighter -- allowed for no suggestion of vulnerability."It (the election result) shows that Putin is vulnerable but the million dollar question is how he deals with being vulnerable. Does he spend like crazy or does he crack down?" said one Western banker."The vulnerability is going to be a worry for everyone in the elite. There is no rush but it is an indication that the next six years are going to be a hell of a lot harder than the last 12 years were for Putin."'He has created a system where only he can be president'Putin's Sept. 24 announcement that he will run for the presidency in 2012 after four years as prime minister cemented a perception that Putin has locked himself into a job only he can do."He has created a system where no one but he can be president, a system only he can rule. It is an historical trap," Grigory Yavlinsky, founder of the small Yabloko party which ran against Putin's party in the Sunday vote, said in an interview."It is completely obvious to everyone that everything cannot stay as it is. You are spectators at a moment in history when those deep historical shifts are taking place," he saidYavlinsky said that Russians were employing a weapon they have used against tsars and general secretaries for centuries: turning away from the leader, a trend underlined by the jokes Russians use to satirize their masters in the Kremlin."Putin has long outgrown the position of president. He is the chief (vozhd). His place is in the mausoleum," goes one such joke, referring the mausoleum on Red Square which houses the embalmed body of communist state founder Vladimir Lenin.With the resources of state behind him, Putin is almost certain to win the March 4 presidential election but opponents fear he will usher in a period of stagnation that could set Russia on the path to turmoil.After winning in 2012, he is free to run for another term from 2018 to 2024, a quarter of a century after he rose to prominence in late 1999."While Putin's power will remain unchallenged, the political system is more vulnerable," said Christopher Granville, managing director at Trusted Sources, a research firm specializing in emerging markets."Putin's decision to run again and to hold onto power has accentuated that disenchantment with him and the ruling establishment he leads," said Granville, who has also served as a British diplomat in Moscow.Party problems lead to Putin's problemsUnited Russia's failure was Putin's failure.United Russia had to fight against opponents who have branded it as a collection "swindlers and thieves", a slogan it dismisses as the invention of those who wish to destroy Russia.Putin added to confusion in the campaign by making Medvedev lead United Russia, a difficult job for a party which views Putin as its main electoral asset.Such was the embarrassment with the election results that Medvedev, unshaven and tired, evoked nervous laughs at campaign headquarters when he quipped in front of Putin that at least it was clear United Russia would get into parliament.Personal disaffection could prove a problem for Putin if, as he has suggested in recent statements, Russia's $1.9 trillion economy is likely to be struck by a global slowdown and risk aversion due to the euro zone debt crisis.When President Boris Yeltsin unexpectedly resigned on the last day of the millennium and handed over the nuclear suitcase to Putin, it was a breath of fresh air for many Russians.Putin's vigor and even his sometimes crude language -- vowing to wipe out rebellious Chechens "in the shithouse" -- appealed to many Russians after the chaos which had accompanied the fall of the Soviet Union and thrown millions into poverty.He promised order and reform and he was blessed with a bull market for the lifeblood of the Russian economy: oil.Russian nominal gross domestic product (GDP) rose to $1.9 trillion this year from just $200 billion in 1999.But for Russia's 143 million people, high prices, a slowdown in real wage growth, the crumbling welfare state, unemployment and corruption top the list of concerns.To fix those problems, businessmen have been arguing for years that Putin should implement far reaching economic reforms to open up the economy. But such reforms would challenge some of the powerful barons who investors say surround Putin."Many Russians voted against the system and Putin is the head of that system," Stanislav Kucher, a commentator with Kommersant FM radio station."Putin has a very difficult choice. To survive politically he needs to reform but he can only reform if he gets rid of many vested interests in the ruling circle. To stay as he is means the opposite of political survival."
Advertisement
Subscribe for our daily newsletter