By REUTERS
police thwart Occupy Wall Street plans_311
(photo credit: Reuters)
Advertisement
NEW YORK - Hundreds of people protesting against economic inequality marched in New York's financial district on Thursday and there were minor skirmishes with police, but authorities thwarted their bid to shut down Wall Street.Police barricaded the narrow streets around the New York Stock Exchange and used batons to push protesters onto the sidewalk as they marched through the area during the morning rush hour to prevent financial workers getting to their desks.RELATED:
Judge upholds eviction of Wall Street protestersProtesters banged drums and yelled "We are the 99 percent" -- referring to their contention that the US political system benefits only the richest 1 percent. Some chanted at police: "You're sexy, you're blue, now take off that riot suit.""I feel like this is a beautiful moment to take back our streets," said Rachel Falcone, 27, from Brooklyn. "We need to prove we can exist anywhere. It's gone beyond a single neighborhood, it's really an idea."About 75 people were arrested, police said, but by 11 a.m. local time protesters had returned to nearby Zuccotti Park, which had been the two-month-old Occupy Wall Street movement's camp headquarters before police evicted them from the space on Tuesday.The New York Stock Exchange opened on time and was operating normally. 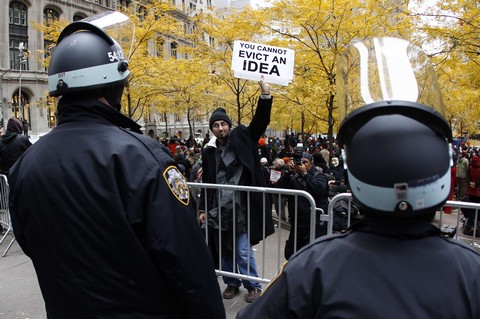 The turnout for the march on Wall Street, which kicked off a day of action in New York and elsewhere in the United States, fell short of expectations by a spokesman for the protesters and city officials for tens of thousands of people."We certainly want to see more people mobilize and show up," said Occupy Wall Street spokesman Jeff Smith. "It was a fantastic turnout, we occupied corners and intersections all over downtown."

Protesters are also planning to take their protest to 16 subway hubs later on Thursday, then return to City Hall for a rally before marching across the Brooklyn Bridge. Last month, more than 700 people were arrested during a similar march across the bridge after some protesters blocked traffic.The support of labor unions and liberal group Moveon.org could boost numbers at the New York City Hall rally.In Los Angeles, hundreds of protesters and union members marched through the city's financial district chanting "Whose streets? Our streets" in solidarity with Occupy Wall Street, while in Dallas more than a dozen people were arrested when police shut down their six-week-old camp near City Hall.
Advertisement
Subscribe for our daily newsletter