Ayman Odeh: The man who would be ‘King’ 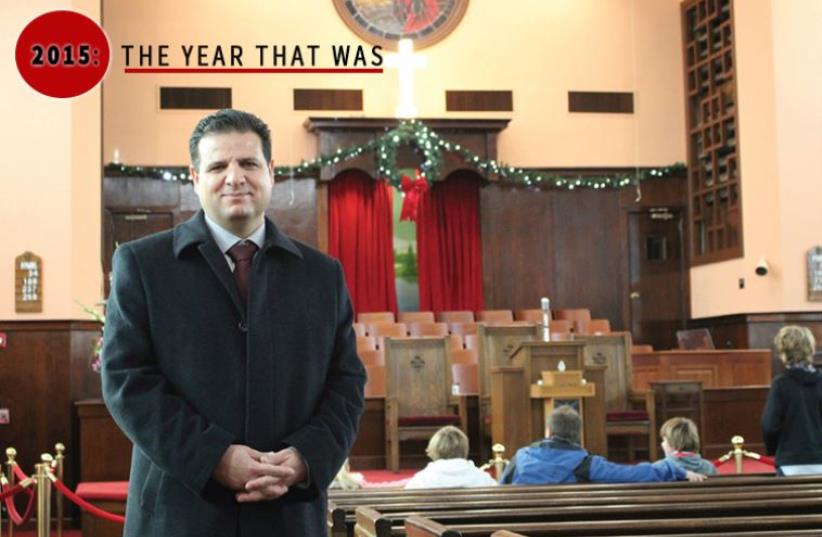 Joint List Chairman Ayman Odeh poses inside and outside of the Ebenzer Baptist Church in Atlanta, Georgia
(photo credit: JPOST STAFF,Courtesy)
Advertisement
Wherever Joint List chairman Ayman Odeh goes, headlines follow.Take his controversial visit to the US in early December, where Odeh met with politicians, Obama administration and State Department officials. The comprehensive and wide-ranging nature of his trip – which included interviews with major media outlets, meetings with Palestinian and Jewish activists – is rare for an Arab MK.Odeh’s refusal to enter a meeting convened by the Conference of Presidents of Major American Jewish Organizations, because the group’s office shares space with the Jewish Agency, set off a intense debate in the press.

Click here for more stories from the "2015 - The Year That Was" Jpost specialThe reaction to his decision almost overshadowed the primary goal of “raising unique issues and problems of the Arab citizens of the state, which have almost no presence in the international discourse,” he explained prior to his departure.“I went to the US to talk about the issues for Arab citizens,” though the usual focus most of the time is on the conflict, he told The Jerusalem Post when he returned. “No doubt, this is the main issue and most important, but I also talked about Arab issues such as discrimination and integration into Israeli society.”“There can’t be real peace without improving the integration of Arab society and making it part of the political game. The Arabs used to sit on the side, but we want to use our weight to influence,” he added.While there, he discovered that Americans he met with had little knowledge of the domestic problems plaguing his community.“They did not know about high poverty rates and unrecognized villages,” for example, he asserted.But as a proponent of Dr. Martin Luther King Jr.’s belief that coexistence between two peoples is possible, he believes there is hope for Arabs and Jews living side by side. It is fitting, then, that Odeh visited the Ebenezer Baptist Church in Atlanta, where King often frequented.“Maybe for you in America, Dr. King has become boring because you hear about him so much,” he told The Nation magazine during a visit to their New York offices, according to the Mondoweiss website. “But for me he is the man who has most inspired me. During the campaign I used to speak about him all the time. In my first speech in the Knesset, I quoted him.”During the interview, he often mentions the American civil rights activist by name, saying that he seeks to connect the African-American struggle to that of Arab citizens of Israel.“We seek an alternative which will be good for the entire population of Israel,” he said.However, many of his critics in Israel would scoff at the comparison, arguing that his lack of condemnation for using violence counters King’s nonviolent path and that the comparison of Israeli Arabs to African Americans is not accurate.As for achieving an official peace agreement, he believes that the two-state solution is the only way to establish peace between the Israelis and Palestinians.He suggests that the plan should be based on the model of peace treaties Israel has with Egypt and Jordan.It is Prime Minister Benjamin Netanyahu and Defense Minister Moshe Ya’alon, however, who “are allowing the settlers to run wild and stealing land,” he said, explaining that a government that “supports settlers” is an impediment to peace.“A month ago, Netanyahu tried in polished English to hide the fact this his government is based on racial incitement against Arab citizens – and his continued incitement and hatred,” he had said before he left for the US.Odeh dismissed claims that a withdrawal from the West Bank would lead Israel to becoming a Wild West of violence, much like many describe the consequences resulting from Israel’s disengagement from the Gaza Strip in 2005.A two-state solution could be based on the land-for-peace deals reached with Egypt and Jordan, he said.As for the stability of his Joint List, which consists of four parties, including Hadash, which he heads, he is adamant that it will not break apart like many have predicted.Despite the differing views and sometimes “difficult arguments” among the parties and personalities in the Joint List, Odeh says that most of the time they agree.The three other parties are Ta’al, Balad and the southern branch Islamic Movement’s United Arab List.On political issues there is overwhelming agreement, he said, while on domestic local issues there is more disagreement.For example, he mentions how the Islamic Movement’s party often pushes for more conservative policies than Hadash, especially when it comes to women’s rights issues.As for the ongoing terrorism wave in Israel, and how many Jews who at first had been pleasantly surprised by his coexistence rhetoric during the last election campaign have since soured on him and the Joint List because of their lack of condemnation of ongoing violence, Odeh replied that it is a “difficult period.”Asked by Army Radio host Razi Barkai in October if throwing rocks is part of an armed struggle or legitimate protest, Odeh said, “I always blame the ‘occupation’ for being guilty. I cannot tell the nation how to struggle, where and at which target to throw the rock. I do not put red lines on the Arab Palestinian nation.”At times like these, he continued in the interview with the Post, individuals return to their own people to show solidarity with them.The Joint List head compares the first intifada, which began in 1987, with the second that broke out in 2000.“There is no doubt that the Palestinians got more from the first and lost the second, which even moved them backwards,” he said, pointing out that “there is no need to attack Jews, but instead to focus on the occupation.”“I don’t accept the Zionist idea,” Odeh said bluntly at one point during our conversation. “The main struggle is not fought with knives, but against the occupation. The root of the problem is the occupation.”