The European Jewish Congress strongly condemned Le Pen's comments and called for the French judiciary to prosecute him to the fullest extent of the law. 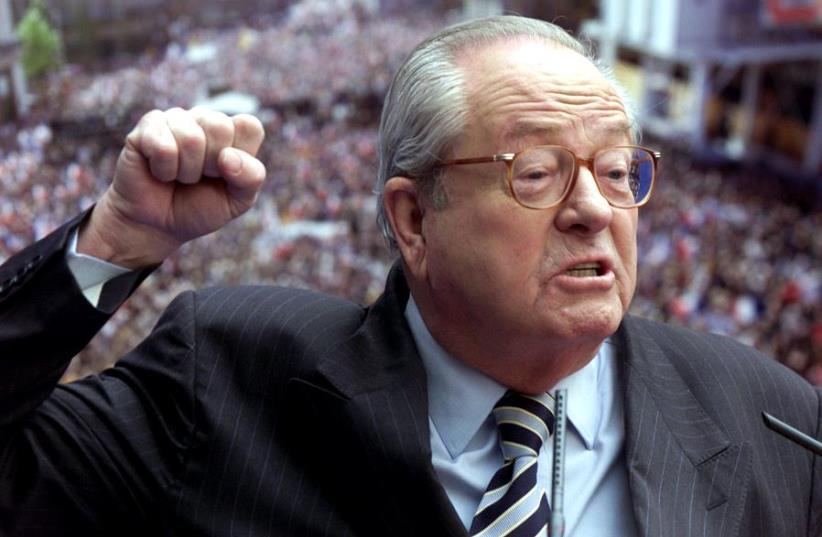 National Front founder Jean-Marie Le Pen
(photo credit: CHARLES PLATIAU / REUTERS)
Advertisement
The European Jewish Congress on Thursday called on the French judiciary to use the full weight of the law and impose the strongest possible punishment on Jean-Marie Le Pen, founder and former leader of the National Front party, for an alleged antisemitic comment he made in 2014.When asked about Jewish singer Patrick Bruel’s criticisms of his party, Le Pen responded: “We’ll take care of that batch next time,” using the word fournée for batch.Many interpreted the comment as a pun on the word four, meaning oven, as a reference to the Nazi gas chambers and the authorities charged him with racial incitement, after the interview was filmed and posted on the National Front’s website.Le Pen has denied that the remark had any antisemitic undertones.Marine Le Pen, his daughter and incumbent leader of the National Front, rebuked her father for the comment calling it a “political mistake.”Earlier this week, judicial sources announced that he would face trial. The European Jewish Congress was a civil party to the lawsuit.Le Pen, 89, has routinely minimized the Holocaust and has been convicted of racism or incitement of racial hatred several times. In 1996, he was convicted of inciting racial hatred for saying the gas chambers used to kill Jews in the Holocaust were “merely a detail in the history of the Second World War.”“Le Pen is an unrepentant antisemite and a very clear warning has to be sent to people like him that racism and bigotry will no longer be tolerated in France,” Dr. Moshe Kantor, president of the organization, said. “We hope that if found guilty he will face the fullest punishment possible under French law.”“We deeply appreciate President Emmanuel Macron’s strong words condemning antisemitism and we hope that this will be followed by action against people like Le Pen.” Kantor added.Earlier in the week, Macron spoke at an event in Paris to commemorate the 75th anniversary of the Vel’ D’Hiv round-up. At the event, Macron admitted French official culpability for the roundup and condemned modern- day antisemitism including anti-Israel sentiment.