‘Enough is enough,’ May vows after London attack

12 arrested in connection with car ramming, stabbing spree by terrorists that killed 7, wounded 48 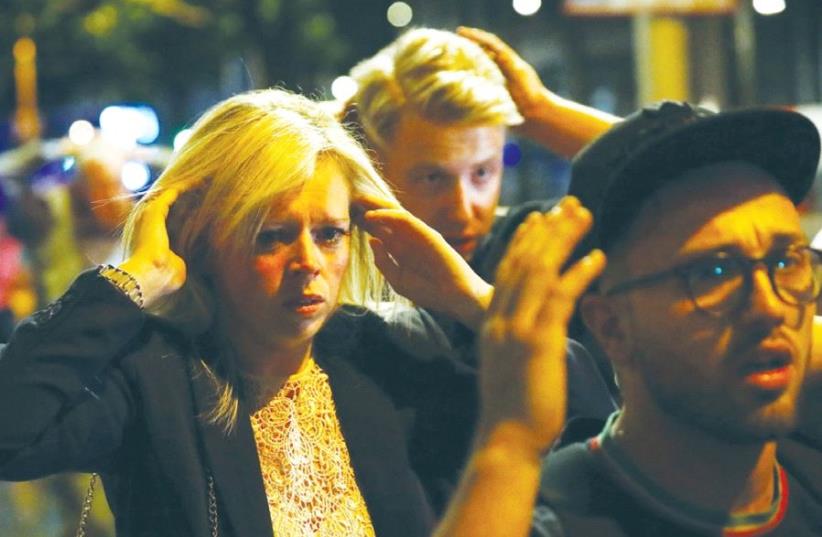 PEOPLE LEAVE the area of Saturday night’s terrorist attack near London Bridge with their arms raised to indicate they are not a danger.
(photo credit: REUTERS)
Advertisement
LONDON – “We cannot and must not pretend that things can continue as they are...Enough is enough,” said British Prime Minister Theresa May on Sunday, hours after terrorism struck England for the second time in just under two weeks.Seven people were killed and at least 48 wounded, including 21 in critical condition, when what are believed to have been Islamist extremists ran over pedestrians on London Bridge and then went on a stabbing rampage nearby on Saturday night.Less than two weeks earlier, a suicide bomber killed 22 people at a concert in Manchester by US singer Ariana Grande.In March, in a attack similar to Saturday’s, five people were killed when a man drove into pedestrians on Westminster Bridge in central London and stabbed a policeman.London police arrested 12 people in the Barking district of east London on Sunday in connection with the attack and raids were continuing there, the force said. A Reuters photographer saw another raid take place in nearby East Ham.May in her statements on Sunday added that the general election scheduled for June 8 would go ahead, saying: “This can never be allowed to disrupt the democratic process.”Eyewitnesses described scenes of total carnage and horror during the eight-minute attack Saturday night, as the terrorists rammed their van into a crowd on the bridge, exited the vehicle and proceeded to methodically embark on a stabbing rampage in the popular Borough Market, which is home to various restaurants and bars.
Trump tweets for his travel ban as drama unfolds in London (credit: REUTERS)
According to eyewitnesses, the attackers shouted “This is for Allah” as they ran into a number of restaurants and stabbed citizens at random.An eyewitness in the Mexican restaurant El Pastor told Sky News: “One man entered the restaurant armed with a knife about a foot long and stabbed a lady who was in the restaurant – maybe a waitress.” He also said that he and others in the restaurant “threw bottles and chairs at the man armed with a knife to try and stop him.”Writing in The Jewish Chronicle, StandWithUs UK director Tamir Oren, who was in the area when the attack took place, said: “Living in Israel most of my life I have, unfortunately, become used to hearing reports of car rammings and stabbing attacks... In my wildest dreams, I didn’t think that my friends’ last night as tourists in London would conclude with us looking at London Bridge filled with police cars as a terror attack ensued.”Home Secretary Amber Rudd said in a television interview Sunday the government was “confident about the fact that they [the terrorists] were radical Islamic terrorists.”London Mayor Sadiq Khan responded to the attacks, saying: “My message to Londoners and visitors to our great city is to be calm and vigilant. You will see an increased police presence today, including armed officers and uniformed officers. There is no reason to be alarmed by this.”Prime Minister Benjamin Netanyahu, meanwhile, said the terrorists who carried out the London attack “worship death” and “murder indiscriminately,” but that “they will not frighten us, they will not terrorize us, they will only harden our resolve to defeat them.”Speaking at a summit with the leaders of 15 African states in Monrovia, Liberia, Netanyahu opened his remarks by condemning the attack, sending his condolences to the British people and pledging “our commitment to fight this scourge that knows no boundaries.”Faith leaders across the UK condemned the attack.In a strongly worded statement, Harun Khan, secretary- general of the Muslim Council of Britain – an umbrella organization that represents more than 500 different organizations, mosques, charities and schools – said: “Muslims everywhere are outraged and disgusted at these cowards who once again have destroyed the lives of our fellow Britons.That this should happen in this month of Ramadan, when many Muslims were praying and fasting, only goes to show that these people respect neither life nor faith.”Chief Rabbi Ephraim Mirvis released a statement emphasizing the importance of the country remaining united, saying: “After Westminster and Manchester, we stood together defiant. Yet, it seems the terrorists believe that where they have previously failed to poison our communities with their destructive ideology of hatred and prejudice, they can succeed with still more bloodshed and murder. But we must not let them.”Writing on Facebook, the Archbishop of Canterbury, Justin Welby, wrote: “The terrorists want to divide us. They want to make us hate one another. They want to change our way of life. But just like we saw in Manchester, Londoners are responding with generosity and open hearts. With courage, resilience and determination.”Herb Keinon and Reuters contributed to this report.