Pew Research Center surveys paint a dark picture for the present – and future – of conventional democratic systems of government.

A protester holds a placard that reads "Macron terrorist" during a demonstration called by the French nationalist party "Les Patriotes" (The Patriots) against France's restrictions to fight the coronavirus disease (COVID-19) outbreak, on the "Droits de l'Homme" (human rights) esplanade at the Troca
(photo credit: REUTERS)
Advertisement

Many in the global public feel democracy is not working the way that it should – and this sentiment is growing.

According to an interactive essay by the Pew Research Center, a large majority in democratic countries believe that their nation’s political system has declined, governments no longer work for the benefit of the population, and that their own political systems need to be reformed – among other complaints and grievances about their democratic systems.

Among the data discovered in numerous surveys reviewed by Pew, one showed that the percentage of people who said their state government is ruled for the benefit of the broader population has starkly decreased since 2002. For instance, just 30% of Italians surveyed in 2019 felt the state is run for the “benefit of all” – a staggering drop from the 88% of Italians who felt this way in 2002. Almost half (46%) of Americans felt the same way in 2019, compared to 65% in 2002, while the rate of those who agreed with the sentiment in Germany declined by almost half, from 86% to 48%. 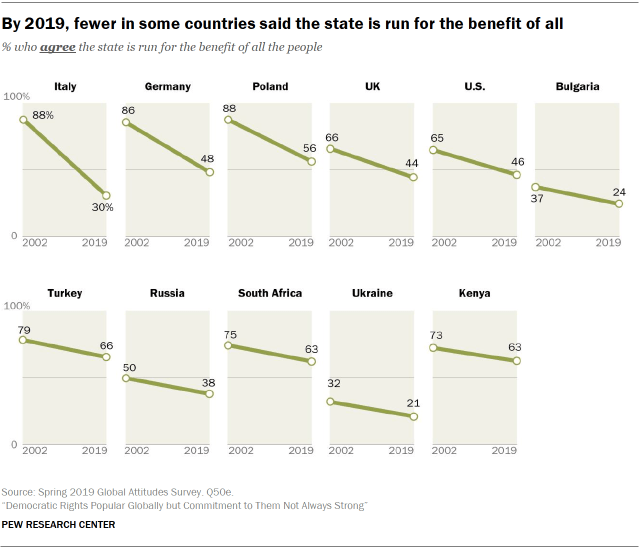 Major factors in dissatisfaction with democracies include economic struggle, complacency in governing and a feeling of individual rights being curtailed – such as freedom of speech – per a 2018 survey.

Much has changed since the surveys were conducted at the turn of the decade – 2020 brought along the largest pandemic in over a century and changed the rules of society around the globe. This was reflected in a spring 2021 Pew survey, which showed that in prominent democracies – such as the US, Italy, Spain, France, South Korea, Belgium and Japan – over three-fourths of the surveyed population believe their country’s political system needs to be significantly or completely reformed. Some 85% of Americans think changes need to be made, while 89% of those surveyed in Italy said the country’s political system needs major changes or complete reform – compared to 47% in Canada and just 24% in New Zealand.

A supporter of US President Donald Trump waves Trump and Confederate flags after making his way to the second floor of the US Capitol during the insurrection on January 6. (credit: MIKE THEILER/REUTERS)

The United States of America, long revered around the world as a beacon of freedom and democracy, has also lost some of its luster as the “shining city on a hill,” a classical phrase many American politicians use to describe the world’s most famous defender of freedom.

Of the 17 countries surveyed in a 2021 “Global Attitudes” survey, just one had over 30% of respondents say the US is a “good example for other democracies to follow,” with the median figure being 17% – Americans themselves being close to that, with just 19% agreeing with the statement. On average, 57% of respondents said America “used to be a good example but has not been in recent years,” while 23% said that America has never been a good example for other democratic nations.

While perhaps displeased and even jaded with their political systems, residents of conventional democracies have no intention of changing their system of rule. “Democracy is the worst form of government – except for all the others that have been tried,” as the UK’s Winston Churchill once famously said. In a 2017 Pew poll, three-fourths (78%) of respondents said that representative democracy was an effective method of governance, compared to just a quarter (26%) who believe rule by a “strong leader” was a good political system and 24% saying that military rule was a good system. 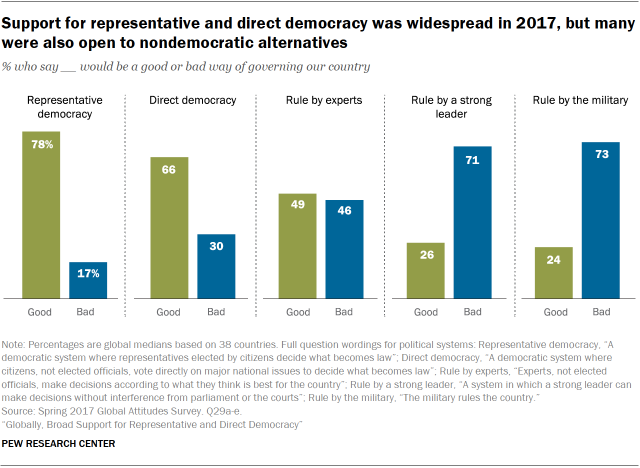 Interestingly, however, respondents were split when asked about a “rule by experts” political system, known as a technocracy. Almost half (49%) of respondents felt this system would be good, compared to 46% who said it would be bad. The former Soviet Union was known as something of a technocracy, though freedoms were severely limited in the soviet state, while the nation that most closely resembles a “rule by experts” system today is China – which has had its own lack of freedoms and human rights record closely scrutinized and widely criticized.

The idea of direct democracy – where citizens vote directly on what does or does not become law – is also increasingly popular around the globe, with two-thirds (66%) of respondents in the 2017 survey saying it was an effective method of government, compared with just 30% who called it inferior.