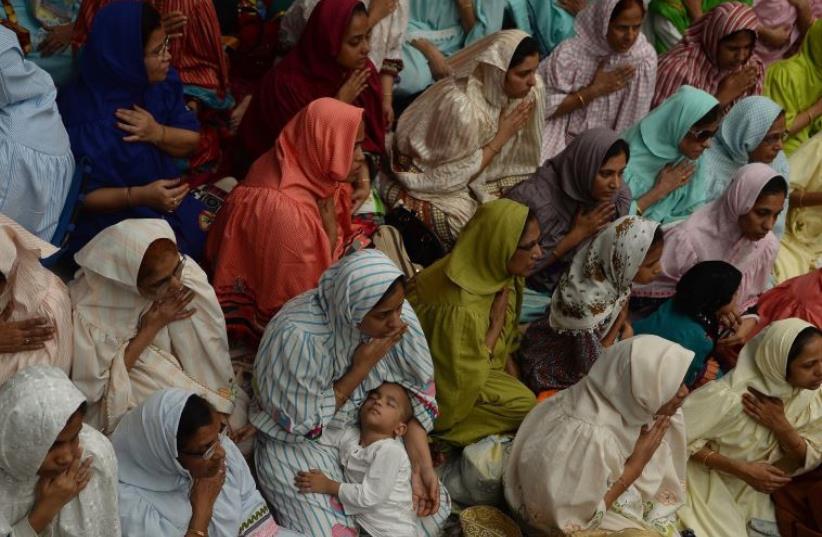 Indian Muslim women at a mosque in Mumbai [Illustrative]
(photo credit: PUNIT PARANJPE/AFP)
Advertisement
As Europe is engulfed in a debate over religious freedom as Middle East migrants stream into the continent, the matter has traversed to the social media realm in calls for emojis illustrating Islamic motifs.Rayouf Alhumedhi, a 15-year-old Saudi national living in Germay, sent a proposal for the design of digital hijab icons to the non-profit emoji developer the Unicode Consortium, according to the BBC.The idea was given backing by Reddit co-founder, Alexis Ohanian and the emoji will be available in 2017 if approved.The prospect appears as the burka, the traditional Muslim covering, becomes a greater cause of conflict within European society.The debate focuses on religious freedom, secularism, terror fears and female equality.Alhumedhi told the BBC that she noticed during a group chat with friends that there was no emoji to represent her likeness - a headscarf-covered woman. Speaking to the BBC, Alhumedhi said "In this day and age, representation is extremely important."She further said that "emojis are everywhere."The 15-year-old said that there are many Muslim women who wear the headscarf and that it is great to see a representation, even if it seems like something trivial.While the launch of such emojis would likely face backlash from people who believe head-coverings represent the oppression of women, it could also receive criticism as traditional Islamic culture prohibits the likeness of living beings in art. This proposition comes at a time where several issues surrounding the Islamic garb have become more prominent in Europe, especially the burkini. The burkini has sparked controversy all over Europe with 15 French towns having banned the swimsuits after heightened tensions after terror attacks in the country.