Israelis race to save lives in Haiti

By E.B. Solomont
JANUARY 17, 2010 13:20
Earthquake GEN 224.88
(photo credit: )
Advertisement
PORT-AU-PRINCE, Haiti - Israeli rescue and medical teams quickly joined the international effort on Saturday to locate and extricate survivors and provide aid to the millions of Haitians rendered helpless by last Tuesday's devastating earthquake.Haitian officials are speculating that the death toll may be anywhere from 50,000 to 200,000, and vast numbers of bodies are being buried in mass graves to try to reduce the spread of disease.

A third of Haiti's 9 million people are believed to require aid, with 300,000 living on the streets here in the capital alone. The UN has described the disaster as the most challenging it has faced in terms of resources needed. A strongly felt aftershock, measured at 4.5 on the Richter scale, further complicated rescue efforts on Saturday, forcing a brief suspension of relief activities.A ZAKA rescue unit, deployed at a collapsed multi-story university building, managed to extricate eight students from the rubble over the weekend - underlining the conviction among the Israeli rescue teams that it is not too late to save lives.The Israeli delegation, which arrived on Friday, has established a headquarters near the airport, and swiftly set up its field hospital, unloading dozens of truckloads of medical and logistical equipment. The IDF's Medical and Rescue Team immediately began work, with two teams from the Oketz canine unit pressed into action, including at the UN headquarters in the capital where there was hope of locating and extricating survivors.Meanwhile, the last Israeli missing in the quake, Sharona Elsaieh, daughter of peace activist Abie Nathan, contacted her family in Israel on Friday. Elsaieh, who has been living on the island for several years, told her family she was in good condition.At Jimani Hospital, just across the border in the Dominican Republic, the extent of the tragedy is overpowering. Hundreds of Haiti's walking wounded are arriving in an endless stream, needing everything from amputations to abdominal surgery.Inside Haiti, at the capital's General Hospital, patients lie on dirty mattresses on the floor while doctors do their best to apply splints - made from cardboard boxes - to broken limbs. Hopelessly overwhelmed medics do their best to tend to burned and bleeding gashes amid a stench of sweat and infection, with flies buzzing everywhere. Bodies are stacked outside the building in piles. 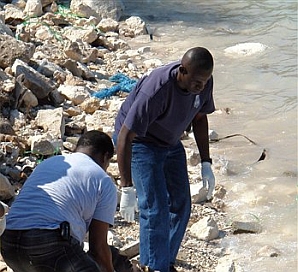