Eleven candidates will be narrowed to two for final May runoff 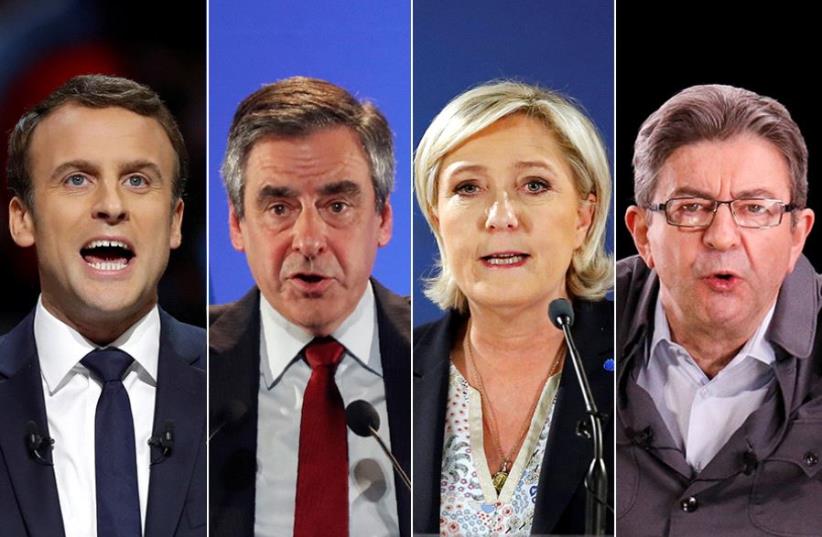 Macron, Fillon, Le Pen and Mélenchon
(photo credit: REUTERS)
Advertisement
TOULOUSE – Under tight security, the people of France will begin voting for a new president on Sunday after debating for more than a year what the future of their country should look like.The options before them offer starkly different visions and reveal deep fault lines within French society over issues of race, nationalism and their country’s role in forging an inclusive and united Europe. Four candidates lead the pack – a democratic socialist, a far-right nativist, an establishment republican and a young, independent newcomer.Those candidates – Jean-Luc Mélenchon, Marine Le Pen, François Fillon and Emmanuel Macron, respectively – are all polling within points of one another, set to garner roughly 20-24% of likely voters. The top two candidates will proceed to a runoff scheduled for May 7.The race is so tight that, unlike in previous years, some local news channels are warning viewers not to expect an announcement of results promptly at 8 p.m., when the polls close.
Nervousness over 2017 French presidential elections as investors take stock of recent polls showing a tightening race between candidates Le Pen, Macron and Melenchon (REUTERS)
Surveying and campaigning ended two days ago in accordance with French law. But events may still affect the results. A terrorist attack on Thursday night against law enforcement on the Champs Elysees, the capital’s main thoroughfare, was claimed by Islamic State, in an apparent attempt to influence voters jittery over security after a series of devastating attacks in recent years.Le Pen (National Front) and Macron (En Marche!) are slightly ahead of their two rivals. Should they advance to the second round, it will be the first time under the Fifth Republic (1958–present) in which neither of the two major parties – the Socialist Party and the Republicans and its predecessors on the center-right – is represented in the final leg of the race.And that would be just one of several historic firsts in a race featuring candidates with extreme differences. Le Pen will have taken her party into the mainstream after it for years faced accusations of racism, antisemitism and xenophobia. The success of her brand of hyper-nationalism – fueled by fears of immigration from Muslim lands and increasing terrorist threats against the country from within – has been compared to the unexpected political rise of Donald Trump in the United States.Trump weighed in on the campaign on Friday, suggesting that the previous night’s attack in Paris would “probably help” his populist counterpart.The nation may alternatively select its youngest-ever president in Macron, 39, who has never previously run for elected office. The former finance minister ran a center- left campaign and represents the most pro-European candidate in the race.Macron’s rise has been credited in part to the precipitous fall from grace of Fillon (Republicans), who has been mired in scandal over public payments made to his family members. Fillon bled significant support as a formal investigation was launched into the scheme, but he has perhaps maintained enough support from moderate voters who consider Macron too young and inexperienced an alternative.And Mélenchon, who founded a communist party not long ago, has surged in the polls in recent weeks, based in large part on young supporters. Victory for Mélenchon would make for an upset, likely at the expense of Macron, who is relying on this constituency to advance into the second round.Polling in the election reveals a relatively even divide between the four among likely voters, but there is a caveat: Up to a third have not yet decided how they will cast their ballots. Widespread indecision has confounded French pundits and adds to uncertainty entering the first round on Sunday.The election is considered a referendum in Western Europe’s second-most populous nation on whether the EU project can survive a wave of populism crashing ashore, after the earthquake that was America’s 2016 presidential election.Le Pen, who was seen in Trump Tower in New York during the US presidential transition period and who has accepted campaign funds from Russia, appears to have the support of both. In January, a mutual friend of Trump and Le Pen, Italian businessman George Lombardi, described France’s election as a critical test.“We call it the Normandy landing,” he said.