Boris Johnson speculated about why a bust of Britain's wartime leader Winston Churchill had been removed from the Oval Office. 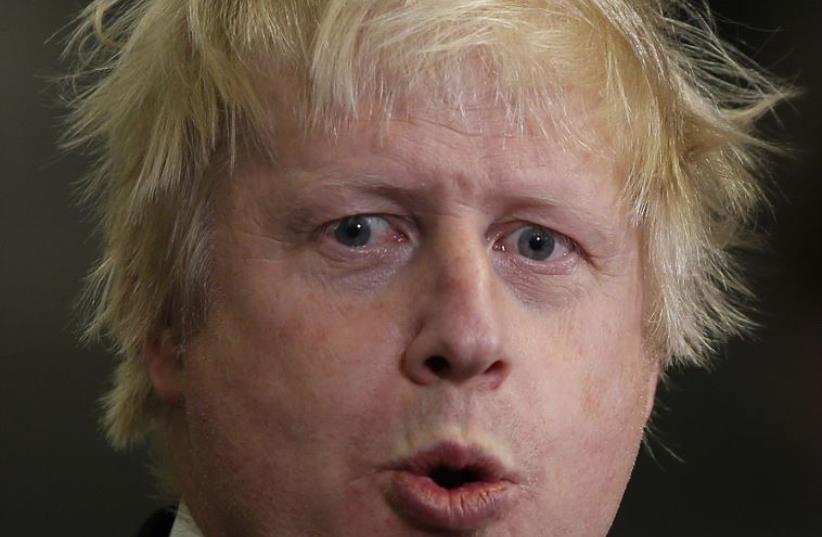 London Mayor Boris Johnson
(photo credit: REUTERS)
Advertisement
London Mayor Boris Johnson, figurehead of the "Out" campaign ahead of Britain's referendum on European Union membership, was accused on Friday of demeaning the EU debate with a comment about US President Barack Obama's Kenyan heritage.The "In" campaign and lawmakers attacked the Conservative mayor over a passage in an opinion article he wrote in the Sun newspaper criticizing Obama, who is visiting Britain and has urged Britons to vote to remain in the bloc. Johnson speculated about why a bust of Britain's wartime leader Winston Churchill had been removed from the Oval Office in the early days of Obama's presidency in 2009."Some said it was a snub to Britain. Some said it was a symbol of the part-Kenyan president's ancestral dislike of the British Empire, of which Churchill had been such a fervent defender," wrote Johnson.Obama's father was Kenyan but the president does not hold Kenyan citizenship and has never lived in Kenya.Johnson is not the first political opponent of Obama to try to make capital out of his family background. US Republicans have done so for years, and the front-runner to win the party's nomination for this year's presidential race, Donald Trump, has been doing so during the campaign.The Britain Stronger In Europe campaign said in a statement that to suggest Obama was driven by an ancestral dislike of the British Empire was demeaning to the debate about EU membership."Using that type of language does not reflect Britain's standing in the world or the country we aspire to be," said Stephen Wall, former British Permanent Representative to the European Union, speaking for the official "In" camp.The White House declined to comment.Johnson responded to the criticism by saying he was "a big fan" of Obama and had been one of the first people to back him.
In a statement sent by a spokesman, Johnson said the issue was the "weird paradox" of the president of a country that jealously guards its sovereignty urging Britain to surrender some of it by embedding itself further in the EU.The ruling Conservatives are split over the EU issue and one of those who criticized Johnson's article was Conservative lawmaker Nicholas Soames, Churchill's grandson, who described it as "appalling" and "wrong on almost everything.""Inconceivable WSC (Churchill) would not have welcomed President's views," Soames said on Twitter. Johnson is considered the frontrunner to succeed Prime Minister David Cameron, who is campaigning for an "In" vote, if "Out" wins the referendum.Chuka Umunna, a lawmaker the opposition Labor Party, tweeted that Johnson's comment about Obama showed he was "totally unfit" to be premier.John McDonnell, Labor's finance policy chief, also tweeted about it: "Mask slips again. Boris part-Kenyan Obama comment is yet another example of dog-whistle racism from senior Tories (Conservatives). He should withdraw it."Referring to "dog-whistle" politics, McDonnell was suggesting that while Johnson's comment was not overtly racist it contained an underlying hint of racism that some readers would pick up.Nigel Farage, leader of virulently anti-EU party UKIP, made similar suggestions about Obama to British media. "I think Obama bears a bit of a grudge against this country," Farage told the BBC, citing the president's family background.Farage is a divisive figure in British politics and UKIP is frequently accused of harboring racists, which he denies.