By ASSOCIATED PRESS
APRIL 12, 2010 21:38
Chuvanov 311
(photo credit: ASSOCIATED PRESS)
Advertisement
MOSCOW — A judge who sentenced neo-Nazis to prison for hate killings was gunned down Monday, marking the latest murder in a surge of violence against activists and officials opposed to Russian nationalists.Moscow City Court judge Eduard Chuvashov was shot contract-style in the stairwell of his apartment building in central Moscow, Russia's top investigative body said.The murderer used a silencer and left no shells, but investigators obtained footage from surveillance cameras showing a tall Slavic man, about 30-years-old, coming out of Chuvashov's apartment building shortly after the killing, it said."We have definitive leads," investigator Pyotr Titov said in televised remarks.A leading rights group pointed the finger at a far-right ultranationalist group with alleged ties to Kremlin-backed youth movements, saying it may have links to the murder and incited hatred for Chuvashov on the Internet. A nationalist leader denied the accusations. 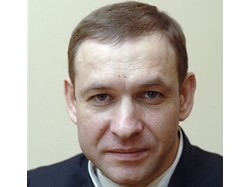 Chuvashov, 47, presided over several high-profile cases that involved hate killings committed by neo-Nazis and skinheads.In February, Chuvashov presided over the trial of the White Wolves, a gang of mostly teenaged skinheads who kicked and stabbed their victims to death, often videotaping the attacks and posting them online. They were convicted by a jury of the killings of six Central Asian people and Chuvashov sentenced them to up to 23 years in jail.Russia has experienced a surge of xenophobia and racially-motivated assaults in the years after the Soviet collapse, and the number of neo-Nazi groups has mushroomed.As the nation struggles through an ongoing economic meltdown, nationalist groups have targeted dark-skinned migrants from ex-Soviet Central Asian nations and Russia's own North Caucasus region, accusing them of stealing jobs from ethnic Russians.Chuvashov began receiving threats during the trial, a Moscow-based hate crime monitoring group, Sova, said.The group's deputy director, Galina Kozhevnikova, said a leader ofultranationalist group Russky Obraz wrote in his blog in January thatChuvashov advocated the killing of ethnic Russians.Alexander Baranovsky, who allegedly wrote the post, said that"nationalists are a very useful bogey man that can be accused of anybig crime these days.""Nationalists never had any complaints about Chuvashov; the way he judged the (White Wolves) trial was normal," Baranovsky said.Russian anti-racist activists and rights groups also claimed thatRussky Obraz had ties with Young Russia, one of severalgovernment-funded groups known for street rallies and harassment ofKremlin political opponents.Young Russia and its leader, a member of the Russian parliament, has denied such links.So far this year, 12 people have been killed and more than 70 woundedin racist attacks, the Sova center said. In 2009, a total of 71 peoplewere killed and 333 wounded, it said.Sova's Kozhevnikova said that Russian far-right nationalists areincreasingly targeting officials and activists who oppose violentnationalism. "They are facing more and more danger these days," shetold the AP.
Advertisement
Subscribe for our daily newsletter