Oren: I was flagrantly misquoted

By HILARY LEILA KRIEGER , JERUSALEM POST CORRESPON
MARCH 18, 2010 02:56
Michael Oren Ariel Jerozolimski 311
(photo credit: Ariel Jerozolimski)
Advertisement
WASHINGTON – Michael Oren, Israel’s ambassador to the United States, is flatly denying reports that he had labeled the current US-Israel row the greatest crisis between the two countries in 35 years.“I was flagrantly misquoted about remarks I made in a confidential briefing this past Saturday,” Oren said in a statement issued Tuesday afternoon, after the report first surfaced in the Hebrew media Monday morning.“Recent events do not – I repeat – do not represent the lowest point in the relations between Israel and the United States,” continued Oren, a historian by background and author of books on US and Israeli history.“Though we differ on certain issues, our discussions are being conducted in an atmosphere of cooperation as befitting long-standing relations between allies,” he said. “I am confident that we will overcome these differences shortly.”The US leveled some of its harshest criticism at Israel in the past week after the Interior Ministry approved 1,600 new housing units in east Jerusalem during US Vice President Joe Biden’s trip to Israel. Biden condemned the move, and US Secretary of State Hillary Clinton later called it “insulting” to the US and questioned Israel’s commitment to its relationship with America.The embassy initially declined to discuss Oren’s comments, which were attributed to Oren during a conference call he held with consuls-general, citing confidentially for internal diplomatic conversations. 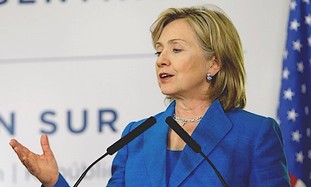 But the comments quickly circulated, and were even cited by an American reporter at a press conference with Clinton Tuesday hours before Oren’s denial was sent out.Clinton, too, dismissed the assertion that relations were at a decades-long nadir.“I don’t buy that,” she said. “I’ve been around; not that long, but a long time. We have an absolute commitment to Israel’s security. We have a close, unshakable bond between the United States and Israel and between the American Israeli people.
“We share common values and a commitment to a democratic futurefor the world and we are both committed to a two-state solution.”But, she added, “that doesn’t mean that we’re [always] going to agree.We don’t agree with any of our international partners on everything.”Though Israeli officials still wouldn’t go into detail about thecontent of Saturday’s conversation Wednesday, one did acknowledge thatOren used the word “flap” or “crisis” in discussing the recent tensions.
Advertisement
Subscribe for our daily newsletter