By ASSOCIATED PRESS
SEPTEMBER 2, 2010 11:41
discovery channel
(photo credit: AP)
Advertisement
A man who railed against the Discovery Channel's environmental programming for years burst into the company's headquarters with at least one explosive device strapped to his body Wednesday and took three people hostage at gunpoint before police shot him to death, officials said.The hostages — two Discovery Communications employees and a security guard — were unhurt after the four-hour standoff. Montgomery County Police Chief Thomas Manger said tactical officers moved in after officers monitoring the man on building security cameras saw him pull out a handgun and point it at a hostage.An explosive device on the gunman's body detonated when police shot him, Manger said. Police were trying to determine whether two boxes and two backpacks the gunman had also contained explosives.A law enforcement official speaking on condition of anonymity because the investigation was ongoing said authorities had identified James J. Lee as the likely suspect. Police had not released the gunman's identity. 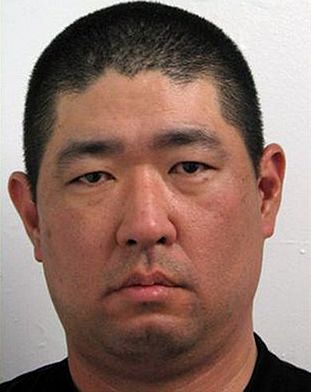 County Police and firefighters Wednesday night looked at a laptop screen that showed an image of a body lying face-up, surrounded by blood. Authorities also sent in a robot to disarm the explosive on the gunman's body. Police Capt. Paul Starks said the suspect had shot a gun at least once. He also said police believe the suspect was acting alone but are investigating all possibilities.NBC News reported that after its producers called Discovery's general number, a man identifying himself as James J. Lee got on the phone and said he had a gun and several bombs."I have several bombs strapped to my body ready to go off. I have a device that if I drop it, if I drop it, it will ... explode," the man told NBC.He said he built the bombs in about three weeks. "I did a lot of research. I had to experiment," he said.Manger said the suspect held the hostages in the lobby area of the first floor. He said police spent several hours negotiating with the armed man after he entered the suburban Washington building about 1 p.m. (1700 GMT). None of the 1,900 people who work in the building were hurt, and most made it out before the standoff ended.Lee was convicted of disorderly conduct for a protest he organized outside Discovery's offices in February 2008. According to court records, he paid homeless people to carry signs and set off a scramble when he threw fistfuls of cash into the air, calling it "just trash."Lee served two weeks in jail after his arrest during which doctors evaluated his competency to stand trial. County State's Attorney John McCarthy said Lee was ordered to stay 500 feet (150 meters) away from Discovery headquarters as part of his probation, which ended two weeks ago. A magistrate ordered a doctor's evaluation, but the result was not immediately available Wednesday."The Discovery Channel produces many so-called 'Environmental Programs' supposedly there to save the planet," Lee said in an ad he took out in a Washington newspaper to promote the protest. "But the truth is things are getting WORSE! Their programs are causing more harm than good."In court and online, Lee faulted the Discovery Channel for shows as varied as "Future Weapons," ''It Takes a Thief" and "Planet Green."A lengthy posting that could be seen Wednesday on a website registered to Lee said Discovery and its affiliates should stop "encouraging the birth of any more parasitic human infants," a possible reference to shows like "Kate Plus 8" and "19 Kids and Counting." Instead, he said, the network should air "programs encouraging human sterilization and infertility."Discovery Communications Inc. operates U.S. cable and satellite networks including The Discovery Channel, TLC and Animal Planet. Discovery shows include "Cash Cab" and "Man vs. Wild," and TLC airs "American Chopper" and "Kate Plus 8."David Leavy, Discovery's executive vice president for corporate affairs, said all employees had been accounted for. "We're relieved that it ended without any harm to our employees," he said.Discovery officials are familiar with the suspect and his past protest at the building, Leavy said.At Lee's trial, he said he began working to save the planet after being laid off from his job in San Diego.He said he was inspired by "Ishmael," a novel by environmentalist Daniel Quinn, and by former Vice President Al Gore's documentary "An Inconvenient Truth."