By SARA MILLER
International space station 370
(photo credit: NASA)
Advertisement
An internet security specialist says that Stuxnet, the computer malware that targeted Iran's nuclear facilities in 2010 and widely attributed to Israel and the US, has spiraled out of control and attacked a Russian nuclear plant and the International Space Station. 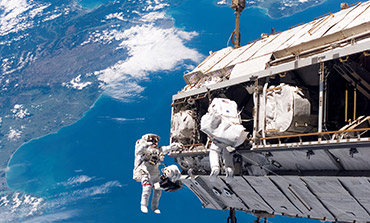 The virus "badly infected" the network of the Russian plant plant, Eugene Kaspersky, the head of the Kaspersky Lab internet security company, told reporters at a conference in Canberra, Australia last week. Kaspersky said he had been tipped off about the leak by a technician at the Russian plant. "[T]heir nuclear plant network which was disconnected from the internet ... was badly infected by Stuxnet," Kaspersky was quoted as saying by Australia's SC Magazine.Kaspersky also told his audience that the malware was later transported by Russian astronauts to the space station on a USB stick. The sophisticated Stuxnet worm was estimated to have set Iran’s nuclear program back by two years, after it was discovered in June 2010 to have attacked computers at the Islamic Republic's plant in Natanz.