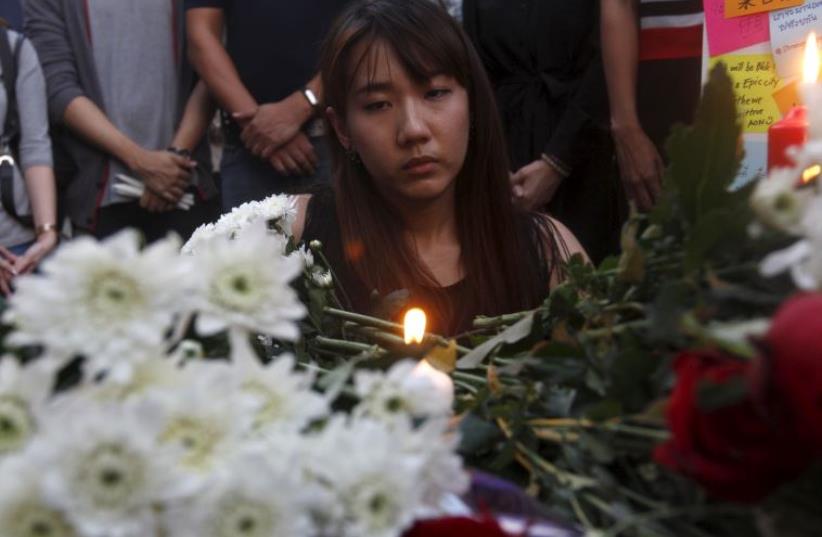 A woman lights a candle at the Erawan shrine, the site of Monday's deadly blast, in central Bangkok
(photo credit: REUTERS)
Advertisement
Thai authorities said on Wednesday they were looking for accomplices of the chief suspect for the Bangkok shrine bomb blast that killed 22 people, a man who was captured on closed-circuit television (CCTV) dumping a backpack and walking away."We suspect he is the bomber," national police spokesman Prawut Thawornsiri said, referring to the man in a yellow T-shirt in a grainy video that has gone viral on social media.
Thai police release still photos of bomb attack suspect
"We are also looking for other suspects in connection with the blast. These types of attacks are not usually planned by one person alone," he added.The government said Monday evening's attack at the popular Erawan shrine in the heart of Bangkok was aimed at wrecking the economy, which depends heavily on tourism.
Bangkok Jewish community on high alert, but still maintaining a brave face
No one has claimed responsibility for the blast, which killed 22 people - nearly half of them foreigners from several Asian countries - and wounded more than 120.Deputy police chief Jaktip Chaijinda said that, based on the footage, investigators "believe the man's physical appearance resembles more that of a foreigner than a Thai."Jangling nerves in the city on Tuesday, a small explosive was thrown from a bridge towards a river pier, sending a plume of water into the air, but no one was hurt.A spokesman for the government, Werachon Sukhontapatipak, said there were "patterns" linking the two bombs in that both used TNT but no direct connection had been established as yet.Police Major General Pornchai Suteerakune, commander of the Institute of Forensic Medicine, said the bodies of almost all the dead at the shrine were wounded by silver ball bearings that were packed into the bomb.The shrine, a blood-spattered scene of charred motorbikes and debris after the blast, was reopened on Wednesday.The footage of the young man with shaggy dark hair shows him entering the shrine compound with a backpack on, sitting down against a railing and then slipping out of the bag's straps.He then stands up and walks out apparently holding a mobile phone, leaving the bag by the fence as tourists mill about.Police have not ruled out any group, including elements opposed to the military government, for the attack though they say it did not match the tactics of Muslim insurgents in the south or 'red shirt' supporters of the previous administration."The attack did not bear the hallmarks of either southern Muslim separatists or red-shirt militants," said Angel Rabasa, an expert on Islamist militancy at the RAND Corporation."Both groups have carried out terrorist attacks in the past, but not on this scale in terms of loss of life."He said the attack could be the work of Islamic State, which has been expanding its reach in Southeast Asia, or an al Qaeda-related or independent jihadist group. However, such groups usually claim responsibility for their attacks.Police said they were also considering the possibility that ethnic Uighurs were behind the bombing.Thailand forcibly returned 109 Uighurs to China last month.Hundreds, possibly thousands, of members of the Turkic-speaking and largely Muslim minority have fled unrest in China's western Xinjiang region, where hundreds of people have been killed, prompting a crackdown by Chinese authorities. Many Uighurs have traveled through Southeast Asia to Turkey.The blast comes at a sensitive time for Thailand, which has been riven for a decade by a sometimes-violent struggle for power between political factions in Bangkok.A parliament hand-picked by a junta that seized power in a 2014 coup is due to vote on a draft constitution next month. Critics say the draft is undemocratic and intended to help the army secure power and curb the influence of elected politicians.