The stalemate in Turkish-Israeli relations

How the rise of Turkey’s JDP party has reshaped Ankara’s foreign policy and its ties to Jerusalem.

By BANU ELIGUR
Pro-Palestinian activists with Turkish flags 370
(photo credit: REUTERS)
Advertisement
ANKARA – Last July, Prime Minister Binyamin Netanyahu met with a group of Turkish journalists in an attempt to restore the broken Israeli-Turkish relations in the aftermath of the May 2010 flotilla incident during which nine Turkish citizens died, while dozens were injured as well as several Israeli soldiers. Some analysts in both Israel and the US have emphasized Israel’s growing isolation in the Middle East particularly in the post-Arab Spring period and urged the Israeli government to find an accommodation with Turkey. They suggest that Israel’s declaration of a clear apology to Turkey for the IDF’s killing of those Turkish citizens would be a good start to mend the bilateral relations.Yet, Israel’s apology is not likely to resolve the crisis between the former allies. And one needs to analyze the deep causes of the stalemate in the Turkish-Israeli relations, namely the Justice and Development Party’s (JDP) Islamist foreign policy toward the Middle East and the fact that the 2003 Iraq war ended the sources of the Turkish-Israeli strategic partnership.The JDP, which has roots in political Islam, became the party of the government by securing 34.3 percent of the popular vote in the 2002 general elections. The party further increased its vote share to 46.6% in the 2007 general elections, and won the presidency following the elections. The JDP further increased its vote share to 49.8% in the 2011 general elections. The party has successfully mobilized against the secular-democratic state, and has reformulated Turkish foreign policy toward the Middle East according to its Islamist perception of brotherhood among Islamic countries.In the pre-Arab Spring period, the JDP government formed close political and economic relations with political Islamist regimes such as those in Iran, Sudan, Saudi Arabia, Hamas and Hezbollah. The JDP also formed close relations with Syria — Iran’s main ally and until recently a close ally of Hamas. Islamism in Turkish foreign policy clearly manifested itself in the currently strained Turkish-Israeli relations, as well as Turkey’s pro-Hamas stance and its pro-Iranian policy on Iran’s nuclear program.UNDER THE JDP government, Turkey abandoned its formerly balanced Middle East policy of not involving itself as a party of conflict in regional problems and pursuing a clear stance against terrorist groups. Instead, the country started to follow an Islamist foreign policy, which culminated in Ankara pursuing a common foreign policy with the region’s radical forces and Israel’s competitors — Iran, Syria, Hamas and Hezbollah.The JDP government, being the defending voice of the region’s radical forces against Israel and the West, aimed at making Turkey a regional leader, while galvanizing electoral support for the party by evoking Islamist sentiments among the conservative/Islamic Turkish electorate.Another source of contention between Turkey and Israel was the resurgence of the Kurdish separatist PKK (Kurdistan Workers’ Party) terrorist group in Turkey in the aftermath of the Iraq war. One of the major reasons for Turkey’s formation of an alliance with Israel in the 1990s was to counterbalance Syria, Iraq and Iran, which were PKK supporters.Ankara, by signing a number of military agreements with Israel, purchased advanced military equipment that the West was reluctant to sell due to allegations of human rights violations in Turkey’s war against PKK terrorism. The countries also collaborated on intelligence and counterterrorism. Yet, in the aftermath of the Iraq war, Turkey, along with its former enemies Syria and Iran, focused on preventing the creation of an autonomous or independent Kurdish state in northern Iraq.The three countries have Kurdish-populated areas in their territories, which might result in irredentist claims of Kurdish separatism. The JDP government formed close political and economic relations with Syria and Iran and, eventually, with Iraq and the Kurdish regional government to counter the threat of PKK terrorism.THE JDP, particularly by its second term (2007—2011) successfully mobilized against the secular-democratic state by exerting its power in executive, legislative and judiciary branches. Drastic changes in Turkish domestic politics favoring the Islamist movement, while weakening the military’s power, have had a crucial impact on the country’s foreign policy making. The JDP government successfully utilized EU reform packages intended to democratize the country to further strengthen the Islamist movement, while weakening the military’s power in Turkish politics.Moreover, particularly since 2008, prominent secular JDP critics have been continuously arrested as suspects of the Ergenekon terror organization. The Ergenekon lawsuit is based on an allegation that a number of nationalist-oriented crime bosses, along with intelligence officers, retired generals, military officers, journalists, university presidents, professors, politicians, businessmen, civil society association members and artists tried to initiate a coup against the JDP government by resorting to violence.Similar to the Ergenekon case, there is also the Sledgehammer (Balyoz) lawsuit, which is based on an allegation that current and retired generals and military officers tried to initiate a violent coup against the JDP government. The Sledgehammer case was later combined with a branch of the Ergenekon lawsuit. The Human Rights Watch, The Washington Post and a number of Turkish professors of computer engineering reported that much of the evidence in both cases looked flimsy and fabricated. However, in September 2012, a Turkish court sentenced over 300 current and retired generals and military officers to prison terms of between 16 and 20 years in the Sledgehammer case.The JDP government successfully utilized the Ergenekon and Sledgehammer cases to mobilize against the secular military. Moreover, the JDP has dominated Turkish foreign policy making.The JDP government, while forming close political and economic relations with Israel’s competitors, made the Gaza issue, the Arab- Israeli peace process, and the Iranian nuclear program a top priority of Turkey’s foreign policy agenda. The JDP cadre calculated that if Turkey brought a solution to the Middle East peace process and the Iranian nuclear issue favoring Israel’s competitors, this would increase Turkey’s power and prestige in the Muslim Middle East. For this reason, the JDP has been pursuing a strategy of isolating Israel in the region as a means of putting pressure on it. 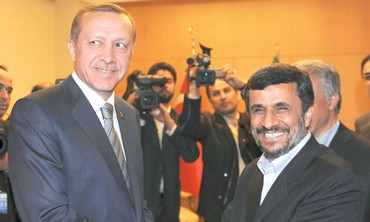 THE MAJOR source of contention between Turkey and Israel with respect to the Palestinian problem is that Prime Minister Recep Tayyip Erdogan does not regard Hamas as a terrorist organization; instead, he calls it a “political party,” which came to power democratically through elections. He also criticizes Israel and the West for not accepting Hamas as a party along with the Palestinian Authority in the Palestinian-Israeli peace process, even if Hamas does not renounce violence and continues not to recognize Israel’s existence.In August 2008, Iranian President Mahmoud Ahmadinejad, who calls for the destruction of Israel and denies the Holocaust, paid his first visit to Turkey after he came to power in 2005. And in November 2008, Turkey and Syria announced that they would send humanitarian assistance to the Gaza Strip, and put pressure on Israel to lift the blockade of Gaza. In order to prevent the smuggling of weapons and fighters to Hamas and other anti-Israel militants, Israel and Egypt imposed a blockade on Gaza in 2007 after Hamas violently seized control.Israel’s military strike against Gaza, Operation Cast Lead, in the winter of 2009 became a turning point in Turkish-Israeli relations. It is important to note the Turkish- Iranian cooperation in the form of highlevel exchanges during the Gaza war. The JDP government involved Turkish Islamist civil society associations, the Islamist media, and the state-owned TRT-1 (Turkish Radio and Television) television channel as actors in its foreign policy making by cultivating anti-Jewish public opinion in Turkey. Statements of Erdogan, his government’s policies and anti-Semitic slogans during the Islamist mass demonstrations were successful in creating anti-Jewish sentiments among the Turkish public.At the World Economic Forum meeting in Davos in January 2009, Erdogan further escalated tension between Turkey and Israel. And in October 2009, Turkey excluded Israel from the Anatolian Eagle military exercise, and announced that it would expand the scope of the military exercise with Syria. Shortly after this declaration, Erdogan visited Tehran and called Ahmadinejad “our friend,” while downplaying the Western fears that Iran wants to build an atomic bomb as “gossip.”Meanwhile, Deputy Foreign Minister Danny Ayalon’s undiplomatic attitude toward the Turkish ambassador to Israel further alienated the Turkish public from Israel and only benefited the JDP government, which sought to maintain the tension with Israel.YET, THE most intense crisis between Turkey and Israel occurred during the flotilla incident in May 2010. The JDP government successfully utilized the Islamist civil society association the Foundation for Human Rights and Freedoms and Humanitarian Relief, organizer of the six-ship flotilla, and Turkish Islamists as actors in its ambitious Islamist foreign policy goal of ending the Gaza blockade and ending the strategic partnership with Israel by making Turkey a party of conflict with Israel. Prior to this incident, there had never been a violent clash between the two countries.In the aftermath of the incident, Turkey recalled its ambassador from Israel and demanded the end of the Gaza blockade as a condition for restoring full diplomatic relations with Israel; a public apology and payment of reparations by Israel; and an international investigation into the Israeli flotilla operation. Turkey also declared that it cancelled military exercises with Israel, which were already not in operation since 2009, and closed down its airspace and military airports to Israel. It should be noted that the UN’s Palmer Commission report found that Israel acted within its legal rights in stopping the flotilla. In response to the Turkish demands, Israel agreed to express regret for the flotilla incident and pay reparations, but refused to lift the blockade.Meanwhile, the JDP government maintained its pro-Iranian stance. In June 2010, Turkey vetoed a fourth round of UN sanctions against Iran. Moreover, following a revision of the National Security Policy Paper in August 2010, Iran, which was listed as a primary external threat to Turkey, is no longer defined as a threat. Even though in September 2011 Turkey agreed to have in its territory a missile shield to defend Europe against a potential Iranian missile attack, around the same time Turkey expelled the Israeli ambassador.Additionally, Turkish Foreign Minister Ahmet Davutoglu stated in October 2011 that Turkey had the right to annul the radar system whenever it wanted. He also later declared that Turkey firmly opposed any military strike on Iran. 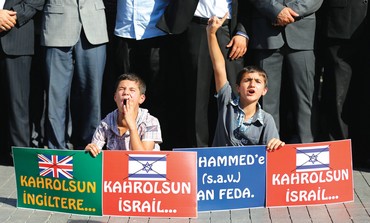