A threat also remained from Northern Irish militants who want to destabilize the peace deal in the British province established in 1998, it said. 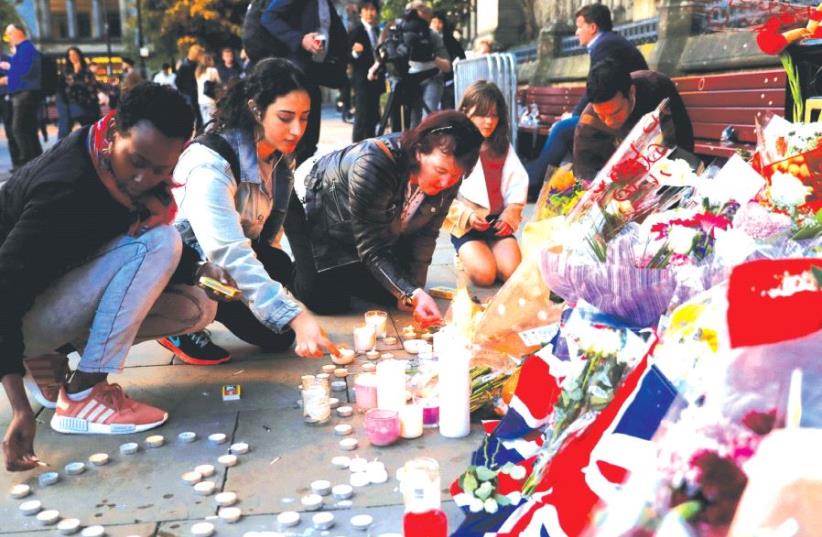 Women light candles for the victims of the Manchester Arena attack last month
(photo credit: REUTERS)
Advertisement
Britain said on Tuesday it would create a new homeland security headquarters as part of plans to improve its response to the "major threat" from terrorism, saying a successful chemical, biological or nuclear was likely by the end of the decade.

In its Integrated Review, which lays out the country's post-Brexit policy priorities, the government said Britain faced a significant threat to its citizens and interests, mainly from Islamist terrorism, but also from the far-right and to a lesser extent the far-left and anarchists.

A threat also remained from Northern Irish militants who want to destabilize the peace deal in the British province established in 1998, it said.

"Terrorism will remain a major threat over the coming decade, with a more diverse range of material and political causes, new sources of radicalisation and evolving tactics," the government review said, promising a "robust, full-spectrum approach in response."

Britain suffered four deadly militant attacks in 2017, including a suicide bombing at the end of an Ariana Grande concert in Manchester which killed 22 people.

Earlier this month, police said they had foiled three attacks since the start of the COVID-19 pandemic in March last year, and 28 plots since March 2017.

The central plank of the security approach will be the creation of a new Counter Terrorism Operations Centre to bring together police, spy agencies, government officials and elements from the judicial system.

It said this would improve Britain's speed of response to incidents and help stay ahead of emerging threats.

The review also warned that poor governance and disorder, particularly in some African and Middle Eastern states, would provide space for extremist groups, with "a realistic possibility that state sponsorship of terrorism and the use of proxies will increase."

"It is likely that a terrorist group will launch a successful CBRN (chemical, biological, radiological or nuclear)attack by 2030," it said.

The review also said it would aim to improve delivery of the counter-radicalisation program known as Prevent, and work with technology companies and allies to make sure there were no safe spaces online.

It would also make it a legal requirement for owners and operators of public spaces to keep the public safe from terrorist attacks, while working to strengthen aviation security, to "ensure the effective implementation of global security standards, anticipating evolving threats to aviation."